The other night, after our 4th annual Hannukah party, which usually isn’t on Hannukah, Jordan and her friends went out dancing. I am always nervous about this late night stuff because of the incident two years ago when they were rear ended by a drunk who then left the scene of the accident. It was not an accident – he was drunk, got in his car, drove right into them and upon hearing a parent was on the way, fled. Alex wrote down their license and at 4 in the morning they (cops, David and kids) found the guy, identified him and proceeded with criminal charges which were later dismissed because the guy said it was his cousin from Costa Rica who had been driving, and the cousin was long gone. What crap. The kids did the right thing and pressed charges, and we went to trial. They all came home from school to testify. As soon as I saw the jury I knew the charges would be dismissed. It was an all white jury in Northern Va. It was obvious they felt sure that these supposedly entitled children shouldn’t have been out at that hour and the poor immigrants were just trying to survive. Anyway, I awoke Saturday at 3am and asked David if Jordan was home. 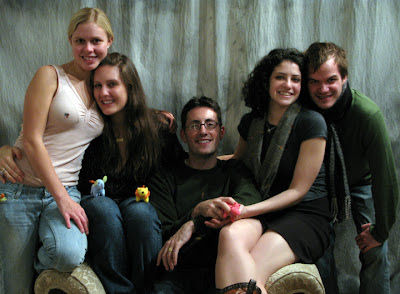 She had promised not to be late but would call if she was. He got up and came back to bed announcing that she was not home, having looked out the bathroom window and not seen the Volvo. “Damn” I said. “Call her”. And he did, and she answered the phone with a sleepy voice. “Where are you hon?” I heard him say. He hung up and said, “She’s in her bed.” I was a bit incredulous. “I thought you checked. I said. “Well” he answered “I checked -- and the car wasn’t there.” Needless to say, the car was there, he just didn’t see it and he never looked in her room to see if she was in bed. The worry was for naught. (Don’t you love that word?) But that’s not what I wanted to talk about. It only skirts the subject, which for this blob is traditions. 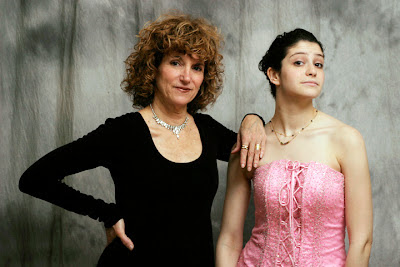 A New Year's '06 snap: Dressed Up and Stayin' Home


Traditionally, traditions are things that have some meaning and that you repeat year after year. The Burnetts have had a few celebrations that became traditions (I’ll get back to Hannukah) and we both looked forward to and enjoyed them all at the time we were involved. There was a time when we did an annual Meat Loaf Cook Off. Now that I think about it, there was only one and it should have become annual but it was too much trouble and the host, who owned the restaurant where it was held, won the cook-off, so everyone cried fowl (even though no one used turkey), but had a great time. At about the same time we had a Super Bowl party. It started at our house on Q Street and then moved to the Evans on S St. above Dupont Circle. No one ever watched the game because Super Bowls are infamous for their boring nature, but it was held for at least five years and the crowd grew rather than diminished. Then the Evans moved to upper Northwest, and the party was terminated.

There was a time when we always went to Germaine’s Asian Restaurant for New Years, and in fact, that is where David and I announced our engagement. David said he had important news to share, and proceeded to speak in what appeared to be Japanese, while David Kennerly did simultaneous interpretation in English. Everyone was laughing so hard they missed the announcement about our engagement. But, three weeks later we were a married couple who lived happily ever after. The End. Not really, it was just the beginning. But then, I can’t remember whether there was a fire at Germaine’s or it just got too hectic, so we stopped going out and started to have a New Years Party at our new house in Arlington. This tradition was well documented by all the photojournalists on the invitation list, as well as the host. And the photos were an additional way to preserve the memories. People loved the David “couples pictures”, and they were often the best picture the couples had ever had taken. It was always a great party and although the invitation list grew and changed depending on who was around, the feeling of looking forward to a new and exciting year remained consistent—as did loads of food (I always made blini and caviar, lobster salad, and Raclette –a melted Swiss cheese thing with boiled potatoes and gherkins) and there was never a shortage of drink. But then, a few years ago, things changed. Caviar got prohibitively expensive, and too many friends were sick or had died. I didn’t have the energy to celebrate another year. So we decided not to invite anyone and (we did get dressed in formal wear) but we stayed home and took pictures.

I have talked on and on about Thanksgiving, at first celebrated in Miami Beach, then Washington, and finally New Jersey. I have also blobbed about Christmas Eve and Christmas Day – which are also New Jersey celebrations because that’s what that tradition dictates. On Christmas Eve we go to Ronnie’s for an Italian seafood specialty and a glass or two of home made wine. Then on to Pam’s for Lasagna, gift exchange, and a couple of more glasses of wine—not home made. After dinner, gifts and song, we get into our cars (we do it carefully) and drive about ½ mile to see the ‘luminaria’ in Mountain Lakes. That’s when rich people light candles to enhance the look of their spectacularly Christmas decorated homes, and Jews drive around looking at them. I’m kidding, everyone looks, Jews just do it with envy in their hearts. Finally, we proceed slowly home to await the Bloody Marys and fine food fare at breakfast in the morning. The best part of the morning was always that our mothers, who never talked when we were in high school, finally got together on Christmas day and developed a once a year very dear relationship. We are hoping that this tradition will keep going even though my Mom is across the country and Joyce’s mom passed away a few months ago. But this is a ‘wait and see’ if our kids want it to continue. I am a bit doubtful since children have their own lives and want to make their own traditions, but who knows.

I told David that I didn’t want to have anymore traditions. I’m happy with the ones we still have but I think that traditions are for people who need some structure in their social life. People who know they will be in a certain place every year. And that doesn’t work for me anymore. So we went to Milwaukee for Thanksgiving, it was totally stress free. Yes, maintaining traditions can be incredibly stressful -- so who needs it. Maybe we’ll go to Seattle next year. New Years will be spent in St. Helena (Napa), with some people we know but most will be new friends. Next year we might be home, New York or on a cruise. (I just threw this out there for a laugh). I think it’s time for us to take a chance, and throw caution to the wind. When my kids were little and there was a special moment I would say “close your eyes, remember what you saw and felt, and make a new memory”. If it’s good enough for them, it’s just fine for me. We’re just sayin... Iris
Posted by Iris&David at 8:17 PM

The drunk drivers seem to always have the rights..never the victims..I'd seen this myself a few years past when called into a jury selection and a scumbag was charged with 3rd offence DUI. As soon as they heard I was a fire dept. responder, they saw to it I wasn't on the jury! Some justice,eh?That's La.,where it evidently takes 50 times for a subject to be jailed for DUI!

Hey, don't throw TOO much caution to the wind..if going on a cruise, bring your own chow..we'd like to hear from you and not about you..

It's good to break out of old traditions and go away on New Year's, otherwise you end up doing things that nobody can remember how they started just for the sake of the tradition. Perhaps you'll accidentally end up building new, better traditions...

But... I need my raclette at this time of the year! Even in a small circle of friends. Cheeeese!