November must be Workshop month. However, unlike the ones I used to be invited to help teach (Maine in the summer) the ones this month have been in slightly less obvious locales. The weekend of October 26th I worked with a team from National Geographic teaching Vietnamese – American kids in New Orleans the finer points of shooting, and how to deal with subjects in your own neighborhood.

This week, after a longish flight from Newark, I landed in Amsterdam, my favorite PhotoCentric town, to work with the World Press Photo “Master Class.” Master Class started about ten years ago, with the idea that WPP (www.worldpressphoto.nl) would bring together a dozen promising young photographers (the ‘students’) from all over the world, in most cases under 30, and have them spend a week being tutored by a half dozen “Masters”, themselves from a variety of countries. It has been a terrific week of trying to sort out the new photojournalism from the old, where it’s all headed, and what we are trying to do with it in a world bombarded with digital stuff from every direction.

The students come from Russia, Argentina, Italy, UK, US, China, Germany, France, Iraq, Belgium, Poland, and Bangladesh. The “Masters” (true, I'm not really ever going to feel comfy with that handle..) hail from UK, Sweden, Bangladesh, the US, Germany, and Denmark. It is a great team of people, serious in their craft, yet full of good humor, and it makes the long, very long, extremely long (8 am till midnight?) days fly by. There are a few very cool things. They have one of those little ‘pod’ expresso machines, and there is even Decaf, though I suppose I’m considered a wus for being the only one drinking it. The presentations have been terrific, and the one-on-one ‘s with the students are also quite enlightening, even though they run forty minutes. At the beginning, I said that I thought I’d have trouble getting through 40 minutes of Cartier-Bresson pictures (ok, my mistake!). Well, I repaired that faux pas, and the pictures, I have to say are quite terrific from some of the photographers. I have already figured out with two whose work I really like that we’ll trade prints (that s the way you cut out the gallery chunk, and go straight to the source.)

Holland remains the kind of place where you can see how they keep the water out: they are buttoned up on the things that matter. Like keeping the dykes repaired, and water more or less under control. 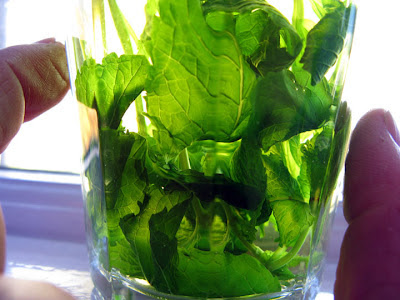 And the lesser important stuff (i.e. buying a single Joint in a coffee shop for five bucks) is done with intelligence, and a decision NOT to imprison a few million people for no reason. For the record, I didn’t smoke anything but a stogie I brought from New York but the freedom of choice thing is pretty impressive when you compare it to the way we Yanks feel a need to spend megabillions on controlling something that probably doesn’t need that level of control. Oops, I forgot. 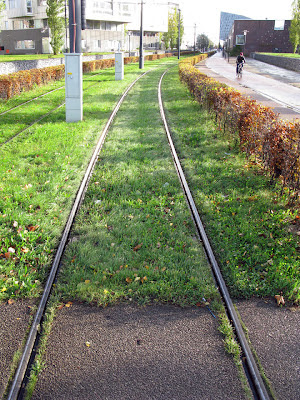 How do you NOT love a place with grass on the tram tracks?

Today at lunch I was the recipient of a “swell gift”. Knowing of my fetish for the weird and oddball camera, Jan Garup, the very talented Dane who is part of our team, gifted me a new copy of the recently re-issued DIANA camera, the little plastic bugger which was the precursor of the Holga. 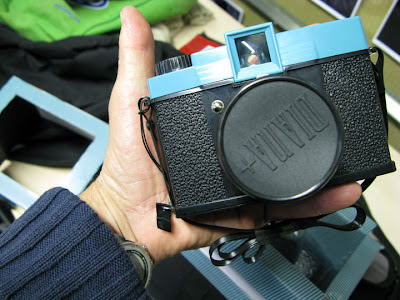 Made of nearly all plastic, the DIANA was the first of the ‘lighter than ten Oreo cookies’ plastic jobs of the last decade. They were imported from Hong Kong starting in the 70s, and become cult icons. I first became enamored of the fuzzy/sharp/fuzzy look in a book by a guy called Eric Lindbloom who was not only a helluva photographer, but a smart guy as well. Poor fella, he had to make three, or was it four? trips to Florence, Italy to shoot pictures of statuary with his Diana cameras. Yea, tough life, eh? All that Florentine food and drink, on a grant, to take pictures . (Editors Note: Where the Hell do I Stand in Line for THAT one?) His book, Angels at the Arno was a wonder when I picked it up at a Vermont bookstore one year on our annual gallavant to the Armani outlet store summer sale. Great pictures. What more can you say. The combination of art and commerce. Meanwhile, when I have a free minute, which I don’t have much of, I’m trying to do some additional writing about my adventures in Iran during the 1979 revolution for a book which should happen next year. I will say this on behalf of keeping a journal: You memory, rock solid as it might once have been, does fade perceptibly after thirty years, and note taking really should be practiced if you want to remember what you saw, thought, and felt.

Our hotel, the Lloyd Hotel, a former Dentention Center, is in the newly reclaimed part of town, just east of downtown. Its on the water, nice views, some funky aluminum apartment buildings near by give it an air of modernity. The hotel, though has it’s colorful aspects. Most rooms (all are different) do not really separate the bathroom from the bed room. I have a spacious room, about 12x30 feet, big squishy feather blanketed bed, and just a coin toss away, is the sink, the shower, and the Loo. Im solo here, but I could forsee that the lack of any privacy might eventually create some issues with visitors who aren’t really ready for the NoPrivateDoodie arrangement. 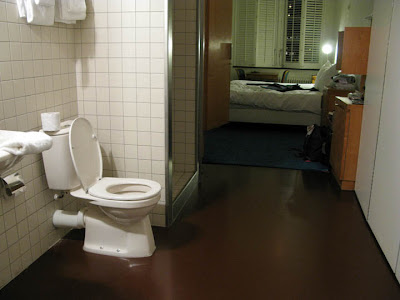 It’s a kind of “at home” feel, very unprepossessing Dutch atmosphere, and after two days, I even found where the closet was hiding (opposite the sink, in anyone asks). They have a swell breakfast buffet with a series of non-brown food group items (how UN-EmbassySuites of them ) including adorable little strawberries, cucumbers to refresh you, and a cumin/caraway cheese which my sister in law Els would surely run a mile for. 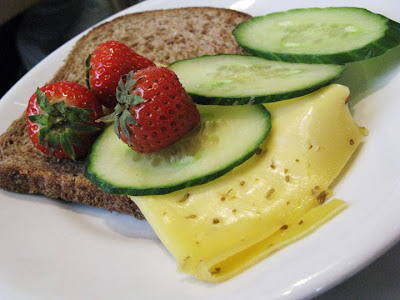 Two more days of trying to be smart and meaningful and then back to Newark (did someone say Reservoir Tavern?) Friday night. Thursday evening I am the star speaker and in honor of which they are LiveNetCasting my speech (bring a beer, and put your feet up.. oops, its only 11am in NY then… lose the beer) to the Masters, Staff of WPP (who we do love), and the Students as well as a group of Dutch photographers invited for the occasion. You can tune in here on Thursday 11am Eastern if you want to sample the new technology. The students,

At the Tram, en route class...

having been chosed in the spring, spent part of the summer each working on a common theme: Fragile. A book with their work is being launched after my speech, so this is a kind of big deal for everyone. Ill try not to be too foolish on cam, though, let’s face it, I can never guarantee I won’t be. It’s on the tight rope, no net, well actually the INTERnet. Come drop by. (its www.worldpressphoto.nl) More wisdom to impart, but first I have to ride up and down this amazingly reflective elevator a dozen times. We're just sayin! ..David 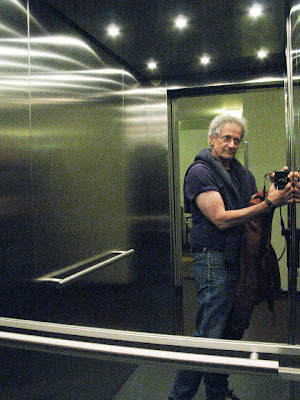 Fun, but I don't FEEL like a Professor even though my students keep using THAT word.

Give me a report on the 'new' Diana. Was thinkin' of gettin' one with the Lomo funky ring-light attachment.

I did not like the grass growing between the tram tracks in Romania when I landed there right after they 'dispatched' their dictator for life. You're eating better than I did behind the fallen iron curtain.

David I can't tell you how happy I am for you that you didn't have to do "number two" in front of strangers. Especially foreign ones.

That's why I never turned to a life of crime - Prison would embarrass me to death- could never do poo-poo in front of a guy named Knife,or Scare Face, or Shelly and Gus and such.

Maybe a Wendy or Toby... yeah for sure a Toby...but certainly not around the Rocko crowd. I did go "number one" in front of a guy named Pooch once. Well, not actually "in front" of him, it was beside him at a urinal. I mean its not like Im weird or anything.

Still,the guys name was Pooch so it wasn't exactly a laid-back visit to the mensroom. You see, I didn't know why they called him Pooch. I just knew that he was three times the weight and two feet taller than I was. And it can start a man to thinking oddly when you are standing beside a big tattooed "Pooch" in a public place of private business.

I still don't know why they called him Pooch. I assume now that it was a dog thing. Looking back,he did own a Great Dane. Kinda goofy dog though,would walk straight into walls nose first like it was blind or something. In my opinion there was nothing great about that Dane.

Looks like the new diana is going to be less of a duct tape hog than the holga.You seem to be teaching a lot lately.Thats good.Maybe it's the new Doctor preface?

Did I ever tell you about the time I tinkled in front of a guy named Pooch? Anyway...glad your open-air lavatory experience was kept amongst yourself. Some things just need to be kept local.Kinda looks like my old college dorm.

I guess I should seek some help on this one. "Pooch trauma", that is. I seem a little fixated. Thats usually bad. Our new neighbors seem like fine folks, this might be a good way to "break the ice" without seeming too nosey about them.


I keep trying to r-e-l-a-x
sometimes i have to stand in the shower, and contemplate the Relax thing. Then i shovel a hand ful of pills down my gullet, drink some dutch water( i always ask it... are YOU the molecules who tried to hustle by that kid with his finger in the dyke?) Finger in the Dyke? Pooch? What up, dude?!

Just had a frickin annoyance with google eating my commment. Out of the no-door shower, where clearly someone named Pooch has been readjusting the nozzle in my absence. The floor began to be flooded and i leapt out, water cold and all over the place. Who messed with my settings? Is Pooch the Maid now? As I leapt to the pavement, away from the shower, all i could think of was Pooch's roomate from Worcester, the one in 7 to 10 for using a starter's pistol to rob a 7 - 11.. whose comment of "wicked retahhhhhhhded" seemed appropos. My feet are wet, but im off to breakfast. That is NOT a non sequitur.

Let go of the 'inner' Pooch.

Think, "Pooch is afraid to pee in front of me. I am the top dog in this here toilet."

Make sure you aim is accurate so your feet stay dry.

You know David,thats why they wear those wooden shoes, so you can float in the shower.

Kudos to the Professor for staying away from the dyke jokes...I know it was hard.

look at those guns!