Jordan had a wonderful boyfriend when she was in high school. Tony was so terrific that we have come to set all boyfriend standards around him. He was the kind of guy who was always a good sport. 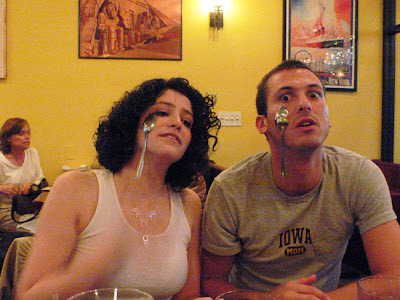 Tony and Jordan, avec spoons
Like when Jordan wanted to do some theme event, he would always accompany her fantasy. So for their prom, they went as Adam and Eve and wore almost no clothing. At first their garb was covered by prom clothes but then they removed the actual clothing and appeared in these tiny little costumes that Jordan put together. Anyway, Tony was always good humored about Jordan’s silliness and it was delightful to watch.

We met Tony’s parents at school function or when the kids went to some dress up event. They were as much fun as Tony and over the years we came to like them separate from their son and our daughter. After the kids broke up—but remained friends, we went out to dinner with them or invited them to parties we were doing which we thought might provide some laughs. Ann and Donn participate in ‘Iron Man’ events and (triatholons). They are healthy and fit. We are healthy and struggling. Before we knew them, when Tony talked about their accomplishments I could only think— “What could we possibly have in common with these fitness guru’s?” As it turns out we all like to laugh and have fun and that seems to be enough for a great evening.

When the kids were in school (they went to a very fine alternative public high school which was ranked eighth in the country for academics) they learned many important things. Much revolved around history, English, writing, the arts, science and math. But they also learned about trust, leadership and there were things they mastered that I could not even imagine one would consider and important part of education, like spoons. Have you ever tried to hang a spoon from your nose or your cheek or your chin? Maybe you have, but, to tell you the truth, I have never even thought about it, yet alone attempted to achieve such a goal. Spoon skills were not practiced, I am sorry to say, at our dinner table. Maybe it was because Jordan was an only child so there was no real audience for such a performance, but maybe it was just that we never took the time to develop such a skill – almost poetic in form. 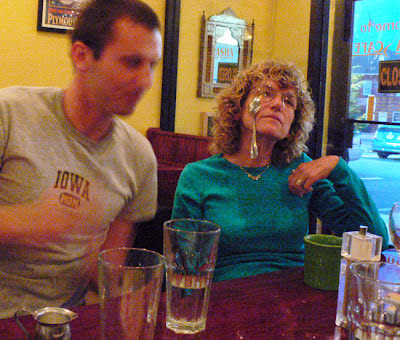 Your blobber, astonishing a restaurant full of patrons with perfect balance

Tonight, Donn was the first to drape a spoon off his nose. And he was the first to issue a challenge for the rest of us to try. A spoon will not hang from my nose because it goes up – my nose not the spoon. 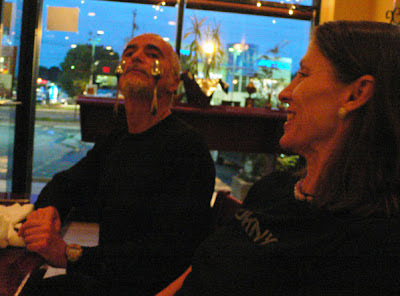 Donn, in spoon heaven, and Ann

But, after many tries, I did manage to hang one from my cheek and finally, desperate to master this fine art—off my chin. What a joy it was. I wanted to call Tina, who I remembered could not only hang a spoon, but she could whistle with four fingers in her mouth. She taunted me with her physical prowess and accused me of terminal ‘wussness’. “You’ll never make anything of yourself”, she would chide. “You’re afraid to try anything you think you can’t do”. Oh how I wished she had seen me in my spoon glory. 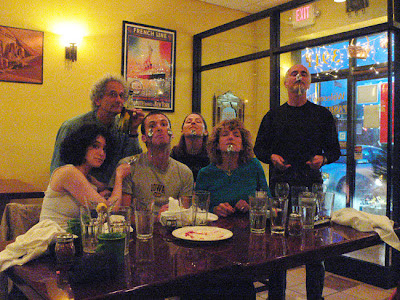 We don't do this everytime we go out, just now and then
Anyway, we had a great last minute evening and accomplished many things. Don can hang the spoon from his ear, nose chin, and cheek, probably while he’s running a 10K. I think I’ll just practice sitting still and see where the spoon winds up. We’re just sayin...Iris
Posted by Iris&David at 10:46 PM

Last time I saw spoon racing was in the mess hall at a summer time Boy Scout camp.

Here's the secret, always breath on the spoon before attaching it to a body part. The little bit of moisture helps make it stick.

Ooooh, NOW he tells me about the breath on the spoon!I just KNEW the super-duper glue was a poor choice!