Genes Can Be Your Friend

Genes are pretty remarkable little things. Take for instance the picture Seth sent the other day. It’s a sweet shot of Seth and Zak asleep. When you look at it, Zak looks so much like Joyce that it looks like Seth is sleeping with an itty bitty Joyce. I love that. 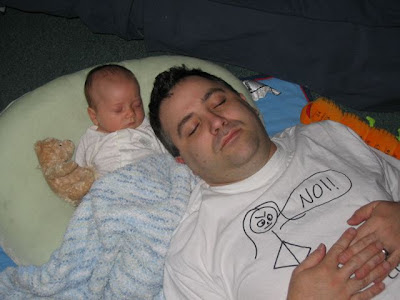 When I talked to Marthena today she was telling me that her granddaughter looks a lot like her mom rather than Marthena’s son. And when she mentioned it to her son, he seemed a little wounded. I don’t know what that’s about because as Marthena said, “he married her so he must like the way she looked”. But it’s not about the way a kid looks. We have had an ongoing conversation with my brother about who my niece looks like. He has insisted, since the day she was born, that she looks exactly like him. My brother is a handsome guy, and there are occasions when Devi looks a little like him but she actually looks like a Dutch painting, and so does her mom and it happens to be the same painting.

Anyway, my kids look a little alike, and they don’t look like me—which is amazing since they have different fathers... but they both have my father’s eyes, so maybe that’s what accounts for it. Although people say Jordan looks like me, she looks more like our nieces on David’s side—who look nothing like me, although people have said that my sister-in-law and I look alike—which is absolutely not true except we both had dark hair and she still does.

But what about their interests and personalities? Seth only ate the whites of an egg, Jordan only the yolks—now she only eats whites but it’s a diet thing. Seth never ate cheese, except the creamy kind, and Jordan loves any kind of cheese. But here’s the amazing thing. They both hate it when any food touches on their plates; at least Seth used to hate it and may have grown out of it—since I don’t have to feed him I haven’t noticed lately. And they both had a terrible fear of the tooth fairy. I may have mentioned this before but we were not allowed to leave their actual teeth in their rooms. Seth gave precise instructions about how to prepare the teeth and Jordan wrote notes to the fairy explaining her expectations. Neither was willing to give up the tooth reward but under no circumstances was the fairy permitted to retrieve the teeth.

Seth is a writer and Editor. His father is a scientist. He hated math and science and found his talent in a different place—more like mom. Although we both love Stephen King , Seth actually writes like him while I have no imagination and find it difficult to make anything up. I can embellish reality with the best, but without help, I have a hard time creating fiction.

Jordan is an aspiring musical theater performing artist. I have always been passionate about the theater and love show tunes. Thanks to my Aunt Irene, who started taking me to the theater when I was a little girl, I have been able to see hundreds of productions over the years. Jordan saw her first Broadway play when she was four—David Fisher took her to see Les Miserables. She sat through the whole thing without moving and in fact, her only conversation was to ask David Fisher not to sing along. Both the kids had great theater experiences because when Seth was little and Jimmy Carter was President we could usually get seats in the President’s box at the Kennedy Center. It was the same for Jordan only a few years had elapsed. When Bill Clinton was President, thanks to Anne Stock, and Debbie in the West wing, we were once again able to get the box for most performances—especially musicals because Debbie and Ann knew Jordan loved musicals. The only problem was that both the kids thought the box was a theater reality so the first time I took them to a theater outside the Kennedy Center, and there people who sat in front of them, they were incredibly upset. They got over that but never lost their good theater manners. In fact, at 8 Seth went to a movie and insisted the thugs sitting behind him shut up—it almost caused a riot.

And it’s not all about me. Seth has his dad’s sense of humor and Jordan has her dad’s ability to see and his disposition. We think her voice must also come from David’s mom, although my Grandma Sadie was quite the entertainer. Anyway, it’s fun to see how the kids grow up and what qualities resemble their parent or grandparents or cousins or the family pet. The one thing for sure, when the child is only months old they become the people they are always going to be—just bigger. We’re just sayin..Iris
Posted by Iris&David at 10:19 PM