“Oye Vey Es Mere Marthena”, that means “I/we am/are screwed”. Marthena, sent me some photos today which took me back to a time when things seemed chaotic but looking back they were probably quite \ simple. I wanted to write a book called “Oye Vey Es Mere Marthena” because it just sounded so funny – you know the Jewish words with the Southern name, but I didn’t get around to it. It was going to be a novel about these women who own a PR firm in DC. They work out of a Victorian townhouse and have lots of funny adventures. It was not really fiction. In fact, we had a producer or two who wanted to make it into a TV series but we were naïve and instead, some of the same people created “Designing Women”.

In 1980, Marthena, another friend Story Shem, and I started a PR business. We were former Carter Administration people who got tired of waiting in the unemployment line or hoping for a job on the Hill, and we didn’t want to leave Washington. Just an interesting note—almost all the Carter appointees got audited by the IRS that year. I wonder if the Republicans had a vendetta or were just acting the way they usually do after a win. But that’s conjecture.

Anyway, we knew we couldn’t compete with all the big firms in DC so we marketed ourselves as an “access” service. I’m not exactly sure what that meant except we created the aura (otherwise known as smoke and mirrors) that we had and could give a company, person or group, access to anyone and anything all over the world. The idea of an access service, which we called “Arrive Unlimited” (the Secret Service always said “Signal arrive arrive” when the President arrived—how clever were they?). So Arrive seemed like an appropriate name, just fun and unusual enough to indicate that we were different. I think a newspaper reporter once called us a “mom and pop shop” but we were without pops.

Because we claimed we could do anything, we got lots of different contracts. Our first, thanks to Story’s future husband Michael, was with Warner Communications. Steve Ross wanted the US to host the World Soccer games and thought if President Reagan played soccer with Pele –who was owned by Warner – it would convince the soccer powers who were, that the US would provide a perfect venue. Arrive put Pele in the Rose Garden with the President, but the World Cup went elsewhere. However, they paid/ we earned, a great deal of money, and he gave us other contracts -- all done on a handshake. We even did cable franchising in a number of cities including Cincinnati where Jerry Springer was the Mayor.

It was a wonderful business because there were no limits and no parameters. We did real estate openings, communication strategy for scientific organizations, guided tours with celebrities, international movie premieres, political advising for activist organizations, fundraising and parties of all kinds. Our antics were non stop. For example, we would not only auction ourselves and the Victorian house for a benefit. we would dress in maid’s costumes and serve, just to add a flair. Or when Michael was photographing all the powerful people in DC we provided the venue and the drama. Warren Beatty hired us to produce the premiere of “Reds” and Columbia pictures hired us to do the premieres of “Gandhi” in New Delhi, DC and Atlanta. And we were really good. Not only did we produce the events, which turned out to be multiple events, we helped the stars with their visas, worked out scheduling problems for the company and I had the good fortune to spend a day with Danny Kaye who represented UNICEF—the organizational partner. It turned out that Danny went to elementary school with my Uncle Phil and Aunt Sally—so we sang school songs like “PS 149 is the School for Me” -- which I believe he recorded on a album, but not with me. We had lunch and many laughs riding around in the limo provided by Coca Cola. They owned Columbia pictures so they were the corporate partner. They also owned Sterling Vineyards which provided us with many months of good wine. But adventure before during and after the premieres are two other blobs. 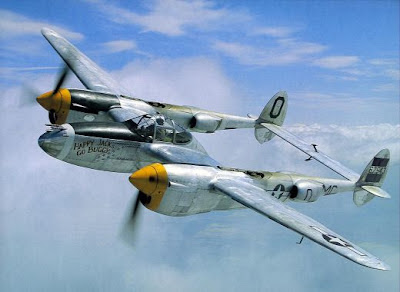 Getting back to Oye Vey Es Mere Marthena and the picture she sent today. One of the most unusual contracts we almost got was to find a way to get some WWII airplanes out of the ice in Greenland, where they had been frozen for some 50 years (6P38’s and 2 B17’s). We were supposed to find the right people to raise some money and get the US and Greenland to agree they could be dug out and then we would find a way to remove them. I think that was the job description. John Dykstra’s team (Star Wars) came to my house -- and were going to sniff cocaine, before I wiped it off the table because I thought it was schmutz. They wanted the planes for a movie. It never happened for us, but someone actually did succeed in prying them loose and that’s the picture she sent me, which was very nostalgic. It also made me think of the other night when we attended a USFund for UNICEF event. 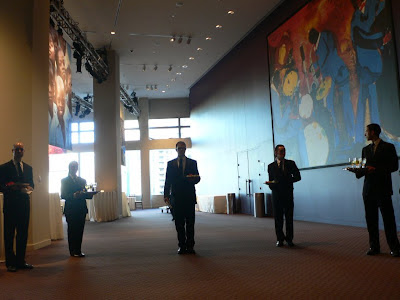 The Waiters at the UNICEF event, getting ready to be ready

All this is coming together as you will see. The UNICEF event was terrific (remember we worked with UNICEF) and the venue was fabulous. It was the Allen Room in the Jazz area of the new Time Warner building. (Remember Steve Ross). And it was an event (not unlike many we did). Except, at 6:30 when the reception was supposed to start, no one had the OK to open the room. So the guests stood on the periphery, while the service people stood uncomfortably, around and tried to be serious. (They are all aspiring actors (masquerading as staff), so it reminded us of Jordan. Who graduated from bartending school yesterday with a degree in mixology.). David, Harriett and I were astounded at the lack of event coordination. But the dinner was nice and the evening great fun. And after it’s all said and done—that’s what makes a memorable event – just not one we would ever design. We’re just sayin...Iris
Posted by Iris&David at 12:36 AM

"The twin tailed devil" as the Japanese called it in WW II.

I had a friend who helped design the P-38. Paul Spees. Wonderful man. He work for the FAA on airplane standardization and safety later in his career. He did a lot to make sure air travel was safer. He also love to go to gardens to take photographs. He then would visit nursing homes to show the photos to those who were shut-ins.

Just sent out an e-mail yesterday about "Glacier Girl" making its first successful trip to England after being restore from its time buried in Greenland Ice.

You didn't do so bad working as a cover operation..sometimes you have to find different ways to open specific doors!
I have an Honorary Degree in mixlogy (kinda) from some years past, with rocket fuel long isl. iced tea honors..Rx:Take one of those, and stay away from open flames..
Dr. W