We went to see “Beyond Glory”, a one man show about men who were awarded the Medal of Honor for heroism during a war—in this case WWII, Korea and Viet Nam. The stories were taken from actual interviews done with each of the awardees including Senator Daniel Inouye, and Admiral James Stockdale who ran for VP on Ross Perot’s Presidential ticket in 1992 (“Who am I? Why am I here?) . Stephen Lang, the writer and star gave an amazing 80 minute non stop performance. People were so moved that the theater was silent for the duration of the show. I mean there was no clapping and hardly any coughing. The New York Times gave the show a favorable review with almost no political commentary. We were moved by the reality of the material as well as the strong performance. 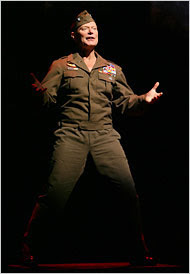 Stephen Lang in Beyond Glory..just great!

After the theater we were hungry but were determined to try something new. When I’m on anywhere from 6th through 8th Avenue in the 40’s I’m always tempted to go to Joe Allen’s, Orso or Ollie’s for Chinese ribs. But we walked east on 46th into Little Brazil. We hadn’t had Brazilian fare for months or maybe years. It’s a lot of meat. But we walked directly into the middle of the littleness. I think it may be called Little because it only runs about a block, though there are quite a few restaurants.

When we reached the middle of the block we were approached by a guy with a cigar and wearing a straw hat. “Come over here” he said in a most friendly manner. “Come here and look at the menu. This is the best Italian food in NY.” I know I don’t have to tell you how many great Italian places there are in NY. 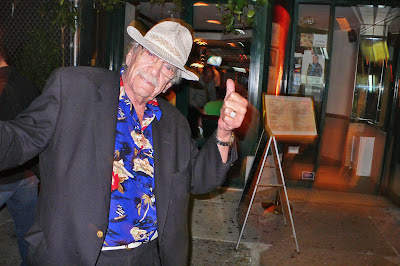 Alan at work in front of Via Italia

“I don’t think so”. I responded trying to step to the side. “We were kind of thinking Brazilian. Which one is good?” He laughed and told David to check out the one across the street (Via Brasil). He admitted it was good but also shared that it was expensive. “I want the pretty lady to come inside and look at the food we’re serving here.” I agreed to look at the food—but it seemed everyone in the place was either waiting for their order or had just finished eating. I went back outside not satisfied but entertained. “What’s your name” I asked. “Alan Kravitz” he said. “Do you have family in Philly? My friend Joyce Kravitz lives there.” I said. “Sure” Alan relied. “She’s my cousin” And he laughed.

David was coming back from across the street as four women approached the door. “We’re back” they said. “See we told you we would be back,”one of them said. I was impressed. The guy was good.

So I suggested, “OK let’s just do it. They have carpaccio and we haven’t had Italian since Jordan went on her diet.” And in we walked. “Order the veal chop” Alan suggested. “And the wine is good, very good.”

We ordered two glasses of chianti. They came in big glasses and were nearly full. It was a nice change from the $9 quarter of a glass of too chic wine you get in most places today. The bread was crusty and when we asked for oil they mixed it with salt, Pepper, and cheese. In addition, when I asked for oil for my carpaccio, they brought a bottle of black truffle oil. What a nice touch. I would have been just as happy with the truffle oil in the wine glass, but that is not to say that the wine wasn’t very good.

The carpaccio and the parmesan were perfectly sliced, rested on a generous amount of arugula and accompanied by just enough capers. While we generally over order, we decided that we would do the veal and a home made gnocchi with Bolognese. David is quite particular about Bolognese but “what the hell” he said. “Let’s take a chance.” Both were good, maybe not the best in NY, but we haven’t had better and the cost was quite reasonable. A substantial dinner, with wine for both of us, with tip was $89. Alan came back to buy us a drink but David had disappeared to the table with the four women who had ”come back”. He was deep into conversation about where they were from and what they were doing in NY. They were four friends who had come from Plattsburg, NY, to buy a ‘mothers’ dress for a daughter’s wedding. The six of us closed the restaurant, called Via Italia, and which is well worth another visit. And Just FYI, Alan sells boats on Long Island, but as a widower three times, he likes to be out in the evening so he stands in front of Via Italia and, as a salesman, convinces people they should give it a try. 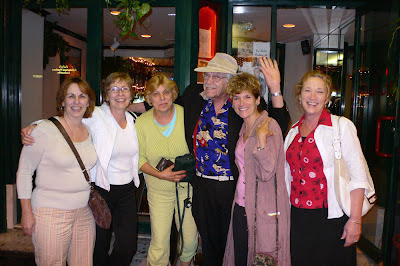 Alan (you know, Joyce's cousin), Iris, and the Plattsburgh ladies

Today we schlepped on the subway to the Bronx to have lunch in the ‘northern’ little Italy. This meant we caught the 4 train at 59th, transferred to the D, because the trains are screwy on weekends, and took a bus from Grand Concourse to Arthur Avenue—the Little Italy of the Bronx. (Going back was more complicated and took an hour but an adventure is supposed to be an adventure.) We didn’t know where to go but we visited a few cheese and meat shops and looked at a few menus. The place that seemed the most active, and most like a little place in Tuscany, was Dominick’s. “Take the second table in the third row” the maitre d’ said. Maitre d’ makes it sound very formal, which it is not. “And there’s a menu on the wall in the back but don’t bother, the waiter will tell you what we have.” We thought it was much like a place we go to in Rome called Da Gino (we did a blob). A place where the waiters tell you what to eat, and unless you make a reservation as a political professional or a journalist, you can’t get in. We saw many an American tourist standing outside waiting while there were many empty tables.

The people at the first table in the third row, Rosalie and Fred Faustini, were so friendly that they jokingly invited us to share their cold antipasto. 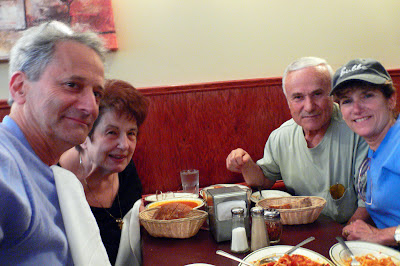 The Burnetts and the Faustinis

It looked fresh and fabulous and we wanted our own. We continued with conversation and talked about other good places in and around the Bronx and eventually got to pictures of the kids and grandkids. We ordered only one dish, a linguini with shrimp, which was wonderful. 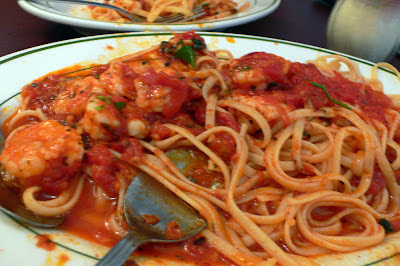 By the time we were finished, David had taken pictures and we kissed the Faustini’s goodbye. When people say that New Yorkers aren’t friendly, I just know they don’t travel to the places we go, nor do they have the same desire to meet as many people as is possible in a lifetime.

We call these our New York adventures, but in fact, they are events that can happen anywhere as long as you have an open heart and are not afraid to share a little of yourself. We’re just sayin...Iris
Posted by Iris&David at 10:31 PM

Thank goodness I had dinner before reading this.

Went to an Italian restaurant here in Westminster just after moving here. They had mashed potatoes as one of their specialties that night.

I mean I like my spuds. It's the Irish in me, but come on.