Deal or No Deal?

So many things to write about. So little discipline to do it. The more really “I have to blob about that” stuff happens, the more I’m inclined to forget about actually writing it up. I make a mental note, but like a child’s erasable note pad, it’s gone with a flick of the wrist. Is it age? Is it just temperment? I’m not sure. Our pal Walt, who moved to a farm in rural Maryland a couple of years ago is always listing for me the kinds of stuff he has to do just to keep the farm running and avoid going to pot. (I’m not sure where pot is exactly, but I do know What pot is.. and I don’t think that is what the farm would become.) All that stuff, and more or less in the order it needs to be done in. Hell, I barely get done half the work I need to do to stay semi-current. (You fans of Dan Jenkins will remember a great line from Semi-tough, his book about pro footballers in the 70s.. “I could half way fall in love, for part of a lonely night, with a semi-pretty woman in my arms.”) It seems to me that way too much of my activity involves figuring out how to get something more than half done (and certainly more than half assed), in the pursuit of excellence. The pursuit of excellence was one of the guiding lights of the early – mid 20th century. Money was always there to be spent (or invested) when it meant that something special had to be done. As it has been forty years since I started working with TIME magazine (I don’t really go around mentioning that in the current atmosphere, where the mere fact of owning forty years makes you too old to be relevant in so many quarters) I fondly remember the way money was spent, usually well spent, on what might have seemed like a loopy idea, but which rendered a great story. Boomers are now going thru what our folks did – that “you’re too old to know anything of use” syndrome which unfolded over the last twenty five years, with Seniors all of a sudden lacking all knowledge they may have once had. The Gen x and y kids, having grown up with little input except how great they are, remain, of course, rather self centered in that they think only their peers can possibly know anything real. And this coming at a time when much knowledge and experience will be set out to pasture because it’s not ‘immediate’ or ‘relevant,; or turning up on someone’s Blackberry.

Amid the Paris Hilton debacle of the last three days (ABC thinks about paying something for ‘footage’, NBC decides to make their own offer of a $Million for “footage”, and then both drop their offers when they are seen to be absolutely insulting to the News world they very nearly inhabit. (I don’t understand why NBC didn’t have Howie Mandel do their interview. Give Paris a chance to pick 6 cases… “that’s’ Hot!”…and her folks cheering her on from the other side of the stage… hey, I would have paid for that million my self! It would have been strictly ‘entertainment’ and the News division wouldn’t have sullied itself with a bunch of high-sounding spokes folks trying to say why what they were doing wasn’t checkbook journalism. Having spent years in the company of, and occasionally to the advantage of (sharing one of their Mercedes in a place with few cars..), it just makes me laugh when TV says they don’t practice “Check book journalism” Heck, they have already practiced it when they charter the plane for the Anchor, and buy 30 rooms in a hotel so the edit suite can be set up next to the ‘office.’ Even though it’s true that budgets have slinked to nothing over the last two decades as the pencil pushers have taken over and told the newsies more or less what they can get away with, TV still has the big bucks when they need it. And the really sick thing is, several nets thought Paris Hilton (“It’s Hot!”) was worth the spend for the “get.” I know we live in a world of personalities, and the marketing folks think they have to make their reporters look like ninnies (and they do such a good job of it …) but where does it end? The other night at the UNICEF event we did a drop by for the dinner / pitch. Sanjay Gupta the CNN doctor was the keynoter, and did one of those “play 4 clips”, and comment briefly on it afterwards. I have never met him in person, and based on what I see, he is on the road a good deal, chasing down stories with some kind of a medical angle. He seems like he knows what he’s doing. Sadly there are many more ‘negative’ stories around these days than purely ‘positive’ ones, but you need to do both. Malaria in Africa, post-Tsunami Sri Lanka. There are more than enough topics for discussion. But the point is, the Story should be the key thing, not the reporter. Imagine if Ed Murrow, or Cartier Bresson were obliged to do the kind of promos (usually gigantic banners hanging from a building, or one of those insipid tv spots where the personality pretends to be giving the camera that ‘I’m shocked!’ look as their eyes bear down on the lens.) Just the act of doing one of those spots falls into the category of “Gosh, I hope my career doesn’t fly south…” The night after the UNICEF presentation, we walked onto 6th Avenue and there was Sanjay again, heroic pose (I hope the photographer was well paid, though I suspect they were suitably cheated yet again…) on a huge electronic billboard. 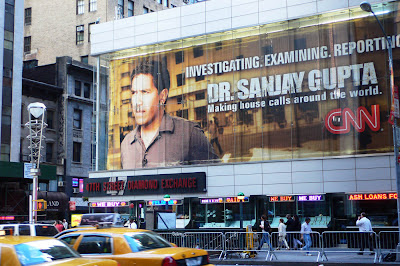 I have this thing about there being limits as to how big a News person’s image ought to be (as well as how much they should be paid, but that’s another blob). If you decide to be a real “News” person, the buzz should be about the story, not about the reporter. Once you become more important than your story, its back to being ‘entertainment’. And that fine line is something that shouldn’t be decided on Page 6, or by Billy Bush on Access Hollywood. Still, if it were up to me, I think I’d rather see the Paris Hilton drama play out the way it should: Paris Hilton --- Deal or No Deal??!! We’re just sayin…David
Posted by Iris&David at 5:14 PM

David, you should have seen the four dead trees come crashing to earth on Friday. Now we can bring the horses down to the lower pasture for the summer and not worry that a strong storm might knock the trees down while the horses stood under them.

Despite wearing hearing protection under my hardhat, and the loud buzz of the chain saw, I made sure I could hear the first tell tale cracking sound a tree makes when it start to go over.

With my steel toed boots, you've never seen a guy run backwards holding a chain saw that fast. The event isn't allowed in the Olympics!!!!!

When a tree falls in the wood, it both makes a sound and the earth jumps. Wish you could have been there to record it.

Now to the next set of chores.

Hey, landed on your blog, nice stuff. I found a cool new tool for our blogs... www.widgetmate.com It helps get latest news for our keywords directly on to our blog. I added it on mine. Worked like a charm.

Paris is often well-lit..but not the same as I visited years past..NO DEAL!I've more talent in my______finger, and more culture beneath my nails...I know what you mean about not becoming larger than the story..blend in,don't stand out..Something I learned the hard way on the road years ago, and nearly got my pass pulled!!

However, if you are a "real" news person, people get to know that and your integrity makes you famous. So why then should'nt the persons fame be the reason I look to them for an informed decision?

Maybe Murrow didnt do said promos, but he did sell cigarettes and aluminium. And he was famous. That was his way of assuring what HE thought was news worthy would be aired. People trusted HIM, he was as much the story as the story...maybe?

Lets face it. As soon as the "news" started being printed it became a product. And names sell products.

In fact, I bought a LIFE Magazine last week, a 1998 edition because they listed your name as a photographer.

It was the "BEST PHOTOGRAPHY OF THE YEAR " version. Lots of famous photogs.

McCurry,Salgado,Ellen Mark,Nachtway et al. And of course, there is your name!

I could hardly wait to get this photographic cornucopia of Tri-X joy back home.

I will be writing LIFE Magazine a nasty letter asking for my $5.00 dollars back.

Not a Damn photograph from you!

Clearly false advertising to get me to buy their product.Your name got me to buy.

Then I flipped through every single page "SLOWLY". Again, only to find your name- and only your name- buried deep in the itsy bitsy tiny weenie faded to grey letters. This time you were listed not as a photographer but as a "Nominator". Don't get me wrong, I loved Nominator. Gotta love Arnold Swarzenneger, a fine thespian. In my humble opinion he is the Austrian Maximilian Schell. No wait a minute, that IS Maximilian Schell. Never mind. Anyway still no photo!

So,as i try to make my point- If it's a good name- why shouldn't names sell the news? Most people wouldn't watch,flip,browse, or listen otherwise.

Life's out of business.

Speak to the parent company. Perhaps they can breath new life.

Breath new life into old socks? Can I launder them first?