Over 98,000 people viewed “The Gefilte Fish Chronicles” on Sunday night. We only have numbers for the 7:00 broadcast, not the 2am or 4pm broadcast on the following day. But the channel 13 (PBS) people were pretty happy about those numbers and ecstatic about the review in the Times—as were we. 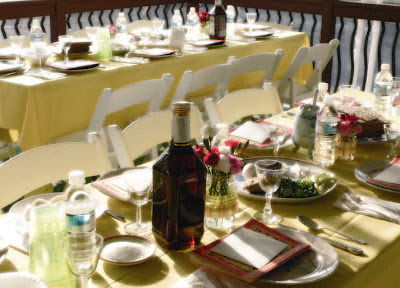 We had about 60 people for the seder last night. It was not without some drama. We tasted the fish when it was finished last week and I thought it was fine. However, Aunt Peppy tasted it after she got home and was not happy. She and thought it had no taste. We are talking about gefilte fish which, for me, always has no taste. It’s merely a vehicle for the horse radish. 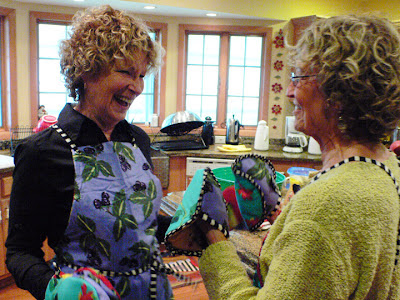 Honey & Rosalie - in the kitchen
Well, there was lots of hysteria and Rosalie, being an incredibly good sport decided to throw it all away. But then she realized how much work and expense it took to get it to the “doesn’t fall apart when you boil it stage” and she took all the fish stock we made, put it up to boil, re-seasoned it and carefully dumped in all the fish. She cooked it for about another hour and then decided enough was enough—or as we say at the Seder, Daiyanu. 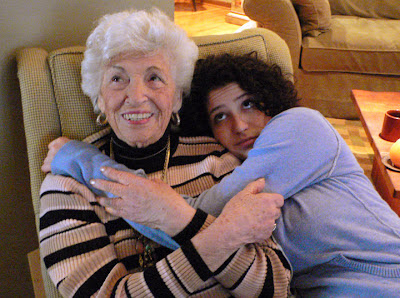 Nana and Jordan, a surprize last minute arrival
The fish was terrific. Even Jordan, who doesn’t like her fish gefilted—ate it with gusto. She admitted that she had never tasted it before because she was afraid of the jelly. Yes, there is usually some gelatinous residue that covers the fish after it has been refrigerated. But alas, it was perfectly clean. 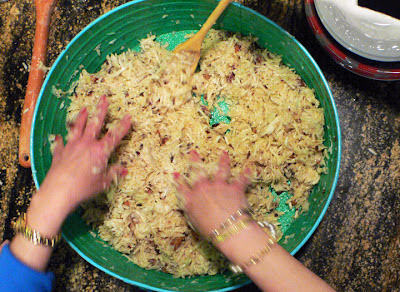 radish, schmaltz, gribenes.....heaven!
There was nothing frightening to interfere with the enjoyment. Further, the chicken was garlicy and wonderful, the cholent was actually seasoned and tasted great, the matzah balls were fluffy, and the stuffing was superb. All in all the food was a hit. You can find the recipes in the “Gefilte Fish Chronicles Companion Cookbook” but you won’t find the drama. 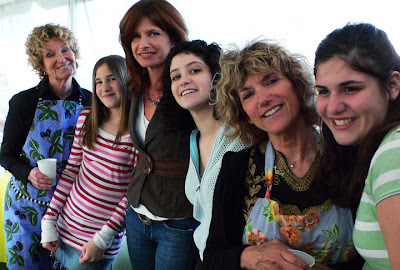 Three generations of Dubroff girls
Tonight we had a smaller crowd. We were only 20. When we arrived, Aunt Peppy was already there. She was wearing a green sweatshirt. Mom was wearing almost an identical sweatshirt. It was pretty scary—but I’m never surprised about the “twin” thing. When we were kids I would call my cousin Eden (Aunt Peppy’s eldest) to find out if her mother had been injured because my mother was complaining about a pain that didn’t make any sense. And sure enough, her mother had fallen or knocked about or something. So the fact that they hadn’t spoken in 24 hours and were dressed like identical twins (they are fraternal) was pretty funny. 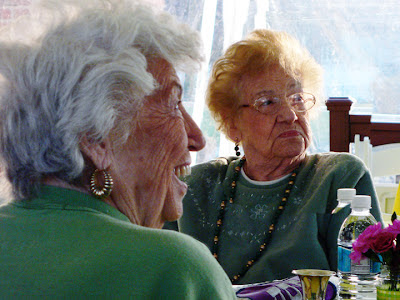 The Twins in Green
Anyway, tonight, because we were so few, it was pretty relaxed and we all took turns reading from the Hagaddah—That’s the prayer book for Passover. When there are 60 people you rush through the book in hopes that you will stay awake long enough to get to the food. When there are 20 people, you have time to savor the meaning of the holiday. 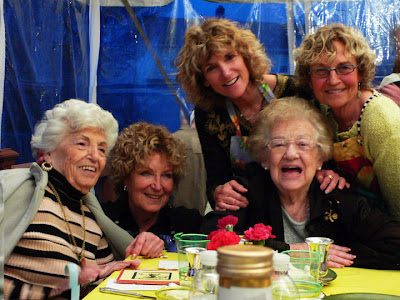 Like you can really get into what Rabbi Eliezar said about the plagues. “ How can one show that every plague which the Holy One, blessed be he, brought in Egypt upon the Egyptians was fourfold in character.” What the hell does that mean? I have been reading this for over 50 years and I have no idea what Rabbi Eliezar was saying or who Rabbi Eliezar was to say it. Then there’s three pages worth of explanation about the plagues. So there you are, waiting for your Seder meal and right before you eat you read about Blood, frogs, vermin, beasts, cattle disease, boils hail, locusts, darkness and the slaying of the first born. They seem a bit weighted to me. Like I don’t mind the hail but the boils really gross me out.

There are too many “thou’s” and lot’s of repetition of “this refers to” without referring to anything. But there is one place where “And it is said” that the girls were all right and only the boys would have to die. An historic first. There’s lot’s of symbolism and many explanations of why we do things, but the bottom line is that the Egyptians weren’t nice people, it sucked to be a slave and we sent locusts, beasts and boils to punish them for not allowing us our freedom. Be still my heart. Jews willing to camp out in a desert for forty years – no frills, food or discount shopping. 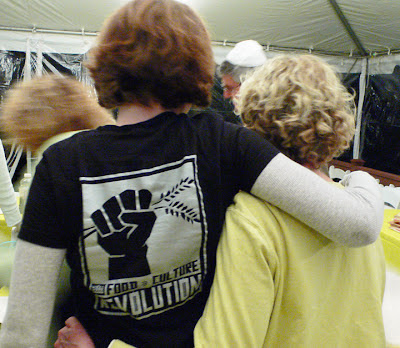 Sydney and her Nana
It was a wonderful evening. Kerry and Karen joined us which made it even nicer. A breath of fresh air is always welcome. And here’s the thing. We always finish the Seder. I don’t know any family that eats and then prays again. Actually, the only other time I can remember doing that was when I got married the first time, we ate and danced and were in the middle of having real fun when the Rabbis decided all the celebration was to be suspended until after all the praying was done—it just didn’t happen. But praying after the Seder is easy and it was all made better when Dickie read the final prayer. It went something like this: “Ended is the Passover Seder and the Gefilte Fish Chronicles. According to custom and the Gefilte Fish Chronicles we were worthy to celebrate it this year. O pure one in heaven above, restore the Gefilte Fish Chronicles in your love. And lead the Gefilte Fish Chronicles to Zion in joy.” We’re just sayin...Iris
Posted by Iris&David at 11:33 PM

looks like it was a great time, sorry we missed it...but next year we will have baby in tow. hopefully he will come soon and we will see you! Hugs and kisses.

Looking forward to next years sequel - A Spielberg Production

"Just when you thought it was safe to go back in the seder."

Again congrats on the success.

Iris,
who is the tall, beautiful redhead?
Mike