The nice thing about New York is that if you stay in town long enough, old friends, distant cousins, and all kinds of other folk will eventually pass through town. We split our time between Arlington VA, Gotham City (good enough for Batman? good enough for me!), and all those other places which engender a work related visit. New York is kind of special because sooner or later everyone comes here. You can't really say that about Grand Junction or Traverse City. The funny thing is, no matter how big a deal NYC becomes, when you're here, it's just like being in any other city, not because there isnt more to do (there is) or greater places to eat and drink (there are) but because anyplace you inhabit over time will become quotidien That is one of those French phrases which you won't find Tom DeLay using. It really means "daily" but it has also come to signify an awareness of the everyday. I just realized that Tom DeLay who has taken, among others, John Kerry to task for allegedly speaking or BEING ABLE to speak French. Remember DeLay at a RightwingLunch introduction: "Hello there, or as John Kerry would say... Bon Jour..." All of which seems curious since his name isn't D'Lay or Dee Lay or ∂´¬å¥ . DeLay sure seems French to me? Maybe he's a self-hating Frenchman who never got over the betrayal of Jean Lafite. Or his family were the peons who cut the grass for an absent Lafayette landlord, during his time in the 1770s. Not quite sure, but to have a name like DeLay, and and urge changing French Fries to Liberty Fries or Freedom Fries.. not sure I get that one.

So, whatever you call your fries, you can find them covered with just about anything (ketchup, vinegar, mayo), anyway you like them in New York. They make better ones in Brussels,and Amsterdam, but like Neil Young's girlfriend, you have to love the one your with. All kinds of those quotidienne moments invest our time here. A few nights ago we met Iris' cousin Chuck, who is building a fantastic new coop apartment building on the West side in a building which used to house a music studio, where any number of famous songs were recorded. Chuck showed us around the construction site, and on the top floors, there are more acres of blue protection material than the Vikings had on their sailing ships. It was wonderful to see a soon-to-be-amazing apartment in the early & mid stages of construction. 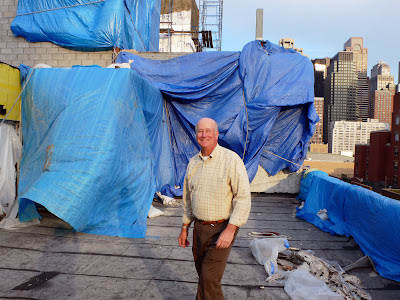 Chuck at the Hit Factory
But it was on the way home when I finally managed to let loose my little Panasonic cam on Iris. For the 5 block walk home - just like you'd walk home any five blocks in any town in the country, she was on the fone. I decided this needed not only documentation, but editorial comment as well. So, here, in a quite normal, everyday, nothing special moment(s) Madame is doing business, and I am recording it. Don't you love the way our fones have so taken over our lives? 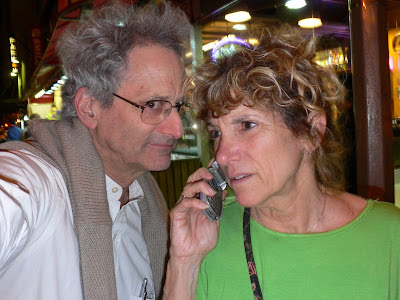 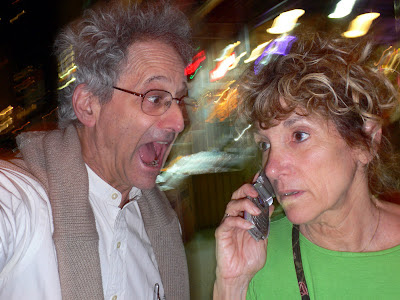 Disbelief at the corner of 54th & 5th 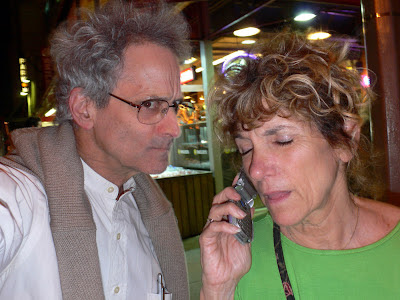 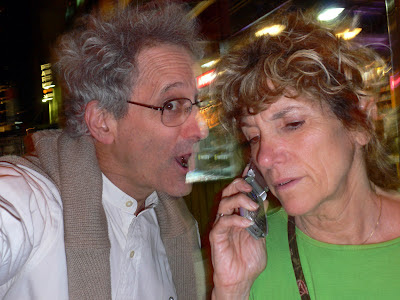 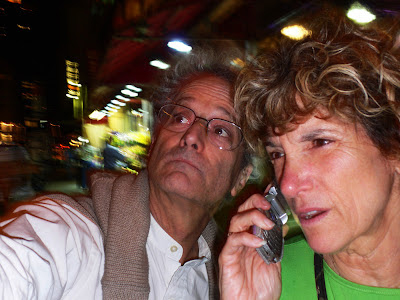 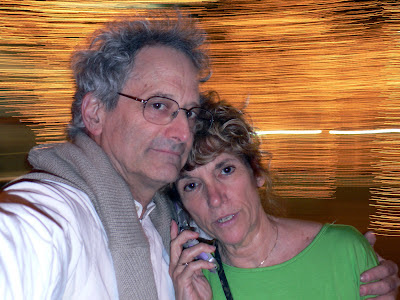 In front of the pocket park, where the world is always lit up...
Posted by Iris&David at 6:13 PM

Indeed..the BEST photo documentary is that of family!