It is beautiful on the Boulevard. You walk along and think about nothing but how beautiful it is. The Boulevard is the main thoroughfare through Mountain Lakes, New Jersey. It is a about a four mile stretch of road which runs the length of this small exclusive lake community. It’s almost as if it were designed for morning fast walkers. And it's not called the Boulevard. It's The Boulevard. As in "184 The
Boulevard." 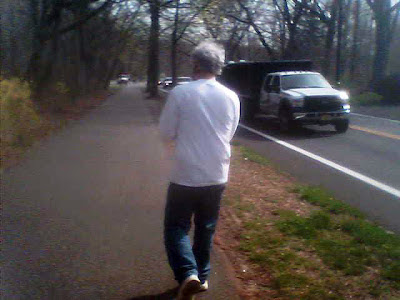 Davey walking on The Boulevard
When we were growing up it was a restricted community. No Jews, Italians, Catholics, and certainly no blacks—but there was maybe one black middle class family within 10 miles in those days, so they needn’t have worried. But it was always a beautiful place and you could only swim in the lakes if you lived in the community — so we couldn’t swim there. (Mountain Lakes is adjacent to Boonton. Very adjacent.) Luckily we had membership at the Pine Brook Country Club, which was not a country club but a swim club. It was a terrific place where we swam, had camp activities and learned to play mah jong—like mini alta cockettes. (an alta cocker is an old fart in Yiddish, we were young female farts).

We never felt that we excluded in Mountain Lakes because truthfully, we never wanted to be included. The Mountain Lakes kids were unattractive at best. They were spoiled and self centered and not particularly street smart. Kind of like the kids from West Caldwell (see my Soprano’s blog). For example, after school activities we would all go to Paul’s Diner. The Boonton kids went to the right and the Mountain Lakes kids to the left, once inside the diner. We were usually pretty good at ignoring them but they always wanted to start a fight. So on one occasion, our friend Andy (now a Supreme Court Justice in a western state), happened to be carrying a hammer because we were singing “If I Had a Hammer” -- and he did. The Mountain Lakes kids thought this was some kind of an affront and on our departure from the diner, they surrounded Andy and decided they were going to beat him to a pulp—not for using the hammer but for having it. Here’s the part where they were stupid. Andy was not just a hammer singing fool. He was very tight with the entire Boonton High School football team. When they saw a threat to one of the Boonton greats—they came immediately to his rescue. And before you could say Trini Lopez, our football team surrounded their anti-hammer athletes. It was basically a draw but they thought twice before they came to the right side of the diner or threatened any of us in the parking lot.

When David and I walk the boulevard I have so many conflicting feelings. It was a place that didn’t want me to live there. It is now a place that welcomes all people. When Jordan was in fifth grade, we moved to N.J. and she went to a small private school in Mountain Lakes. The Boonton schools were terrible so we sent her to a private school on the Boulevard. There were 11 kids in the fourth and fifth grades and school was like having a private tutor for a year. This was a very good thing for us because her fourth grade in Arlington was a disaster. They had increased the number of students without increasing the number of teachers so if you were a girl and you were smart no one paid any attention to the fact that you might want to learn something. We were grateful for the fact that she went to the Wilson School and I was grateful for the fact that it was no longer a place that Jews were not welcomed. A few weeks ago Jordan was invited to the opening of “Curtains” a Broadway musical. She was also invited to the party afterward. As she looked around she saw someone who looked familiar and it turned out to be Mrs. Borlo—one of her favorite Wilson School teachers. Mrs. Borlo almost didn’t recognize this grown and beautiful young woman, but when she did, she was just as excited as Jords.

I digress. David and I walk on the boulevard almost every day that we are at my mom’s house. We have a 2 mile path that we follow and with which we feel comfortable. It’s much more interesting than walking on a treadmill because there are sidewalk ups and downs and inevitably new houses and scenery. It’s fun to recognize the changes and try to figure out what kind of people own the McMansions and have mad exchanges in the houses along the way. We figure most of them are young drug dealers with disposable income—who may be Jews or Blacks but that’s not an issue anymore.

For whatever reason I am still a bit intimidated by the concept of the Boulevard. I don’t know why. The people who walk there are often friends and sometimes strangers who never pause to say hello but nod their good mornings and move along. When we lived in NJ and we were looking for permanent residence, we saw a few places in Mountain Lakes but beautiful as they were I never liked any of them. I’m not sure if it goes back to the “Mountain Lakes Club Community” or the “If I had a Hammer I’d Knock Your Jewish Block Off” mentality, but I just can’t acclimate to anything more than walking along this glorious path and working off a few calories. I don’t ever see us living anywhere in this area, so it’s a moot point but maybe when I grow up I’ll be able to walk the Boulevard knowing that I don’t live there by my choice, not theirs. We’re just sayin...Iris
Posted by Iris&David at 11:18 PM

God said to 'turn the other cheek', but after a while..you run out of cheeks to turn! I am glad things changed, and for the better..

I grew up in Boonton. I was one one of a handful of Jewish kids in my class at John Hill School. My family belonged to Pinebrook and I went to day camp there in the summers from when I was 6 or 7 until I was about 13 with Greta and Sandy's teen camp.

I came across your blog when I googled Pinebrook the other day to see if it still exists. Apparently it does not. Sad.

Can we start a blog for people who remember Pinebrook Country Club from the 60's?

awww awesome story...
you make that my imagination flys right next to you in Boulevrd!!!!