A Love Letter to Helen

When we were kids my mother didn’t have much time for us. She was either busy with my dad, her sisters or trying to make a living. Sometimes, when I think back about those years I feel like she could have done better. But the truth is that my brother and I are fine and we learned to survive on our own and we were always cared for—if not by one of my aunts, by Helen Costello. 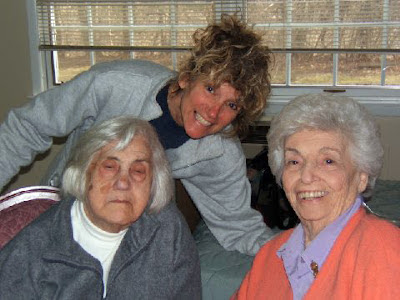 Helen, Me, and Mom
Helen took care of the house and actually, all the contents including the people. And I don’t just mean Me and Jeff. She took care of anyone who happened to be there. Like my cousins Stevie and Sheila, and all my friends. In fact, when we were in high school the principal OK’d our leaving school grounds to go to my house for lunch. Actually, it was more than lunch because Joyce, Pam, Laurie, and I scheduled study halls before and after lunch so we spent two or more hours eating tuna fish sandwiches and watching soap operas. Helen prepared the mid day meal and we all sat around talking about the drama on TV. She was with us for most of my young life. I can remember when I was little and my mom would get mad at me and try to give me a swat, Helen would pick me up and we would run into another room. No one was allowed to touch me—not even my mother.

Yesterday, Helen and her wonderful daughter Marsha came to visit mom at the rehab center. It was fantastic to see both of them and listen to them talk about old times and old friends. It’s amazing that some things never change. Helen still calls my mother ‘Mrs. Groman’ and as many times as mom says, “Please call me Rose”, Helen doesn’t.
“It’s a matter of respect”, Helen once said. I didn’t exactly understand that but in those days that’s what people did. When I thought back, I remembered that my grandparents and all the grandparents of my cousins called one another Mrs. Dubroff, Mr. Smith, Mrs. Schultz, Mr. Kaufman, and on and on for all eight of their in-laws. First names were much too familiar even though they had all known each other for over forty years.

When Jordan and Seth were little some of their friends called me Mrs. Burnett—I didn’t care but their parents insisted. Which was amusing since at Jordan’s school, the kids called the teacher by their first names, but the teacher and the parents were Mr. or Ms. Oh well, a name by any other name is still a name.

Back to Helen and mom. They had kind of circuitous conversation. Neither of them hears very well and Helen forgets what she said before. Neither of them is very good at names, so it’s easy to understand that names were too complicated. Even when mom had no problems with her memory she was never good at names. For example, my cousin Sheila had a friend named Sheila Falduto. For my mother she was always Shirley Falduto. We corrected her for a while and then we all started to call Sheila, Shirley. Anyway, Helen is a year older than mom. I always thought she was younger. Maybe because she moved around so quickly, maybe because in my young mind, people who worked for you were supposed to be younger, and maybe because she was my pal more than a parent. I loved the time we spent together. She was there for me when I was happy and when I was sad. Helen didn’t care if I was in a bad mood or I was sulking (this was often the case), she still kissed me and hugged me and loved me without parameters. 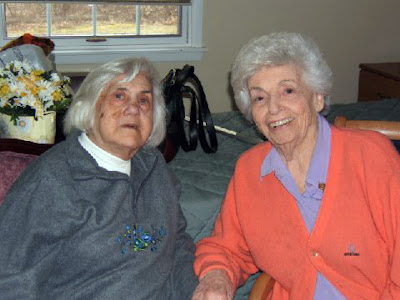 When I think about what it was like to grow up in my house with my family I have good memories and an occasional questionable memory because my dad was disabled and life was not uncomplicated. I guess yesterday for the first time in my somewhat long life, it struck me that I was actually very lucky growing up because my aunts were always around, my cousins Honey and Rosalie were great fun and there to guide me through the horrible tweens and chaotic teens, and I had Helen Costello as a caretaker, a parent, a pal and a role model for what respect really meant. We’re just sayin....Iris
Posted by Iris&David at 3:32 PM