The Harvard of the East

Growing up in the West, you don’t have the same impressions of the great academic institutions that you might if you come of age within an hour’s flight of the East Coast. Where I come from, the Ivy League was a kind of big deal, but Stanford was really the Place to Be. I was of the generation where you applied to two schools, three at the outside. I applied to Pomona (West Coast, smart but not smarty) and Stanford (my mom and various cousins had attended), and as a ‘safe’ school, Colorado College. I hadn’t ever visited any of them (one just didn’t bother) and whilst I wasn’t perhaps the most exciting candidate on the block, I had been on the Yearbook for two years, and was a student body officer. I’ve never really forgiven Mom for not making a bigger stink with the alumni office, though had I actually attended Stanford [ you may indeed read this as a TURN Down from Stanford], I know my life would have been different. Would I have become one of those gnarly overly self-possessed rich folk who think nothing of spending $14.50 for a Martini, and actually like dumping a grand on a hotel room? If so, I don’t think it would have been that much fun. On the other hand, maybe I would have become a Pulitzer Candidate, and won the one award which my brother would have actually thought was cool. We’ll never know, and while I look back at my four years at Colorado College like most students of my era as a great time, with wonderful friends, and (with a rear view mirror) some great professors, and a chance to create a great library for reading in later years. (I think these are the later years I’m supposed to be reading those books.) But C.C. represents to me one of those great institutions where the students aren’t overwhelmed by the organic presence of the school to the extent that you live a wonderful student life, and do what you ought to be doing in college – to prepare for the rest of your life. I know for sure that had I gone to Harvard, my life have gone other directions. Spending four years in that Ivy’d bastion would have made a different person of me. I knew at 17 I wanted to be a photographer, but what kind of photog would I have been? Who knows. All I can tell you is that it took some time finally make it happen. 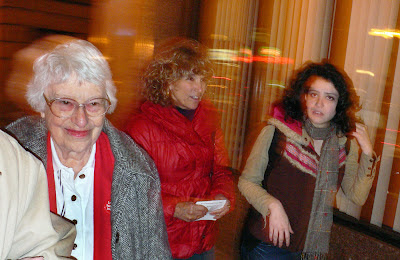 The Burnett Girls: Barbara, Iris, Jordan
Last week Jordan was one of the leads in “On the Town” at the Emerson Majestic Stage in Boston. She played the role of Hildy the cab driver, a very racy role in 1944. You know, the cab driver who more or less kidnaps a sailor and tries to get him up to ‘her place’ as fast as possible. 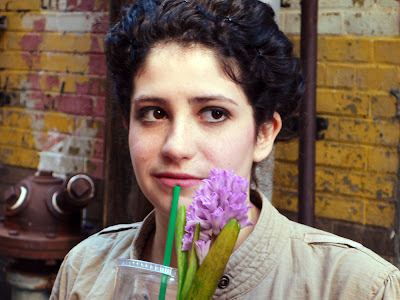 Jordan, after a performance
She seems to be a one track sex machine, and it was fun to see Jordan play a different kind of character for a change. And for once, Grandma Salt Lake was in the audience (twice, actually, Friday and Saturday nights) and had a chance to see her granddaughter in full theatrical mode. It was a great show, she was much fun, and it was one of those weekends that once again made me sorry I hadn’t had some Theater activity in my college years. During the day, with time available, Mom and took a trip to Cambridge. Loyal Utah Democrat that she is, she thought maybe we should attend a reading that Sen. John Kerry ( you remember 2004) and his wife Theresa were doing to launch their new book about the environment. So there we were, walking across the Harvard Yard, 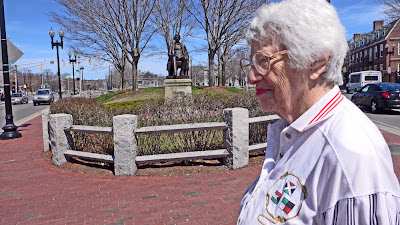 Mom in Harvard Square
looking for the Memorial Church (it turned out to have been moved the the Unitarian Church just off campus). But it’s true: we were AT Harvard. During the walk, I turned to mom at one point, and reminded her that while it may have taken forty years to do it, here we were, At Harvard! I have counseled Jordan for years to take the T to Cambridge, sneak into an Organic Chem class one Thursday morning, when, in later life people ask her about college, she can respond “I have a BFA in Musical Theatre from Emerson, and I studied Chemistry at Harvard.” She doesn’t think this is as funny as I do.

Later, over coffee, with Mom, on Mass. Ave just off Harvard Square, we called my aunt Esther, mom’s older sister (Mills, ‘1934) and told her we finally got “into Harvard.”
“We just walked in!” I said.
She responded “well, it certainly eliminates a lot of paperwork if you do it that way.” Nuff said, Auntie. There is a reason we consider her a font of knowledge.

Heading back to Boston (yes, there is Cambridge and there is Boston, separated by the Charles River) we decided that while Harvard might have interesting and well aged architectural jewels, that Stanford and Colorado College were, for us, the right paths to go. In the sixties, we always referred to C.C. as “the Harvard of the West.” So now, I can say I have visited the “Colorado College of the East.” We’re just sayin…. David

Besides wondering what possesses folks to walk into airports with loaded Glocks, you might think that would fall badly on his father’s campaign, but NBC News has just declared the State of Texas for Mike Huckabee. It’s funny what wins votes these days..Now, back to your blobber!
Posted by Iris&David at 8:49 AM

Yes..there's a time and reason for everything..chances are highly likely you would not have the life you have today..Funny thing about life, and the choices made and NOT made..You are definitely the better for it!

Damn, wish you HAD gone to Harvard, then you'd be on Wall Street, and Time Magazine would call me instead of you!

But then who would have played the part of the "one track sex machine"?

Anyway, Colorado College need you as much as you need it. They're still recovering. Grin.

well, is never too late, you at your age, can study something there, you can do it!!!!
thanks for posting