Remember, “Three Coins in the Fountain”, “Roman Holiday”, “Ben Hur,” -- well maybe not Ben Hur, but romance and Rome always seem synonymous. And so we decided we would spend our last vacation day and night, in Rome. Just us kidz, tooling around the ruins, relaxing at some outdoor cafe’s, eating gelato at the Piazza Navona, and waving goodbye to this country we love from the confines of our airplane. Let me just say that the Hotel Napoleon has a great photographer working on their web site. You would never recognize it in person. It wasn’t really that bad, just a smidge seedier than expected, a bit farther from the action than you want, and with a bellman who calls you ‘punta’ (yes – even in Spanish it means whore), even before you get ready to tip him. 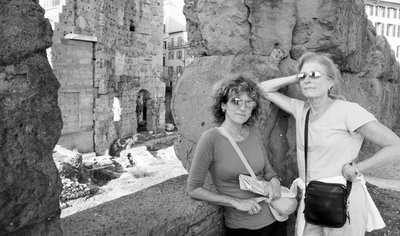 A funny thing happened on the way to.....

Whenever we drive into Rome we make it almost to the center of the city before we realize we are lost. This time wasn’t quite as horrific as other times – like when we got so lost we had to hire a cab to lead us to the train station to return the car—but it was harrowing because the horn on the rental car (dear, sweet Pablo, the Citroen “Picasso” van, a name which, by the way, bears no relation to anything the great artist ever did) didn’t work, so none of the Roman drivers (bobbing and weaving in the traffic) were aware of our presence. Actually, harrowing doesn’t come close to describing what we experienced. But we made it to the hotel without either having a road accident or killing each other. The latter was clearly a more likely outcome, after the 34th map reading, and realization that we were nowhere near where Mapquest had told us we should be.

Our plan was to arrive in Rome with plenty of time to make our lunch reservation at Da Gino, another of our favorite Italian eateries. Da Gino is close to Parliament so it is a place that politicians and journalists frequent. If you’re cool you don’t look at the menu. A waiter or Gino will decide what you should eat and what wine will go with the meal—it’s always house red or white. If you look like a tourist, arrive without reservations, and don’t have a political credential, you will not get seated. They will let you wait but they will not ever feed you. It is not a snob thing, it’s just how they run the place – so if you’re going, call ahead. (It’s in a tiny walking street just off Campo Marzo.) 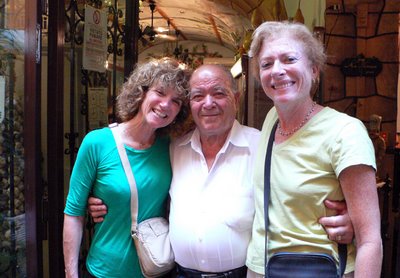 
After lunch we walked the ruins. The old never gets old. They remain breathtakingly beautiful which is eerie since horrible things took place in so many of them. It’s hard not to be moved and emotionally exhausted by the impact, so we walked back to the hotel, stopped at a cafe, rested and set out for Pizza and gelato in any Piazza that felt welcoming.

David was flying home Continental and we were flying American, or as I now refer to it, American’t airlines. We were supposed to take off three hours before David—it didn’t happen. When the pilot came on to announce that they found something dripping from an engine and they weren’t sure if it was water or oil, I knew we were in trouble. If they can’t smell the difference between water and oil, can you imagine they would know the difference between up and down. Anyway, we were down for the day and night. 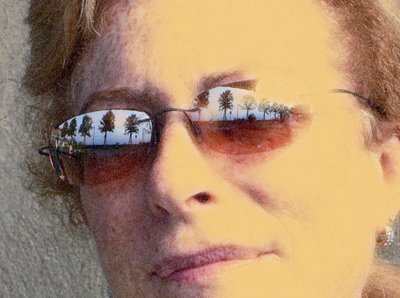 By popular demand this shot of Soozie and the Tuscan trees...


OK. We were happy they found a problem before we were in the air. But we either were all adults or accompanied by adults and some simple truth would have made a big attitude difference. And speaking of attitude, the crew of flight 285 was the nastiest group of staff people I have ever experienced and that includes political campaign staff. Once they took us off the plane and put us on a bus to some obscure hotel halfway between the airport and the city (without access to computers and only one phone call permitted), we never saw an American’t representative again. We had no idea what they were going to do with us—how we would be rescheduled, how long we would be delayed, where we would find the duty free they had confiscated before we left the airport, nothing important, nothing. In addition, their customer relations office was closed and there was no one at the airport. I kept trying to call because I left my old tape cassette recorder on the plane and was in the middle of listening to a book on tape, but could never reach anyone: they were very Lost at Lost and Found. At about 7:00 the hotel posted a notice that informed people that most of us would be picked up at 9am to go back to the airport for a flight at 12:30 However, Burnett and MacNelly (along with about 20 other people) would have to leave at 5, 6 or 7am. We were on the 5am list, but we had no idea why and there was no one to ask. So I waited until I knew David would be back in the US and I asked him what was going on. As you know, David is not an American’t Airline employee. From about 12-4am he tried to find out why and what was going on. He finally discovered that we were double booked on a 7am flight to Zurich then NY and the 12:30 Rome nonstop to NY—which meant if we got to the airport and didn’t want to go to Zurich, we would have to wait in the airport for 7 hours. We decided to cancel Zurich, take the 12:30 to NY, deep six the 5am bus and sleep until 9.

Once on the plane, which was the same equipment and the same snotty crew, we prayed for a timely takeoff. But they couldn’t find the headphones (the plane had been there, been cleaned and serviced—someone stole my tape and recorder—for at least 24 hours) AND SO WE WERE DELAYED FOR ANOTHER HOUR, which in the overall bleak picture was nothing. But it was especially annoying because, being the observant person I am, I saw they couldn’t find the headphones, but the pilot came on to announce that we would be delayed for additional safety concerns. You can imagine how we all felt about this plane and safety.

We were determined not to let this dreadful departure impact in any way on our wonderful trip, and it didn’t. But I can tell you there were many people who did wait seven hours for the flight, there were some who were rescheduled to places they did not want to go and there were a number who were bumped from Business to Coach and they were busily writing to the airline customer service people, canceling their American’t credit cards and looking for alternative airlines for future trips. We are probably among the latter. Bottom line: See Rome the day you arrive in Italy, or skip it altogether. Get up early in (say….) San Casciano.. drive to the airport, turn in the car, leave. Rome has it’s charms, yes, but the level of tension is that of a big city, not a little country village. Go for the Village, and you’ll never go wrong. We’re just sayin...Iris
Posted by Iris&David at 10:00 PM

Sorry to hear about American't.

I flew AA out of Pisa to Miami once with no problem. Couldn't have had a nicer AA crew when flying to Hawaii two years ago.

What is with Rome?

Well you had a lovely time despite the finish. Thanks for sharing.

I am truly surprised Iris didn't tip the bellman on his skull!