There are only a few places where I would like David to scatter my ashes – after I die. Two of them are in Italy. Making the decision about what you want done with your body, when you finally expire—as opposed to everyday, is not an easy task. I told my beloved that I want to be cremated and then have half my ashes divided into little film cannisters (if they are even available in a few years), give each canister to a friend and let them scatter me in a place where they have a fond memory of me. The other half should be divided among family and places I loved. One of those should be Pienza, where they filmed Romeo and Juliet, and another should be San Casciano dei Bagni in Tuscany. I will talk about the latter, later. 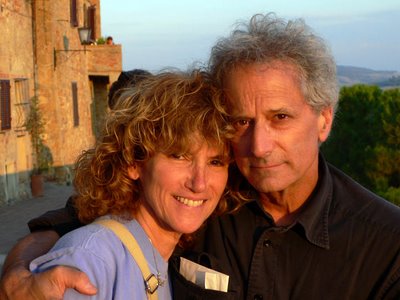 Your humble Authors on the Ramparts of Pienza

We discovered Pienza on our first trip to Italy as a family. We rented a house with six friends. The house was on a farm in San Casciano on the Tuscany-Umbria border. Jordan was eight. Everyday we would awaken at about 9 and look for a new adventure. Sometimes that meant we would drive to a new village to see a simple but majestic Duomo or we would find an outdoor market or a few nice indoor shops. Sometimes we would hop on a train for Rome or Florence. If the weather permitted a few days were spent just searching out the best sunflower field. The rest of the time was used touring a local winery or drinking a latte. If we were driving we would usually have yet another lunch at a roadside café and then head back to the house for a nap and a swim. We discovered Pienza on one of those adventures.

When you walk through the stone gates it’s like going back to the 14th century. You can almost see the Capulets and the Montagues walking about, pontificating about some silly thing-- like why their fifteen year olds had to be pledged in marriage to people other than Romeo or Juliet. Let’s be honest, if they had encouraged the kids to be together they would have hated each other. Has anyone ever had a kid who did what their parents wanted them to do? Of course not, but where’s the romance in a successful teenage marriage?

Anyway, it’s a wondrous place; cool and misty in the morning, sunshiny bright during the day, orange and glowing at sunset, and starlit in the evening. The best part is that it doesn’t feel like it belongs to today. Despite the hundreds of tourists who swoop into town everyday, it still feels like what we think a medieval town should feel like. Despite the crowds it feels quiet, it feels like yesteryear. It is a tiny walled city with narrow streets and not very tall buildings – most of which are now occupied with cheese or chatchka shops. 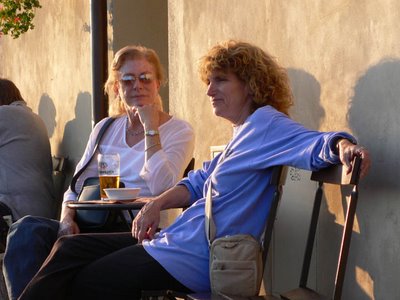 Soozie and Iris at the overlook bar..below: the parking lot
There are a few terrific places to eat, my favorite being the Latte di Luna restaurant. First course was pici (the local fresh pasta) with truffles. 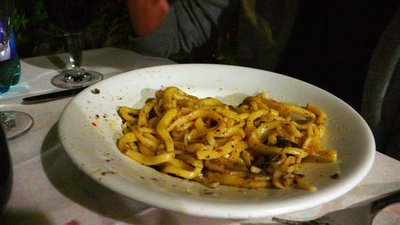 a plate of truffled pici (partially attacked already)
This was followed by a crispy roast pig and completed with panna cotta for dessert. We drank house white, red, and vin santo, but I almost can’t remember in what order because it was the encore to our sun setting wine indulging event. 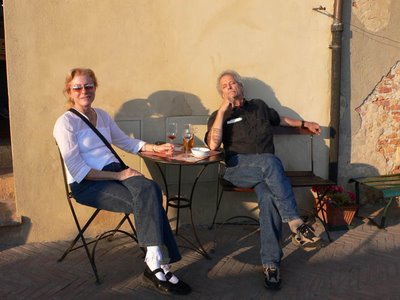 Soozie and D. having a glass at sundown
Which brings me back to the ashes, because I thought that at the end of the via Della Amore, which is on the village ramparts, was where I wanted to be scattered. But it overlooks a parking area and I don’t want to be carried away on a bumper sticker. So we scoped out a new place, and I feel much more relaxed about the plan.

In all the years we had been visiting Pienza we had never stayed overnight so we had missed the silence of the night and the tranquility of the morning. Both were a treat. 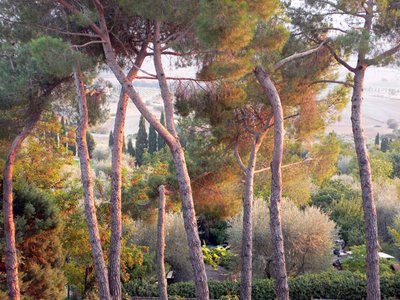 the trees of Pienza at the end of a day
We stayed at Arca di Pienza, a lovely B&B right outside the gates. The proprietors were gracious and treated us like family—but without the yelling. When we were ready to leave the 94 year old tio came outside to supervise the packing of the car and to offer words of wisdom. When Soozie told him he looked wonderful for a man of his age he agreed and thanked God for the blessing of life, family, and tourists. It is a place not to be missed, or for that matter, to be scattered. We’re just sayin...Iris
Posted by Iris&David at 6:57 PM

But what about David?

Does he want his RAW ashes processed into Jpegs or TIFF files?

When my love passed away, I took her ashes to Assisi, up the hill to the Eremo of St. Francis. Now I make occasional trips to visit her final resting spot.

Better to live life now like you are doing...afterwards someone else can tend to the details..