Over the last few weeks I have become especially aware of people speaking in hushed tones. I am not sure why, but when we were in Italy we found ourselves explaining the concept to our English and non-English speaking Italian friends. And although they did not necessarily understand the concept, they loved to repeat the words.

What exactly are hushed tones? It’s not a whisper –that’s a whisper. And it’s not modulated voice. I guess the best way to explain the concept is through illustration. Kind of like when you explain to your kids the difference between using an outdoor or an indoor voice. One of those voices is much more subdued, but not necessarily hushed.

Perhaps the best illustration is what we experienced at a place called Kripalu last week. 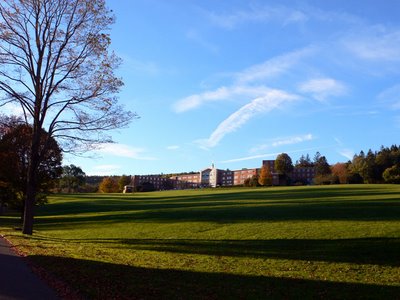 Perhaps the best illustration is what we experienced at a place called Kripalu last week.
Don’t ask what we were doing there -- it doesn’t add to the blob. Some people call Kripalu an Ashram, and in fact it was originally built as a Jesuit monastery, but I prefer to think of it as a place where people try or think they are supposed to speak in hushed tones. I don’t know why. Maybe they think being hushed is an element in being stoic, and that will bring them peace. I’ll get back to this in a minute. 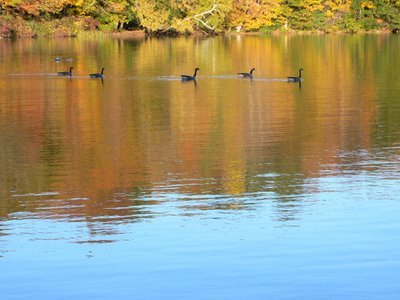 Even the Ducks paddle in Hushed Tones

When Seth was about 5, and we (children are always suffer a good deal of the pain), were going through a difficult divorce, we fled to Woodstock NY where my nursery school friend Pam, lived in a Sufi community. Sufi’s are a sect of the Whirling Dervishes, and no, they are not some whacky group who solicits money in airports. It was a physically beautiful place -- and post the infamous Woodstock concert -- so while quiet, it was not unknown. I was happy to finally get to Woodstock because we had intended to go to the concert but the traffic was so backed up on the Thruway exit, we decided to forgo the event and drive to Madison Wisconsin. Not as historic a trip but great fun. Anyway, in those days, Woodstock was a place where a person could find support from the community of generous loving people and peace through music and dance. Seth learned all the words and motions (yes, there were hand movements) to Rock My Soul. He sang it without stopping until it made me crazy. It luckily became only intermittent when we left three days later. Although Woodstock was a place where infused by people seeking a plethora of spiritual connection, we never spoke in hushed tones. No one thought a normal voice would interfere with the spirit. 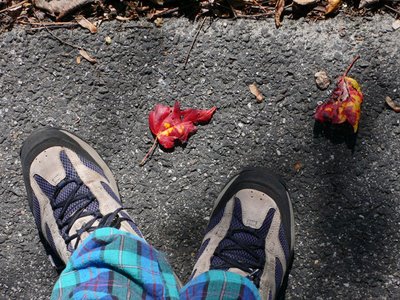 The first and last Fall Leaf


This was not the case at Kripalu. It is supposed to be a place where people become healthy. I simply don’t know how eating boiled or steamed Kale, fried tofu crap, and different shades of beige food stuffs, can make you healthy. Meals were served buffet style so you could eat all you wanted, and some big girls, who were there to learn about controlling their diet, didn’t even bother to use plates, they just piled green and brown upon their trays. And I guess people thought they were getting healthy or becoming at one with their spirits, because they spoke in hushed tones. In fact, in the morning the dining room was silent, so there were no tones, save for the jangle and clanging of silverware on ceramic plates, not unlike what you might hear in a penitentiary dining hall. 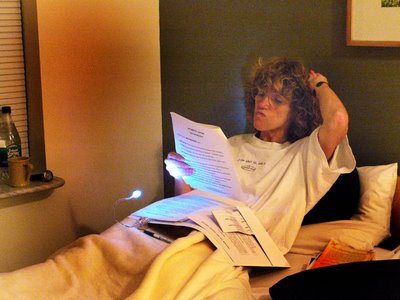 Iris,reading in hushed tones in room 286

We, not being people of the hushed tones persuasion, found alternative locations in which to eat – and I found a hard boiled egg. Just in case you can’t wait to get there, the grounds are spectacular, but our room was sparse. This would not have been a problem except that tons of little Styrofoam balls kept falling from the insulation in the ceiling. When we indicated to the staff that breathing Styrofoam was certainly not healthy -- so could they fix it -- they apologized but alas, there were no repairman working. So we fixed the leaks with masking tape. 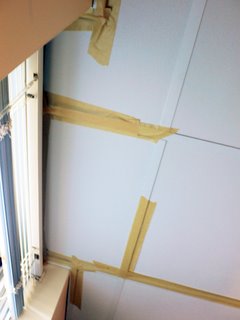 
Today I am waiting for my mother to be released from a same-day surgery. She actually didn’t have surgery just a botox shot in her bladder, I guess it won’t be wrinkled anymore. And surprisingly, people are watching CNN and not speaking in hushed tones. So when do people actually use hushed tones (if you elongated the ‘sh‘ and slide it into the ‘to’, it’s a nice sounding phrase, gentle and soothing)? In ashrams for sure, maybe at church, at a funeral, the breakfast room of a 3rd rate London B&B, hopefully in a movie or show, and in Italy when you’re trying to make a point. I find speaking in hushed tones or repeating the phrase three times slowly, quite calming. If you don’t have a mantra, you should give it a try. Hussssshed Tonnnnnnnes. We’re just sayin... Iris.
Posted by Iris&David at 12:56 PM

This is not just the best blog you wrote, it's the bestest. As I read it I fell into a comfortable haze and had to force myself to stay in the now.
But then the now has past and I can reply.
claysey hushy bye

Hey,nice blog!!! I found a place where you can make an extra $800 or more a month. I do it part time and make a lot more than that. It is definitely worth a visit! You can do it in your spare time and make good cash. Make Extra Cash