The driving always takes longer than you think it’s going to take. We figured it would take us about six hours to get to Verona. It didn’t. In fact, we never got to Verona. We had been driving about four hours when we passed over the border into Italy. It is impossible for me to be in Italy for more than an hour without having something to eat and a glass of wine. 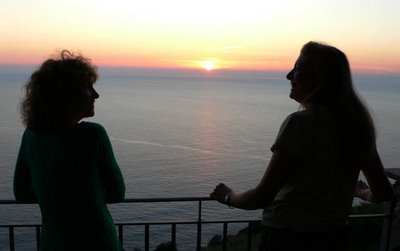 Iris and Soozie at a typical Cinque Terre sunset

I should confess that although I think the wine in both France and Italy are delicious, I’m an Italian wine kind of girl. I’ll explain that after also admitting that an overall generalization covering wines from two fairly large nations does sound a bit superficial—OK stupid. But I am an Italian wine kind of girl because drinking Italian wine, especially in Italy seems a whole lot less complicated. Here’s what I mean. When you tour a small winemaking village in France you hear about all the subtleties of the taste and they charge great sums of money. When you visit a small winemaking village in Italy they tell you the cost is reasonable and you should drink as much as you want.

Our first stop in Italy was for lunch at restaurant in Arma Di Taggia, which is very close to San Remo. The restaurant is owned by friends who had a place in Hudson, New York and decided to relocate to the village where Franco grew up. We arrived a little after lunchtime which was terrific because we had a chance to catch up with Franco and his wife Sharon. (near San Remo, it’s called “ ristorante Giuan – www.giuan.it) Of course we ordered before we talked and had fish, pasta, salad and some of that simple Italian wine about which I spoke. It’s hard to tell you what it was because we always order the local wine which comes in a glass or hardly elegant carafe.

We had gotten a late start out of Provence and David was too tired to drive much further. When David gets behind the wheel in Europe he becomes “macho macho man” and the girls are relegated to being passengers and navigators—I am an excellent navigator and am thinking of it if my writing doesn’t become profitable. We called Verona and although very disappointed, realized any attempt to get there would be futile. With apologies to our generous cousin Joe we decided to look for a place that was closer and we had never been. We decided to look for a place in the Cinque Terre region, five towns where people hike up and down very steep hills. 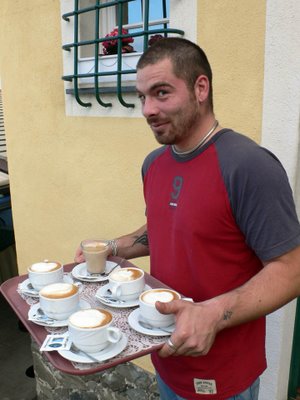 GianLuca with morning coffee at the Giada della Mesca in Levanto..
Very steep. As in, “don’t lose your footing or you’ll slide back to town #1” steep. Hiking was not exactly on our agenda, so we stayed in the sixth town, charming hillside, seaside place called Levanto and took the train from town to town. 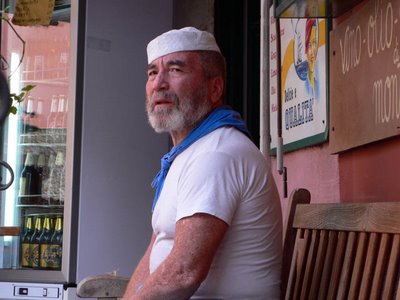 Unadvertised Special: Popeye turned up in the rail station at Monterosso. Looking for Olive, no doubt

And speaking of the train, it was filled with Americans—it’s October for Gods sake, don’t people have to go to work? There we were, chatting blithely about not hiking and to which town we would take the next train, when there appeared two rather hefty women who we will call the Lee sisters (Ugh and Beast, Mot was in another car). They swooped into the car and landed on two seats across from us. There was a man sitting in the third of a four seat arrangement. When he felt them sit down, (he had closed his eyes and was clearly praying they wouldn’t) he shmushed himself against the window and almost disappeared. They hardly noticed his demeanor and turned their attention to us. For whatever reason Ugh Lee felt it was important to share a story about how, when she was somewhere in France, she knew a bathroom was an immediate necessity and she raced into the most elegant restaurant where a waiter, all in white with napkin over arm, rushed her to the immaculate toilette. TMI (too much info) doesn’t begin to describe our reaction. All we could picture was this enormous American screaming about a bathroom and a terrified French waiter hoping she would not run him over. 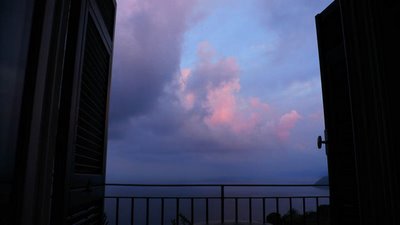 Sunrise thru the terrace doors, Levanto

We visited a few towns and walked a few hills but never over exercised – or broke a sweat. We did run into the Lee’s getting off an elevator which, they informed us, was much preferred to walking up any hills. It reminded me of when Joyce Kravitz and I visited the Great Wall in China. About 12 guys with rickshaws followed us up the thousands of steps, hoping we would relent and let them carry us. It never happened and when they realized they weren’t going to make any money and had wasted their time they screamed about us about being foreign pigs. We were happy we walked. I guess that is why it reminded me of that episode – who can figure what goes on in my addled brain. 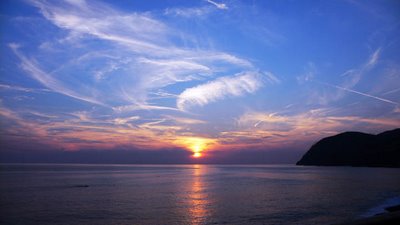 One of those sunsets: did someone say "Three white wines??"

We had great sunsets and a wonderful balcony to see them. Although it was out of town they provided an ‘at your service shuttle back and forth into town. It was the best of both worlds and if we didn’t have a million other places to see we would absolutely go back.
www.lagiadadelmeso.it. We’re just sayin…
Posted by Iris&David at 8:53 AM