Be Still My Heart!

It’s hard to believe that you can feel at home halfway around the world in a totally different culture, but that’s the way we feel about San Casciano dei Bagni. As I mentioned in my last blob (you do have to keep up to feel well informed!), it is the other place where I want my ashes scattered—but here, if you disperse them over the wall, the wind will take them to the hills of Tuscany—so there is no bumper sticker issue.

We found San ‘Cash’ because we were looking for a house in Tuscany and David Fisher had been at a party with a chef who went to Tuscany to cook for some rich people, and they had stayed at ‘Ambra’s house’-- which is the place we rented. The house was great but certainly not elegant or the kind of place you would bring a chef. It was a farm house with a few bedrooms and baths, a vine-covered outdoor dining table, and a pool. And why you would bring a chef to Tuscany, to a town with three sensational restaurants (one in partnership with Joe Allen) remains a mystery to me. But that doesn’t matter. We rented the house and tried to become part of the community. We were unsuccessful until we met Gianna Bologna. 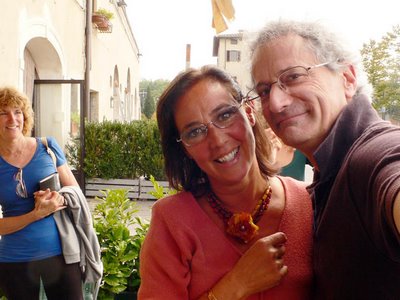 Gianna and DB in San Cash

On paper she is a real estate agent, but in reality her family owns the local castle and she is Italian royalty. She wanted her daughter, Federica, to learn to speak English and we thought it would be great for Jordan to learn some Italian. 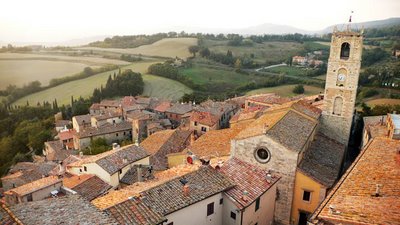 (Jordan spoke English with a perfect Italian accent but we wanted more.) Anyway, we thought it would be great for the kids to bond – which they did, but neither learned one word of the others language. It was astounding to see the physical contortions they went through to communicate, but they managed to make clear what they wanted and we all became friends. Now the girls are 20, and Federica has spent a year 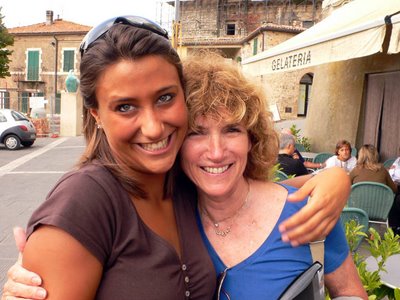 
in San Diego, so it was a wonderful surprize to hear the nearly perfect English pour forth from her. She has her father’s magical smile, and her mother’s illuminated eyes.

The village of San Casciano is perhaps typical of your small Tuscan hill top village in many ways. There are hundreds of years of history in the walls of this town. For the past few years the townsfolk have celebrated some of that history with their own version of the famous Paleo. The Paleo, the twice-a-year horse race which takes place in the main square of Siena every summer, is a tradition which has captivated Italians for centuries. The various “contrado” or neighborhoods each sponsor their own horse and rider, bedeck them in gorgeous brightly colored silks, and race for their lives. (It is said that losing riders, fearing the wrath of their supporters, sometimes just keep riding out of town at the end of the race to avoid being pummeled by disappointed fans.) In San Casciano, whose piazza is perhaps a bit tiny for such a race, they have altered the art-form. Instead of a dozen horses racing up the windy stone road, a half dozen men, dressed in the traditional silks from their ‘contrado’ each push a wheel barrow with a live frog perched on a mound of dirt. The crowds, we are assured, go wild, cheering their favorite frog and runner, hopeful that the frog won’t freak out, and leap OUT of the wheelbarrow, forcing the runner to stop his ascent, grab the reptile, and replace him on his ride. 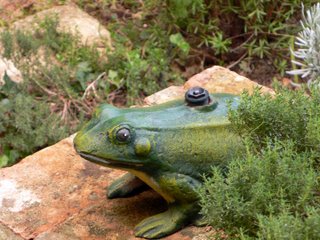 We found a ceramic frog in the Crocetta garden, and while he won’t be riding in the San Cash Paleo anytime soon, his mere presence was an inspiration to us all.

On that same first trip we met Andrea and Christina Leotti. They owned a small B&B and restaurant close to our villa. 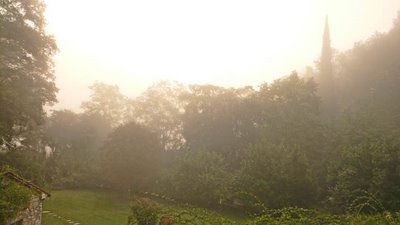 The first time we went Jordan had pici Bolognese (pici is that great Tuscan rough hewn spagetti like pasta) for dinner, and a second plate for dessert. Needless to say, that endeared her to them forever. 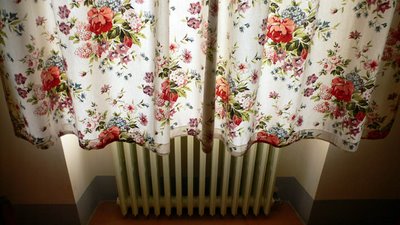 The curtains in Room 8, La Crocetta

Their B&B simply cannot be described as just a B&B. Over the last twelve years we have not only stayed there, Andrea and Christina have crafted cooking classes for us, and they have become a part of our family. 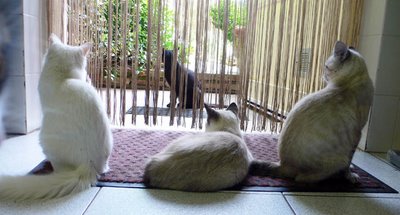 The Palace Guard at the Crocetta kitchen

(Note to cat lovers: You know who you are -- the Crocetta Cats, all eleventeen of them may actually deign to let you pet them. Not assured, but it ‘s possible. Let the record show that on our departure, Celestino – a semi Siamese – leapt into Pablo the van, and had to be coaxed outside by no less than Iris herself. 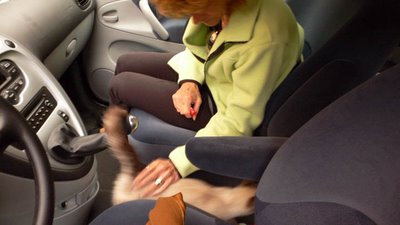 Celestino trying to make his escape to Rome


He would NOT have been happy in Rome.) We adore them. If you want a real Tuscan experience they will teach you how to cook but they will also show you how the olives are pressed for oil, how the grapes are stomped for wine and how cheese was made in the 15th century. 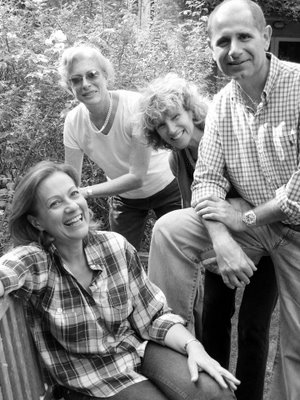 
If you are planning a trip anywhere between Florence and Rome La Crochetta should be on your list for places to stay. [agriturismolacrocetta@virgilio.it ]

Whenever we are in Italy we make it a point to see our friends in San Cash. We were especially fortunate this trip because Gianna, Giorgio (her handsome and charming husband ,) Federica and Francesca (the brillant and gorgeous daughters), were in San Cash. So we got to see all our friends during the three days we were there. Did I mention that they own a castle and a twenty by forty foot thermal bath (the castle being the priority in this sentence)? Well they do and that’s probably part of the reason we were accepted by the community; during our first visit some twelve years ago. If the people in town know that the people who have occupied the castle for a couple of hundred years, think you’re OK, then you’re probably OK. It is amazing what ‘who you know‘ can mean in a rural village—but as I said, Joe Allen is the only other American that has been somewhat welcomed in the community and that’s because of business. I like to think we’re part of the in crowd because of love and respect.

We spent days luxuriating in the beauty of the area with one day spent trying to take pictures in Foiano at the Monday market. Last year, when we went to the market in Foiano (we had been there five years before and found a wonderful bakery) David decided the faces of the old men would make a terrific story. So we convinced Andrea he should come (he’s a great sport and was happily convinced to join us for an adventure) and off we went to do the ultimate portraits of Tuscany story –“The Faces of Foiano”. It was a total bust. None of the faces wanted to be on film. People in small towns don’t trust anyone they don’t know. He did get a couple of nice pictures of a fat cat, but that was about all he shot. It didn’t matter. We bought salt bread (fried) from the bakery, found a few good bargains, and went back to San Cash having learned some valuable lessons about what doesn’t work in a photo shoot. One of those lessons is: always encourage Andrea go directly to the kitchen and do his magic. Our photographic disappointment was leavened by some wonderful cheese crepes which came leaping out of a wonderfully aged black pan. 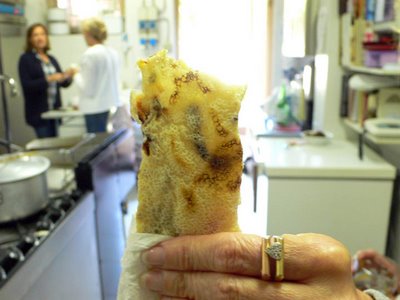 Two of these fixes just about anything


Lets’ get back to the successes. The meals were sensational. Daniela, who owns the Bar Centrale (there is also a “Bar Centrale” in NY on West 46th street as part of the Joe Allen complex) has opened a pizzeria which is terrific. 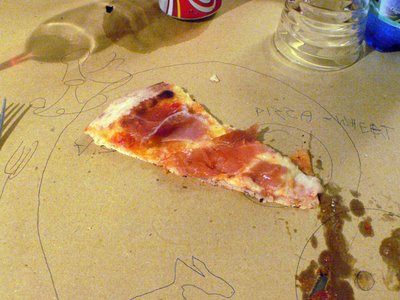 Even without a plate (draw your own) it's delicious
The stylish new hall of ‘za is centered around an amazing wood burning oven, and produces that thin, crunchy, crispy, minimalist pizza which makes you wonder if there isn’t a Billion dollar business in the states trying to make pies like this. Pizza Hut, watch out! Even without a plate, a slice of this pizza is a creation to behold.

La Crochetta remains one of the best unacclaimed kitchens in Italy. The magic that Andrea does with his fried whole sage leaves is sublime. And there is no shortage of good roadside eateries (and a place to buy truffles), in Fabro and Montepulchiano (the Fattore – a huge bbq style place with wonderful hillside views, and chicken squished by a truck. Well not exactly squished, but… pressed, and delicious.) The wine – house variety, without a label - anywhere you go. And that seems to work for us. (Although we still love the Lungaratti wines, which are Umbrian not Tuscan). 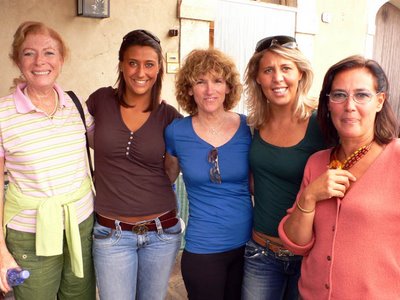 I could go on and on, which in fact I have. But whenever I think about going back to this miraculous place I simply feel, San Casciano di Bagni, be still my heart! We’re just sayin...Iris/David
Posted by Iris&David at 10:43 PM

A holiday trip surrounded by all those beautiful women.

You must have felt like you died, gone to heaven, and had your ashes given to each and everyone of these fine ladies in your pictures.

I think the other Walt said it as best as any could!