Hair Gel as a Weapon 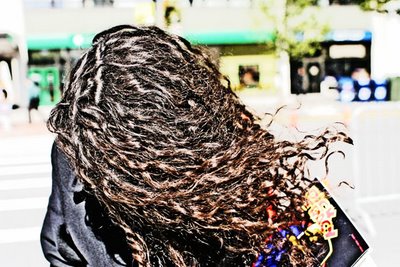 When Jordan called the other night she was on her way to Alabama to see her boyfriend who is performing in a touring company of “Bat Boy, the musical”. He is the Bat Boy. It is a wonderful show about a boy/bat who grows up in a cave but is discovered by some local townsfolk and, as you can imagine, the problems ensue. Anyway, Bat Boy, although it does rank as one of my ten favorite shows of all times, is not what I wanted to blob about.

When she called she had just passed through security at the airport in Boston. “Mom”, she cried, “I am going to Alabama and I am not going to have a good hair day. They took my hair gel. I told the guy that without my gel I would be in serious hair trouble, but he didn’t care. ”

“Well honey” I said, “ Last time I looked Alabama was part of the United States and I know for a fact that they have grits and I believe they will have a drug store or if you get really lucky, a Wal*Mart. You will be able to find hair gel and the security people at airports all over the country will rest easy. They can feel confident that without that hair gel you will not commandeer a plane and take hostages or destroy a national treasure or building with it."

I don’t mean to pick on the airlines, OK, I can’t resist picking on the airlines, but lets get real, should my kid's hair gel really be of concern — unless the security person is having a bad hair day and needs to confiscate some help.

I don’t know about you, but I do not feel any safer on a plane today then I did during the 80’s when Reagan fired all the air traffic controllers and we didn’t know what was going on in the skies. As shown by 9-11, we still don’t know what’s going on in the skies. When Soozie and I flew to Italy I got my passport out and asked the airline person if she didn’t agree that it was a great picture – and I had it taken at Costco. She hardly glanced up when she responded, “Oh I never look at the pictures."

We know that when the airlines determined that our pictures had to match the tickets, it was not for security reasons. People, rather than rescheduling and paying extra, were trading tickets to save money. We all know the airlines couldn’t deal with losing money or rather, not making money. So now they don’t feed us, they charge us extra for seats with more leg room, and they insist we use the bathroom in our own cabin. They talk about all of these changes as security issues, but we not it’s not true, and we know they know it’s just a ploy to make money or keep the people who are paying more money from having to use a toilet that was used by the airplane “trash”. 'Trash' is not a slur, I call people who come off yachts 'water trash' and excellent photographers are 'photo trash' — with me it’s a term of endearment. We also know that they know we often have limited alternatives. The trains are not much better and almost as expensive, and ships don’t go anywhere quickly. Oh well.

There is no romance in travel anymore. It’s hectic, inconvenient, and expensive. I have taken to driving from Washington to NY and Boston. Even with gas prices what they are (and they will be low until after the election), it’s still much more pleasant to leave when I’m ready, to stop where I want, and to listen to a book or sing at the top of my lungs – except when David is with me (proofreaders note: Why is it that she has NEVER sung when I am in the car, with the possible exception of "Need You" by Donny Owens?? Am I THAT bad a listener?). And most importantly I don’t have to think about what I have to “ put through” and what I can “take on” Only my driving is considered a dangerous weapon. I can take my lipstick, hand cream, medications and hair gel wherever I go. There’s a simplicity in this that makes that kind of travel almost romantic. We’re just sayin...Iris
Posted by Iris&David at 11:01 AM