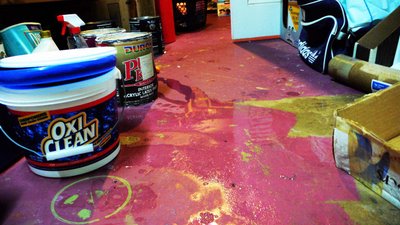 Well, perhaps it's just a bit of What Goes Around, Comes Around. I don't think of myself as any more prone to calamity than the good people of the Gulf Coast. I spent January and part of February photographing from western Louisiana to central Florida, trying to find visual representations of the terrible hurricanes that hit the Gulf last summer. Katrina and Rita, in particular, wreaked havoc across four states, and took with them thousands -- yes thousands -- of houses. A house is a home. A place for people, their stuff, their lives. On the Gulf, there were so many calamitous scenes, that I couldn't keep track of them. As a photographer, it's my job (job? what is a job, the thing that defines us? What we do?) to document not only the upbeat and wonderful things in life, but the terrible, horrible, things which eventually catch up with us. I saw literally thousands of homes lost to the floods, the broken levees, the 160 mph winds. I don't think you can be a photographer, or at least a good one, without having a feeling for humanity, an ability to connect with the folks you meet and photograph along the way. More than once I was moved, sometimes to tears, when I would see a house just completely destroyed by the effects of the storm and the rising water.

Today, I returned from New York to DC, having been away about a week and a half (yes, the last time I left DC, I forgot my wallet!) Well, I had been following the stories of the Mid-Atlantic storms for the past four days (in Virginia, where they might usually get 3" in a month, the rain for the last four days was 12 inches!) We have had a few little water issues over the years. One pesky skylight would just never seem to seal, until it was fixed for the fifth time. Several years ago when I was in Amsterdam, and Jordan and Iris were on a school trip to Honolulu, I got one of those dreaded "Please call soonest" emails from Kat Murphy, a friend who had to deliver the bad news about a leaking hot water heater, which had wetted the floor of our basement. Wetted is one thing. Let's put it this way: wetted means you put your hand there, and it will be wet when you pick it up. But a Mouse cannot SURF on 'wetted'. Today, I arrived home (from a surprizingly On Time Acela train) about 3pm, checked out the formerly troublesome skylights.. dry as a bone. But when I reached the basement stairs, I saw a bunch of stuff piled there which didn't belong. I knew what the issue was. W A T E R. There is no getting around water. It goes where it wants to, not where you want it to. Oh, you can guide it sometimes with a chamois trying to 'lead' it to the floor drain, but it really goes where it likes. Water was frickin EVERYwhere.. not feet of it, not even inches, but wet wet WET, and in some places pooling and puddling enough to make splash if you put your foot down hard. And when you jump up and down and yell, that is considered putting your foot down hard.
Anyway, I got the $10 magic chamois cloth bought at a NY Street fair last summer (the guy picked up a glassful of Pepsi with it.. how could I NOT buy it?) The stuff worked great. But it was like trying to hold back the North sea by putting your thumb in the dike. My neighbor Phil George, whose kids had been prescient enough to go out and buy a WetVac sunday night, loaned me his virtually new VAc,and I have been keeping it busy. Very busy. 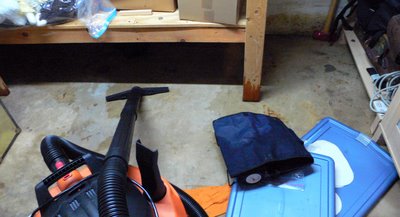 The Famous Wet Vac, at the ready
The strange thing is the water seems to come from no where. It's as if it is just seeping through the concrete floor. You sop it up with the chamois.. its dry for a few minutes, then, back it mysteriously comes. I ended up trying to save all kinds of things, but for the most part its just more of a moving mess (stuff stacked all over the damn place) than destoyed stuff. After the last chapter of Wet down there, I put most of the floor bound boxes either IN a plastic tub, or on a tub TOP (about 1 1/2" high), enough to keep them from the seepage.

I think back to Colleen Bordelons, in St Bernard Parish, outside of New Orleans, as we sat in her upstairs guest room, telling me about how the water from the broken levees rose to the foot of the 2nd floor. The whole main floor of the house covered in water. Tonight, I emptied the 12 gallon tank of the wet vac three times, and my 1 gallon bucket about twenty times. But ten feet of water? I 'm just not competitive in the Horrors category. Herb Gettridge,a very cool 82 year old guy who lives in the lower 9th ward in New Orleans lost everything in his house. Everything. The closet in his bedroom moved me more than I can say: All his suits, fresh in plastic from the dry cleaners; on the top shelf, about 30 wonderful fedoras. This guy was something. And when the water peaked at 11 feet, nothing in his house survived. Herb has vowed to rebuild, no matter what the rest of his neighborhood does. So are the Bordelons. They feel blessed to have what they do have. And in the end, I suppose that is what these terrible chapters are all about. Challenges, and meeting a challenge. I'm finishing this at 2am, and will probably get up at 6 or 630 and fire up that lovely Wet Vac again. Maybe Bill Cosby had it right. He used to do a wonderful bit about Noah. God kept calling Noah (in a deep, hearty, Cosby-ish voice). God instructed Noah to build an Ark, 300 cubits by 80 cubits by 40 cubits. And in the end, Noah didn't even know what a Cubit was! Well I suppose we might eventually figure out what a Cubit is, but at least for the moment we don't have to build the Ark. Well, not THIS week, at least. We're just sayin.

David
Posted by Iris&David at 1:57 AM

Time to build yourself a wooden sea kayak and go with the flow.

Dave, in a past e-mail, you agreed that one could not help but be moved at the situation in N.O.,etc.,especially(as for me)within the Greater St.Rose Bapt. Church shooting the Last Supper on one of the front mud-caked pews. I did not tell anyone this before, but I, too, was that taken emotionally. One thing over the years I have learned: a camera neither makes you invincable, nor does it eliminate your emotions. My view is that once a photographer loses his/her emotions..the camera no longer has purpose. I would like to think MY cameras have purpose. You're a cool dude. Regards, Walter Briggs