Yesterday was a day of déjà vu, or as a person less lucid then ourselves has said, it was déjà vu all over again. But I’ll only blob about one episode and save the other for tomorrow.

We had another transportation adventure. This time it was on the New York subway system. I must admit that I have never been a fan of the 2 or 3 line traveling from Harlem to Brooklyn. Actually, I have never even been on the 2 or 3 — it’s no where near the places I generally go or want to go. But last night we visited with Gorgoni, a long time photographer friend who we had not seen for years. I adore Gorgoni for any number of reasons. Among them he is talented, funny, charming and colorful. But on the top of the “why I adore Gorgoni” list is the fact that on my first Presidential trip, in 1979, Gorgoni took me out to lunch at some lovely Parisian Café. That’s not the reason. While we were eating lunch my radio went off. In 1979 we didn’t have Blackberrys or cell phones. We had these giant gray radios—like walkie talkies, but with White House technology. We heard someone yelling, “Jacobson (that was my name) what is your 7-8?”. (That meant location.) I took out the radio and before I had a chance to answer Gorgoni threw it into a great deal of Paris traffic. There was absolutely no chance for recovery. I sat perfectly still, trying to figure out how I was going to explain the loss of the costly equipment. And Gorgoni simply continued to order lunch and remark that the White House was incredibly rude to try to interrupt our meal. That is the reason.

Gorgoni bought a brownstone in Harlem about 4 years ago, reconstructed it, built an additional apartment to rent, actually lives there and likes it. And no wonder why. It is a fabulous four floors, the bottom two are his. And along with remarkable brickwork, floors and a kitchen, he has a patio in the back. It is located next to a park and there is a church adjacent to his back fence, so it is very peaceful – and safe. When we had finished a superb Gorgoni prepared feast, we walked to the subway. We walked down Lenox Avenue, which much to my white ass surprise, is not frightening even after 10. We waited only minutes for the train. 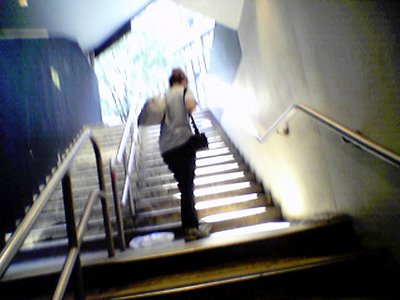 Iris emerging from the Underground
We were the only white people in our car. I was not surprised or afraid but I was a little pissed off because all the other people in the car seemed to have some kind of secret. One guy got on with a large oil painting and showed it around. It was unclear whether he was selling it or showing it off. But the other people knew. There was another guy sitting in the corner who thought everything that happened was hysterical and he laughed the entire time we rode. The other people seemed to understand. Then a handsome and incredibly fit young man cued his girlfriend and he started to move to some rap music. It was not a dance. He moved his hands and his body without really moving. Then he suddenly started to do flips over the bars and hung like a stripper on a number of poles. There was polite applause. This seemed to stir something in the man with the painting and he started to talk to himself about what was happening with the entertainment. This sent the man who couldn’t stop laughing into fits of knee slapping response. The woman with the 4 inch finger nails sitting between them seemed amused and she seemed to get the joke. The woman next to them continued to sleep. I, like a few others still reeling from the performance, gave him a dollar. Then when my beloved and protector (they are both David) realized we needed to get home and the 2 wouldn’t take us there, we changed to the E — our usual coach, and it was quite an ordinary rest of the trip. I love déjà vu all over again. We’re just sayin…
Iris
Posted by Iris&David at 12:32 AM

Harlem has change since 1896 when my grandfather was born there.

Don't know if it was any safer with all those Irish around.

But the dancing was far different. Still don't know how the Irish dance without moving their arms?

Dave, can I have a buck too?

Your are Nice. And so is your site! Maybe you need some more pictures. Will return in the near future.
»