Starting yesterday and continuing into this afternoon we had an adventure (this is our first joint blob). Today, we got on the 2:30 bus from Boonton NJ to New York, NY. We expected the bus would be empty—which it usually is, and we expected to go the usual route – straight on 46 to 3 and into the Lincoln Tunnel. The bus was anything but empty, and the first thing that we realized was that the majority of people had little or no teeth. Now whatever you want to say about NJ, people do have teeth—at least my friends do. We thought, for just a minute that maybe we had gotten on a bus which was taking some lunatics on an outing. But even without teeth, the people seemed pretty lucid so maybe it’s a new style. Then as we were traveling along at a nice pace the bus driver took a detour. We left route 46 East and drove into a Home Depot. But we didn’t stop to shop. No, we proceeded through the parking lot and wound our way back on to 46 West. Then we veered off to 23 made another turn and drove into the Willowbrook Shopping Mall parking lot. There were then shouts of “OK lady, this is your stop.”

What we discovered was that a woman had forgotten to get off the bus on the trip from NY and had to make the whole trip back toward NY until the bus, once again passed the Mall. Needless to say the people we originally identified as lunatics were not happy and they started acting like lunatics. But the bus diver calmed everyone down and we proceeded without incident. He was a regular Ralph Cramden, the kind of guy you want driving your bus. He had those several important traits that you look for: 1- he was awake. Not much to ask for these days, but given how you see the accident rate of buses climbing, just having a driver with eyes open and on the road is a plus. 2 – he looked after the “little folks”. The woman (and her two very embarrassed 12-ish year old kids) were pretty clueless, and this guy took them under his wing to be sure they were delivered to the right place. While it was a bit disappointing that we didn’t’ get to shop at Home Depot on the detour, it’s nice to know our driver knew the way. Of course many of the folks, even the partially toothen ones, were busy giving him “Helpful” directions about how to negotiate the double U-turn on a road famous for making you go straight, and only straight.

It’s June 18th fathers Day. The adventure really started yesterday when we left DC. Immediately after leaving the house I had David stop so I could check to make sure I had my Palm and my ipod—I’m electronically very today. He gave me a little crap about it but I checked and I did have everything. After we drove through the Baltimore tunnel and were past 695 (about 60 miles out of Washington) he started to search around. This is difficult to do when you’re driving so I asked him what he was looking for. “Have you seen my wallet?” he said. “Where would it be? I asked. “Maybe in he back seat” he said. I looked and it wasn’t there.

We pulled over on the side of 95 and he looked through all his things in the trunk. It wasn’t there. So we called out wonderful neighbor Marti George, who has saved us fro many disasters, and she dutifully used the emergency key, went into the house, wandered, guided by David’s personal sense of dread, into the studio …”Oh, yes, it’s here on the step stool.” A step stool is not a jeans pocket. So, in the manner of the Marx Brothers imitating the famous Russian Aviators… (“… so we fly almost all the way across the ocean, and whaddya think happens.. we run outta gas, and we gotta go back to France…” Chico Marx : “A Night at the Opera”) whaddya think, we turned the car around on 95, and headed back to the house, 70 something miles back. Got to the house; got the wallet; got back in the car. And whaddya think? We drove it again, and THIS TIME we make it all the way to New York. They forgot to have a ceremony for us at City Hall like they did for the Russian Aviators, but just making it through the tunnel into the city was like having the Key to the City, itself. 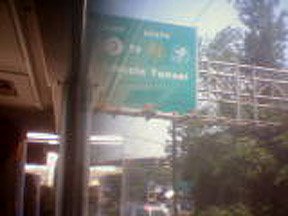 The Lincoln Tunnel road sign, as seen from the Boonton 230

Adding 3 ½ hours to a 4 hour trip is not, trust us, the best way to start a frolic-filled weekend. But by the time we got to the Lincoln Tunnel, we were speaking again. Which brings us back to today. I hate Father’s Day, not just because I don’t have a father, I’m an equal opportunity hater. I hate Mother’s day as well. I guess it’s because it’s one of those “greeting cards day”. A kind of superimposed holiday. And all I can think about is that when we were kids my grandfather used to say, “everyday is father’s day. I don’t need to have one day a year when I can have 365.” So mom was in good form, and despite the detour, the bus made it back to the city in record time, and as a bonus the subway was not delayed and the air-conditioning worked, . All’s well, that ends well. We’re just sayin…