Sorry for the delay in blobbing but we were away, and I ate myself into a coma and alas, that’s where I’ve been for three days. We went to Boston to a wedding. Under ordinary circumstances we would have made our excuses and stayed home. But Samantha, is the daughter of one of my dearest friends so making excuses was out of the question.

It was a lovely service. I don’t know what they’re calling it today but it was duo-denominational, bi-religious, Catholic-Jewish, a priest and a rabbi; in a Catholic church. You get the picture. When Seth got married there was also a priest and a rabbi but the service was in a lovely old chapel. While they thought that was a little less religious, we thought that if you were going to go through all the trouble of having a religious ceremony then you should really do all the traditional stuff. So they printed up an explanation about all the things that happened in the service and everyone was delighted. The best part for me, was that the priest turned out to be a guy who hung out with us in college. He had wanted to be an entertainer and so he entertained us — and then God, I guess. Anyway, Sam’s wedding was absolutely lovely and when the Priest finally stopped apologizing for having the ceremony in a church and told the Jews how welcomed they were, it was fine.

Flash back to our arrival at the hotel before the wedding. We decided it would make sense to take advantage of the offer made to take people, who didn’t want to drive, on a bus. It turned out it was us and the family that came from Ireland to be a part of the celebration. And need I say, they were fabulous people. All the women were named Mary or Margaret so there was no chance to screw up an identification. Not that they would have cared. They were too wonderful to care about a mix up in names. So there we were with our Ritz Hotel umbrellas waiting for the bus. They recounted the evening before when the bus driver got lost and never got to the rehearsal or a rehearsal dinner. We were all a bit nervous about the arrival but we were hopeful. (Yes, the reception was at the Ritz and that’s where they all stayed. It was not something they had done before but I don’t think there’s a Ritz in Dublin — I could be wrong.)

While we were waiting for the bus the bride came out of the hotel. David had never met Samantha so when I suggested he take some pictures, he told me to mind my own business but in fact, chased her down the street to take some candids. As soon as he was out of sight I turned around and much to my surprise, there was Samantha. I hadn’t actually seen the other bride's face before I instructed David to follow her, but I couldn’t imagine there were two brides at the Ritz — there were. So there was David chasing the other bride down the street and there I was yelling "David, David, it’s the wrong bride, here’s Samantha." By the time he realized he was at the wrong wedding Samantha and her entourage were in their limo and on the way to the right wedding. Well it did provide a certain amount of entertainment for the Irish family, the people on the street and the bride who wondered why some stranger was chasing her into the church. 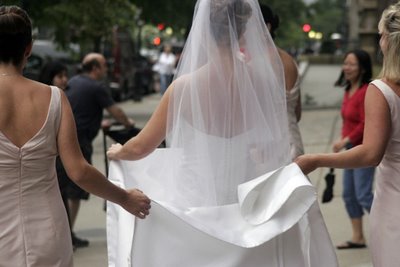 Et, Voila! The Wrong Bride!
After the right wedding we took the bus back to the Ritz and started the celebration. The food was not only delicious it was non-stop. The band was terrific and although they were told not to play a hora, it was still not disappointing. We danced until after midnight and then I picked the flowers from the table arrangements (they were three feet high made up of orchids, cabbage roses, tropical flowers I couldn’t identify and incredibly lush greens.) There were little lanterns hanging on the branches as well as elegant twigs. I know that sounds like an oxymoron but it’s true. There were also four small arrangements of different colored cabbage roses surrounding the center arrangement. I did have a wee battle with the wedding planner who didn’t want me to pick the flowers but I pretended I spoke no English—it works every time. We’re recovering from all the festivities and we're sending the all the pictures to Samantha because we have no idea about who the other bride might have been. Shooting the wrong wedding can be pretty colorful. We’re just sayin… Iris
Posted by Iris&David at 9:52 PM

On Donna's and my honeymoon, we traveled to the Tetons and Yellowstone National Park. It was October.

In an empty parking lot lightly covered in snow, the rental car made the first morning tracks so we could get a close up look at the beautiful Teton Mountains.

As I snapped, Donna noticed a camera covered in snow on one of those concrete things used in parking lots to stop cars. Some one left it there the night before 'cause there was no snow the day before.

Donna dusted it off and pressed the shutter. It worked. Seeing no park official around to give the camera to, Donna put it in the car.

Later in Yellowstone, she examined the camera and realized it was better than her's, and it had plenty of film. So she started using it for the rest of the honeymoon.

Weeks later, back at home, her film come back from the Seattle Camera Works, or whatever they're called. She never let me take her film to my labs 'cause she said they were too expensive.

As we flipped through the pictures remembering all the great sites Donna stopped on one photo, scrunched up her face and said "Whose that?"

Showing me the picture, and a few just like it, I said "Those are the people who own the camera you found. These are their vacation pictures."

We then began to laugh. Donna completely forgot about finding the camera.

We still have the pictures of the wrong vacation.

Way to go David, perhaps a career as a wedding photographer should be skipped.