All Things in Their Place(s), esp. the TURKEY

You never really know how things will turn out. I had a brief moment Tuesday night or rather several of them. We call them Dread, usually. Water was coming from some quasi natural spring UNDER the Arlington House.. thru the cement, and pooling on the floor, then to begin its slow beguiling trip (the floor LOOKS level, but thank god they made it about 1/2 degree slanted towards the North.. towards the Drain...) across the room to the drain, where it enters the drain, and goes back to where it came from. It didn't come thru the sides of the house. Just magically appeared. Maybe it was part of the Promotion for the new Damian, OMEN film. You know -- possessed child stays in the upstairs room, thinking horrible thoughts about his 4th grade teacher, and piano instructor (they have to keep grabbing their throats in agony.) It would be a pretty good Damian OMEN kind of moment. Rain comes down in Noah like numbers. House protects family from elements. Damian gets pissed at piano teacher. Water appears on floor of piano teachers basement. Piano teacher's carpet gets sopping wet, threatening the upright piano in basement. Well you could build a scenario that would be worthy of John Waters (waters, get it?) But the scenario I saw, Tuesday night, bundling all kinds of wetted down stuff was... "I'll never be able to leave this house again.... I'll have to cancel my trip to the Arles Photo festival next week, I'll never even get to the First floor again.. I'll just be in the Basement for my 60th birthday. No, it's ok. Just send down some water soluble cream cheese frosting. It's ok. I'll have a good time. The dry rot on my feet is just about cleared up. Send me some Lamisil for my birthday. No, really, it'll be ok.

I remember having a breakdown like this in the summer of 1984. We had just gotten married, were living at Iris' brownstone on Q street, a fabulous hunk of real estate - the one we left for the burbs after WE got pregnant (hey, I was pregnant, too, just not with Jordan!) It rained like hell at the end of May: Iris was on the Gary Hart campaign, doing surrogate scheduling and getting major players lost in cities they didn't know they had to be in. I was planning on leaving for Paris to shoot pictures for the 40th anniversary of D-Day. Then it rained. And, like a Matisse painting, the color, the driplets, just made their way thru the brick walls of Q street, and streaked down the sides of the living room towards the couch. It never stops, I realize that in my new life, I'll never be able to travel again. Ill be stuck on Q street for the next forty years, with a mop, a sponge, and a four step ladder.

Well I survived Q streets floods.
And I guess I survived Upton Streets Damian Omen m(Omen)T Noah was right. Just get things in order, and things will take care of themselves. So, I got the house fixed. Called a cab, raced thru the summer traffic to Union station.. hauled ass, and i mean HAULED... as in.. OUt of the Cab at 658 (Im not making this up), the platform at 659, and was yelled at by the Conductor as I hopped on at 700p, flat...fortunately I had packed two Fuji film cassettes (they seal nicely) with Wild Turkey, the whiskey preferred by Warren Burger (I once saw his limo parked... brief case, Wild Turkey... what more do you need as the Chief?) and they tasted so damhn good: it was the best thing you could do to a bottle of Perrier, especially after cleaning a basement, running to a train (as if in a 1940s Ray Milland movie), and getting your little self into a Seat! Sometimes, just getting things NOT to be a disaster is a great accomplishment. 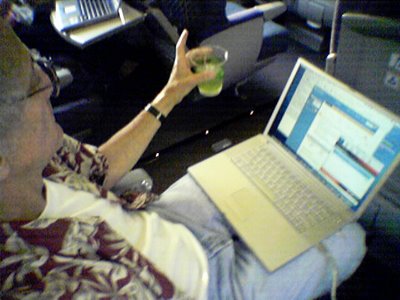 It doesn't get any better than this: Perrier & Wild Turkey, Powerbook with a Verizon card, and 95 mph to Gotham City.

Getting to VA, fixing the Wet, heading back to Gotham city... sitting here on the train. Things could be a lot worse. We're Just Sayin.

David
Posted by Iris&David at 8:09 PM

Take up carpet in basement so all future Perrier flows downhill faster instead of me.

When finding myself with head barely above water, try Wild Turkey straight up to displace the demons in the basement.

What I want to know is why you are drinking antifreeze on the train?

A little off topic, Guys... I have a question. Last weekend I played at this site:
[url=http://www.rivalspot.com]Rivalspot.com - Playstation tournaments[/url]
They say you can play online sports game tournaments on any console for cash... had anyone tried that before? Looks like a cool idea...
Are there any other sites where you can play sports games for real moneys? I Googled and found only Bringit.com and Worldgaming.com but it looks these guys don't specialize in sport gamez. Any suggestions?