When I was born my parents lived in a large one family house that was big enough for two families.  From the day I was born, until I was six years old, my cousin Stevie, two weeks my senior, and I lived in the same space, like we were twins. Our parents (my mom and her sister,and their husbands) were careful not to deny either of us, so we always had two birthday parties, two weeks apart.  And in fact, we never thought we were having two separate parties, we just thought is was one continuous celebration. 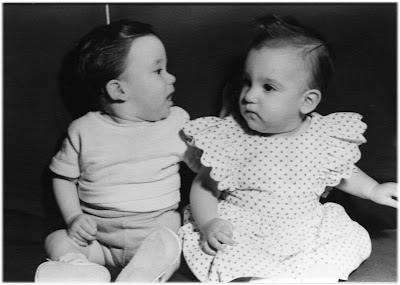 And that’s the way our lives were.  We were inseparable. He was Kaufman and I was Groman, and when anything was alphabetical we inevitably sat together. He was always in trouble and I was goodie two-shoes, so it evened us out.  We were the StevieIris character.  No one thought of us as individuals until we were six.  At that point our parents  decided to build their own homes.  My mother was pregnant and Stevie’s sister was three. Without thinking about what we might suffer in terms of tearing us apart, we all moved to different spaces.

It was a traumatic time for the StevieIris character.  We did not understand why we no longer lived together.  We thought we would always be together. It never occurred to us that we had different parents. We just assumed everyone had four parents.  It just wasn’t an issue with which we ever thought we had to deal.

But, our parents were totally clueless.  Since they never said goodbye, they assumed we realized that we would all be connected forever. And we were, but not because they explained it to us. Because you cannot separate twins…regardless of distance.  Which brings me to my blob point.  The StevieIris character, although distant for so many years – he was sent away to school when we were in high school – always existed. It couldn’t be dismissed or irrelevant.   It’s who we would always be, despite the years of  being strangers.

I am about to celebrate the birthday he celebrated two weeks ago. I had a wonderful evening with other cousins. He wasn’t there, with me, at dinner.  But it doesn’t matter. Whatever happens in our lives, there is no way to break our years and years of connection.  It gives me great pleasure to keep those memories alive.  We have secrets no one else can share. And we don’t even remember what they are nor the why nor wherefore. Again, you cannot share a Winky Dink* screen and ever operate as a singular personality. 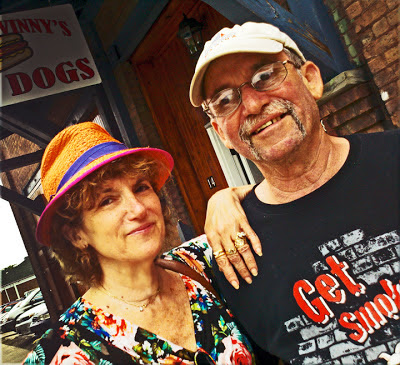 It’s almost my birthday and all I can think about is….."I wish we could still ride Whitey."    We’re just sayin’… Iris 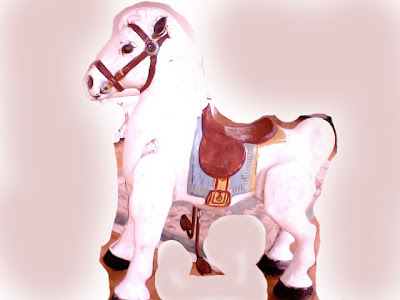 Finally found some of you from the wonderful Gefilte Fish family---*phew*! Since the website on the DVD has screwed up and defunct (I guess), I tried to fine someone/anyone from the Dubroff family. Thanks for the recipe for coffee cake! Hope the recipe book is still available somewhere. What year did Peppy pass away, the last of the siblings? Does the family still get together for Seder? I'm assuming the house is not in the family anymore, I hope I assume wrong. Sorry for the questions, but I love this DVD so much---my whole family does! I hope to hear from you, DavidIris. Love and God's blessings, Joan Korber, Dayton, OH (beetiesmom@hotmail.com)

Iris,
Do you REALLY think you were a goody two shoes? You ruled the neighborhood!
Happy birthday!
I apologize for using your blog as email and trust you will not post it:
There is a picture on a SAT poster that has an uncanny resemblance to you in HS... I took a picture on my iPhone but haven't a clue how to send it to you.
Cannot recall how I got in touch before. (There's a LOT I do not recall these days.)
Maybe it is on the SAT site but if you'd like my picture, show me the way...
Mary Lou Molteni Kufta. Memamlk@gmail.com
PS: I was in love with Whitey ...