It was years before my son finally confessed that he did love our house and the life he had when we lived at Dupont Circle in Washington, D.C.  Yesterday, when he found out we were staying in the old neighborhood, he asked me to take a walk down his memory lane by taking pictures of some of his favorite spots. 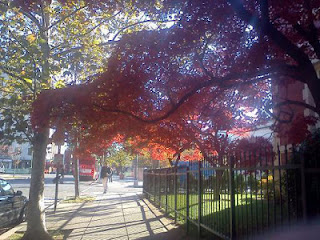 the view of 17th street, with some autumnal touches still present

Of course, my memories were mixed with his, but with a mother’s eye, instead of a child’s.  His favorite response to most of our adventures --like the first time he saw a bank ATM cash machine, and when it was raining so hard I hit a guy running across the street – was “holy shit ma!”  The exclamation, when the cash came out of the machine, was finished with “We’re rich Ma!”  And when I ran over the pedestrian, it was, “I think you killed that guy Ma, let’s run for it.”  We didn’t run for it and he wasn’t dead.  In fact the only thing about which he was upset, was that the clothes he was wearing to work, were beyond wet. 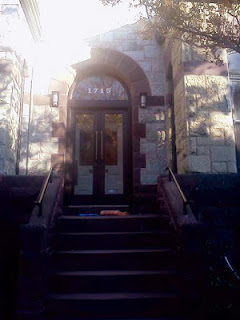 front steps at 1715, where many a refreshing beverage and accompanying conversation were served

We are staying on N Street, right around the corner from the infamous 1979-85  “1715 Q Street Salon.”  Almost every weekend included at least one or two events – and they weren’t necessarily planned.  One weekend Doug Coulter had a party but for some reason, no one ate any of the fabulous food he had prepared.  So we called out the troops, picked up the food, and had another Coulter party, but it was moved to 1715 Q.  Or, for some worthy cause,  we would auction off the place and our incredible advance and serving expertise to host some gala event. 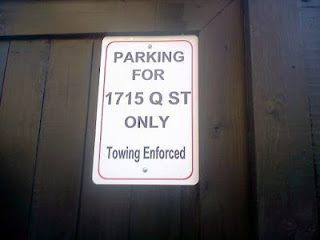 if we'd only known how much those parking  spots would fetch, we'd have kept them

When Seth came to stay, holidays and summers, it was especially wonderful because there were so few friends with children, his presence was always welcomed and special.  He spent lots of time at the White house. Whether it was for the Easter Egg Roll, July 4th fireworks, or the Christmas tree lighting and parties, the Carter’s were always generous with those of us who had families. This generosity expanded to entertainment at the Kennedy Center, tours at other government buildings,  and special events where organizations wanted a White House presence. 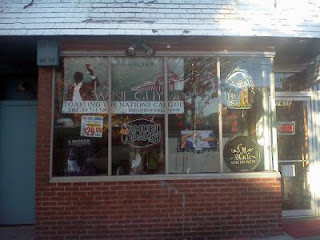 now its all fancy imported wines, but in the 80s it there was a LOT of Thunderbird

But for Seth, the most fun was walking out the back door and down the alley to the McDonalds.  He always wanted to go by himself, so I would watch at the door, and the guys who hung out at the liquor store would walk him back and forth across the street.  I was always concerned about him walking anywhere because I was never sure if he knew enough to look both ways when he crossed the street.  But the one time I was late at the camp bus stop, he walked all the way home by himself.  He was so proud. I was totally traumatized and stupidly, instead of praising him I screamed about how he disobeyed my instructions.  Luckily, David intervened and eventually I realized how stupid I was, but first children always bear the brunt of their parents’ paranoia. 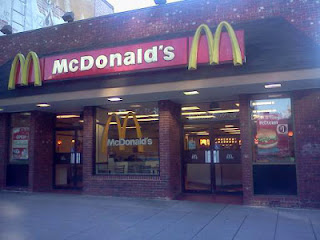 even then, we were "Lovin It"

The Carter days were way different than what the tone of the Congress and White House are today.  We were all friends, not only with people in the Administration, but with the Press, the Security people and yes, even Republican elected officials.  Loyalty was expected, not a nice surprise.  Public Service was a respected profession. And we had fun, whether it was at work or play –frequently they overlapped.

There are too many stories to tell and too much life to remember, but we loved that house and those years.  It has taken me 25 years and a request from Seth to revisit those memorable places.  But it was well worth it.  As I passed the little Safeway grocery where we shopped, I can so remember when the cashier would inform me that my husband was home.  “How do you know?” I would say.  And with a big smile she would say, “He’s the only man in the neighborhood who comes here in a purple skirt.” Those were the days when he wore a sarong and the neighborhood was remarkably straight.  It remains a place I’d love to live again, and 27 years after leaving, it’s a very welcome feeling to come back again for a few days.   We’re just sayin’…  Iris Burnett
Posted by Iris&David at 9:29 PM

It was wonderful to revisit 1715 Que Street. Remember Davie's jerk chicken? My 40th birthday? Bibi Natinyahu and Lynn Cheney (not at the same time); the Coca Cola "ladies" looks of disbelief when they visited before the Gandhi premiere? The seders wiht funny hats?