New York is an especially weird place during the Christmas holidays.  You noticed I said, especially.  There was a protest in Times Square today.  It wasn’t the usual run of the mill protest,  with chanting and marching.  Oh no,  this time hundreds of Albanians gathered on the red stairs in Greeley Square. Those steps are at the heart of Broadway, Aside from all the “On Broadway” theaters, right underneath the steps are the TKTS booths.  That’s where they sell half price tickets for shows on and off Broadway.  My hope is that this is not the start of a new way to corral media attention.   It’s not that I don’t love a good protest, or a good march, (although I do not like being in the middle of a crowd), it’s fun to stand on the sidelines and just watch.  But protests should send a message – and a big part of the message is the place where the protest takes place.  A human rights demonstration at the Lincoln Memorial, an Arab protest outside an Israeli Embassy, Earth Day in a park.  Now these make sense.  And I could be wrong, but I don’t remember Albanians being denied tickets to “Wicked” or even “Annie”.  So what is that about.  Maybe they chose the steps for their color.  The Albanian flag is mostly red, with a little black.  It’s just part of the “weird” in the city.

It’s a time when tourists, most of whom don’t speak more than a few words of English, and who are negotiating the largest subway system in the world –which is not easy, even if you speak perfect English, can be found at Rockefeller Center waiting for the annual Christmas tree lighting.  They begin to line up at about 2:00pm.  The lighting ceremony begins at 7pm.  From about 4pm the police start to shut down the streets.  It is unlikely that there would be any terrorist attacks at the Christmas tree lighting, because it is so crowded that you cannot move your hands away from your body.  In addition, if you line up within “range,” you would have to be on site by 1pm.  By the time there was a crowd, any terrorist, male, female, big or small, would have to go to the bathroom. And if you leave you can’t get back in.  From my perspective, being confined like a rat in a trap, would be the last way I would want to spend a pleasant evening – especially if it was going to be my last evening on earth. (catch up, I’m making a joke about suicide, which under the best of circumstances isn’t easy.)

After I hurried out of the Albanian protest, and out of the mess in Rockefeller Center, I proceeded cross town. I thought the East side would be less chaotic than the West side – but we have Bloomingdales and the newest attraction, “Sprinkles”, a trendy cupcake bakery.  Cupcakes have become the rage in NY and LA and probably a great many big cities.  It happens that my favorite bakery is “Crumbs.”  Not only are their cupcakes delicious and unusual, their pastries (oye, the almond croissant) are worth the calories—which have to be listed by law in NY. Talk about, in your face.  Anyway my most reliable food source, (my cousin Debbie), told me I needed to go to “Sprinkles.”  The cupcakes are also delicious.  However, remember the weirdness I mentioned earlier.  In most bakeries you wait in line and the server takes your order, packs your order, and turns you over to the cashier.  And on to the next customer.  Not at “Sprinkles”.  One person takes your order, one person packs your order and another person takes your money.  You might think this would move things along. It doesn’t. If you want to change your order, add to it or subtract, and the person who took your order is waiting on the next customer, the staff get confused. And it’s New York, so of course you want to change your order half way through the process.. Or, if you are cashing out, but you ask a question about the itty bitty cupcakes for your dog, the cashier gets confused about what to do, answer or make change.  Anyway, there is inevitably going to be a longer line than necessary.  But here was the weirdest part, the salted caramel cupcakes, that Debbie suggested, were divine.  In fact, almost every other  customer bought one.  The woman behind me, who was originally in front of me, but she had questions, asked if any of the cupcakes were being discontinued.  “Yes”, said the server also acting or not acting like the trouble shooter, answered.  “The salted caramel are being discontinued.”  The customer was shocked.  “Isn’t that your biggest seller?”, she said.  “Oh yes, but we said we were going to discontinue them before the holidays and we kept extending their little lives.  So now we have no choice but to stop making them.” 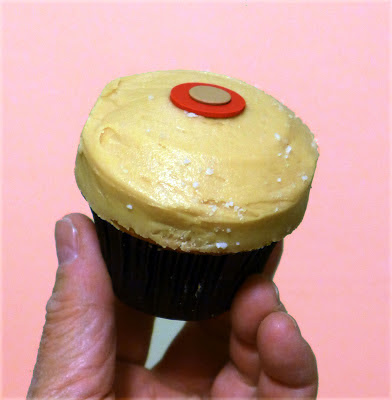 Recently added to the Endangered Species list, this SPRINKLES Salted Carmel Cupcake
Maybe it’s me, but if my customers loved something, I’d probably rethink getting rid of it.  And that’s what I mean.  Protests on the red steps, people waiting in the cold to see a tree lighting they could certainly be more comfortable watching on TV, (all the entertainment is prerecorded), and taking the life of a cupcake when it has proven it’s value to the business.  It’s just weird.  We’re just sayin’… Iris
Posted by Iris&David at 9:23 PM

cupcakes have been the THING in DC for years now. ever since DC Cupcakes started showing on TV there is ALWAYS a line of tourists waiting outside of georgetown cupcakes in georgetown. I know that there is almost never a line at the Bethesda location.