What About Next Time?


Yesterday we saw “War Horse” at Lincoln Center. It may have been the most exciting theater experience I have ever had. You simply didn’t know how anything would turn out. You merely hoped for the best – which is what we are living with the Congress and the Administration. 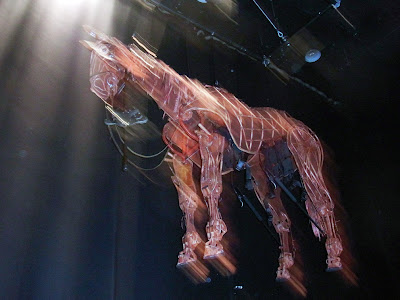 Joey....
Is there anyone left in America who thinks BO is doing a great job as President? Is there anyone left who has a nice thing to say about his ability to lead? (Other than the six people he actually talks to). Is there anyone left who is not tired of Axelrod’s apologies and Geithner’s “deer in the headlights” performances. All the first time voters, and young people who thought that BO was their future -- what will they do? What will any of us do? Is the next election going to be one where we vote against, rather than for someone.

It’s not easy to govern a big country. But it’s impossible to govern when you the Administration and most of the political people, who work within its confines, have never transitioned out of the campaign mode. There is an enormous difference between running a campaign and running a government. Presidents usually learn that the first year. But when the President thinks that the way to succeed is to compromise values and the promises made for which he was elected, you have to know something is wrong. Where is all that hope!?

Here’s all you have to know about this Administration. One very senior level appointee told a friend of mine in the media that if he didn’t do what the appointee wanted, “there would be blood.” What kind of professional people (who are over 8 years old) talk that way? The breathtaking arrogance, partnered with an unwillingness to admit that you need help for things to get better, is stupid… just damn stupid.

BO is not to blame for everything. While the eight years of George Bush probably are. However, this President was elected to make jobs, not war, improve the economy, and make “change we can be proud of”. Oops. The war in Iraq may be a Bush war, but Afghanistan is not. Let’s try to put it in the simplest terms. (And I mean no disrespect)., I count some men, as well as Military leaders as good friends. But I think all the big guns said to BO, “We have a really big penis, and we think that if you don’t go along with all our recommendations, the rest of the world will think yours is itty bitty.” Sorry to be a bit crude, and reduce the problem to a body part, but there seems no other explanation except inexperienced people coupled with exceedingly bad advice.

Where is all the goodwill. Hooray! We killed Bin Laden! Hooray, we passed health care reform -- somewhat. Hooray! we raised the debt limit – wasn’t that supposed to save the world as we know it? Hooray! We sold women down the river, but they are, after all, just girls. And Hooray! Gays can serve in the military – it’s about time. Oops, no they can’t. But we are a nation in a fog. The President may know where he’s going but not how to get there. The Congress is clueless -- except they will all have money, healthcare and a Hill parking pass forever. What are we going to do when we we’re so unsure about a next time. We’re just sayin’…. Iris