Jobs But Not Forgotten

He’s not dead yet, though in the minds of most of us, yesterdays’ terse announcment that Steve Jobs had resigned from APPLE as CEO perhaps made us think we’d lost the preeminent industrial designer of our time. Jobs laid it out in a short note, that “when” that time would come, he’d know it, and he would stand back and let the others take over. I never worked at APPLE, and besides a handful of recent promotional pieces I had only ever worked on the company photo book “So Far,” published in 1987, on the tenth anniversary of the founding of the company. For years, in the 80s the payoff for working on a “Day in the Life” photo book was to get a new Mac. Yet, like most folks who followed (and purchased) the growth of APPLE all these years, I felt a small but weirdly sincere connection with the guy whose product design seem to create goodies which, like a flower girl spreading petals in front of a bride, led us into this wacky 21st century world of electronics-running-our-lives and us thinking we run them. In the space of five years we have become a society where instead of accosting strangers on elevators or buses, the old fashioned way of interacting, we simply pull out out an iPhone, and pretend to be getting really important messages that will alter our lives for the better. Of course almost none of those important messages will really make anyones lives better, though we’re perhaps all richer for being able to call from the produce section at SAFEWAY and ask if we need bok choy, or do we have enough. Much of the stuff that APPLE makes falls into the category of ‘created demand.’ We all liked the idea, invented by SONY with the Walkman, of taking our music with us. And when Jobs turned the world of music upside down with iTunes… well that was all she wrote. (Who besides me is still trying to remember the PW on their iTunes account so old gifted songs from other peoples’ collections can be ‘legally’ played? I always just give up when it refuses to recognize my name and PW… so it goes.) But Jobs was one of those guys who was like Kelly Johnson, the legendary Lockeed designer. He came up with the P-51, the P-38 and the SR-71 Blackbird, a full forty years of world-class thinking out of the box. Not many of us are gifted with such talents. We might get to be a part of one big deal in a life time, but it’s rare when you can keep throwing stuff at the world and the world loves it. 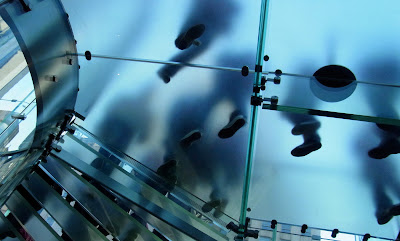 the throngs throng to the Apple Store, 5th Ave.
Jobs might not have been THE sole designer of any of the great APPLE goodies, but his influence in terms of the constant surveillance of look, feel, functionality… It all comes down to that tag line they use: if you don’t have an iPhone, you don’t HAVE an iPhone. As a Droid X owner, I marvel at the photo capabilities of the iPhone. You can shoot a picture, and then, amazingly, just keep on shooting. What a concept. The Droid, you’re lucky to get one shot, and doubly lucky if it fires in the 5 second window you want it to. The second frame… well, its like the All-You-Can-Eat Sushi buffet, except you really only get one piece of fish until time passes and it deems you ready for a second. The damn iPhone just keeps taking high rez images when you touch the button. I agree, the button isn’t always in the handiest place, but when you look at what’s been done with iPhones in photography, it makes you want to sell your Nikon and Canon shares tomorrow. At some point, maybe Canon will add a mobile fone to the 5d Mark iii, but I’m not holding my breath.

When I think back to, say, the B-25, the twin engine bomber from WWII, I see more than just a plane which is designed to drop bombs on soldiers and ammo dumps (and, alas, a lot of cow pastures.) I see a really beautiful piece of industrial engineering, aluminum curves and deep-throated engines which are locked into a specific period of time, and which speak to the ability of people to create things which are a quantum leap beyond what went before them. 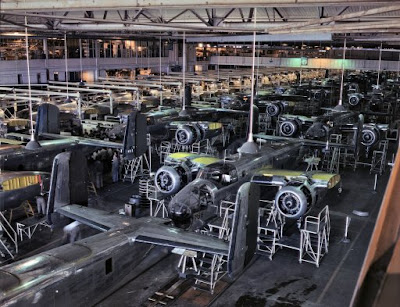 the B-25 line, circa 1944
The APPLE products are like that. They are (usually, not always) a leap ahead of what went before. They are fun to use simply because they are elegant in use. (Please, don’t beat me up about some silly IIe disc drive thing thing or early Mac which didn’t work, ok?) The point is, we have very few folks in our society who wield the kind of influence that Jobs does, and from whom you can see a long list of really hot products. Do iPhones and iPads really make us all “more productive?” It’s worthy of a long discussion, I guess. But in the end, we need a few people who are able to float really advanced designs, shepard them through the design and manufacturing process without losing the original mojo. Jobs was apparently one of those guys. And of course it remains to be seen if there are others at APPLE who have the same sense of taste, determination, and moxy.

I know the biggest mistake of my adult investing life took place in late 1997. I was in Silicon Valley, doing the TIME Man of the Year story on INTEL C.E.O. Andy Grove. Grove was the opposite of Jobs in many ways. (For example, I don’t think Andy demanded a 30$ Million Gulfstream as part of his package to stay with the company.) But he did understand the world of microprocessors and computers, and managed to lead INTEL from a company which was perilously close to folding, into the chip powerhouse of the 90s. It was during one of those afternoons when as the photographer, you’re just trying to stay up with your subject, follow him wherever he goes. Our deal was simple. He did his thing, and I just hung out and shot a few pictures. At one point Andy picked up a Wall Street Journal and started perusing the stocks page. “Wow,” he said, in a very understated wow voice. “Apple is $13 a share……”

Here is a hint: when you are hanging around with someone who really KNOWs what’s doing in a sector of business, and he says something like “Wow, Apple is $13 a share…,” take my advice. Take every penny you make on that job, and buy the stock in question. Had I done so, my approximately six grand (it was a long story!) fee would today be worth something like two hundred thousand. It’s not as if it’s all about the money, or even all about the stock. It IS about the fact that while the iPhone only has something like 30% of the mobile phone market, among the people I know its more like 75%. But looking ahead into the next decade, who is going to be the college drop-out who figures it out, and leads us all to the next step in stuff. Where is that kid now, in the computer lab? Starbucks, upstairs on his 7th espresso. I hope he’s somewhere. We need ‘em. We’re just sayin’… David