Steve, a friend who is also a poet, philosopher, and wordsmith said it best when he described the media reporting on the hurricane as weatherporn. There is no doubt that people needed to be warned, that another Katrina was to be avoided at all costs, and hurricanes are to be taken seriously. But, thank God, USA and TNT kept their regular scheduled programs, and TCM, felt no need to show old movies about hurricanes and earthquakes – although Clark Gable’s San Francisco is one of the best movies, ever.

Generally speaking, it was a wonderful weekend. My friends Soozie and Jane came up from Virginia to see “War Horse” and “14 flights”, a Fringe show. Both were excellent and totally different except for the level of anxiety which both shows produced in the audience. The news about hurricane Irene started in earnest on Thursday morning. When I say earnest, it means that the media hysteria started to mount on Thursday, reaching epic proportions on Friday and until the hurricane hit on Saturday – at which time the reports continued but the questions changed from, ‘where’s it going to hit?’ To ‘how much devastation did it do?’ How many lives were lost? And what were the “gruesomest” descriptions of the most horrible deaths. On the east coast, everything was cancelled, including my favorite TV shows, like “Sunday Morning.”

We merry band of maidens faere were determined not to participate in the hysteria. This was not easy when you think about the way in which Irene was described. Here are just a few of my favorite adjectives from our friends on cable and the network shows: Heart pounding, ferocious, howling, bracing, monster, vicious, brutal, cruel, vile. Clearly there was no good news. There was much ado about the path the storm would take. And, once it hit every weather forecaster took credit for predicting an accurate course of devastation.

It was when the chatter was so frenzied that we decided that we would watch the Weather Channel, but we would listen to the new recordings of “The Gefilte Fish Chronicles” rather than listen to the talking heads. We also decided not to be in the presence of anyone caught up in the weather porn. We did not rush out to buy supplies (aside from two bath stoppers at the Dollar Tree) nor did we take cover in anticipation of pending disaster. It was not that we didn’t take the storm warnings seriously. But it was impossible to take the media seriously. Talk about overkill.

Anyway, we managed to have a storm-free visit. The girls did not change any plans. They took the train home at noon on Saturday as they had planned. The only change I made was to stop at the airport and pick up my cousin Honey because she had no access to public transportation –there simply wasn’t any for her to take. 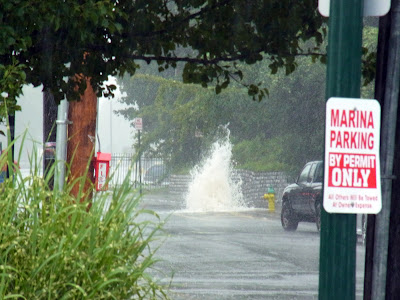 On Sunday, the pressure from escaping water, caused this manhole to imitate Old Faithful...regularly
The storm hit us in Newburgh late Saturday night. We lost a few tree limbs but not our power. It makes you wonder who is up in those trees, cutting the boughs and limbs down to a manageable size so that when they fall, they make nice little patterns on the deck. The waterfront and marina were hit pretty hard but recovery was quick and businesses were opened back up by Sunday night or Monday. 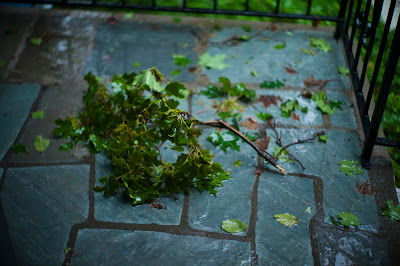 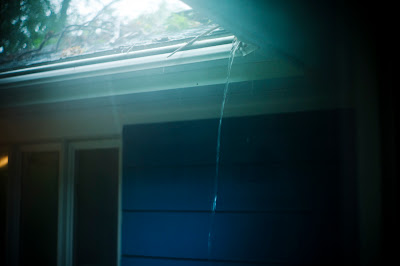 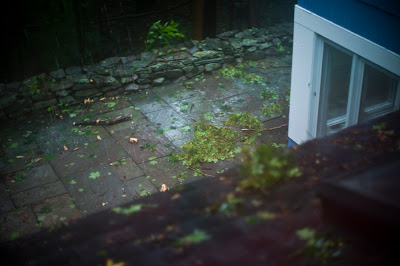 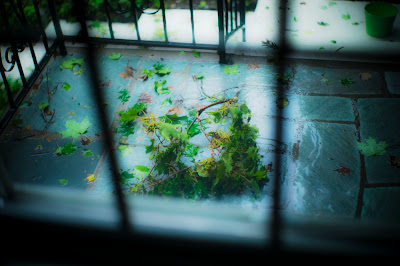 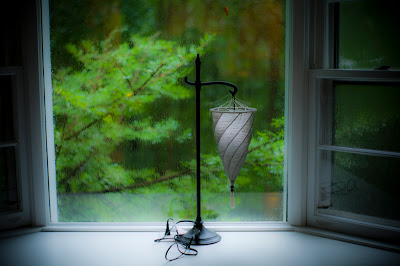 views from around the house...
Once the brunt of the storm was over, the rain died down, and the winds were no longer treacherous, people gathered at a local marina bar to share their stories, have a few Bloody Marys, and watch the Food network on TV. Somehow even with water knee deep on the sidewalks and torrents popping off the awnings, watching a Bobby Flay BBQ Throw Down seemed to make excellent sense. We’re just sayin’…. Iris