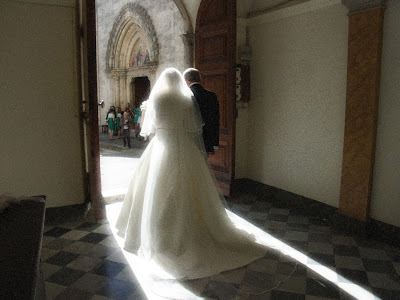 Have you never been to a wedding in Italy, in a castle? Not a destination wedding, but one where the couple is Italian and the bride grew up in castle. Sounds Like a fairy tale, right.) If the answer is yes, you were probably at the same wedding we were. If the answer is no, you have missed quite a treat. It was not quite a Fellini movie but it is the closest we will ever come. With that in mind, the drama unfolds. Certainly well worth a blob and pictures from the unofficial photographer, (there was an official photographer, but he was not as cute.) The wedding was called for 5:30. The couple wanted everyone in the church so the ceremony would begin promptly at 6. David started to shoot intimate family photos at 5:00 and the getting ready was progressing as planned. Some of us, who were feeling a bit in the way, went to the church to reserve seats. Did I mention that the Priest is in the throws of full blown dementia? We'll get back to that. 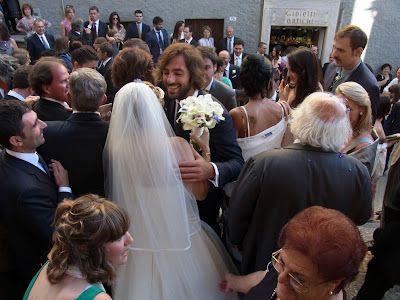 There were about 200 guests in the church, which was tastefully decorated with a ruby red carpet and delicate bouquets of white lilies on every other pew. The church is in the middle of the small village of San Casciano dei Bagni, where everyone knows who belongs there. So even if you didn't get an invitation you were welcome to come to the ceremony, or be part of the crowd that, much like a Felini movie, acts as participating observers. The Catholic ceremony was much longer than it should have been because the Priest lost his place any number of times. The lapses seemed to be expected. 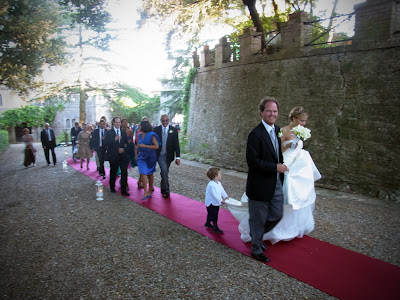 They provided adequate time for people to chat and catch up on the latest news. A not unimportant exercise in Italy. In fact by the time the ceremony ended, everyone under 30 was gone -- including the bride’s mother. She didn't leave entirely, but she did go outside to organize the throwing of the rose petals. And much to everyone's surprise, the ceremony ended, the rose petals were thrown, and the happy couple led a parade through the village, (kissing local friends along the way), into the garden of the castle where there were 50 tables elaborately set on the tennis court, right next to the swimming pool. My favorite thing about the wedding was the overwhelming generosity with which the hosts treated the guests. For example, instead of asking for a glass of wine, the guest just took a bottle with the number of glasses they needed. There was an appetizer course (sausage, cheeses, tomatoes, wood oven baked pizza bread, rice, and fruit frito misto), after the first selection of treats, which was passed on trays, there were two pastas and a number of other vegetables served. It was about 11 before Feda announced the steak break, and 1 in the morning before the wedding cake (3 giant layers of napoleon), was cut. There was dancing til dawn. A DJ/karaoke Entertainer who amazingly sang for four hours without a break. And with whom the guests could sing. And much love and goodwill. We made our way home at 1:30, happy exhausted and very well fed. More drama unfolding tomorrow. 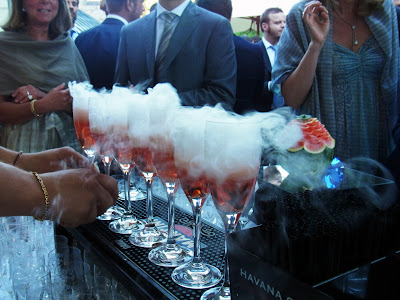