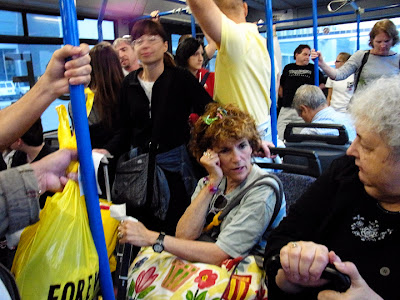 We arrived at the airport – JFK - Terminal 2 Delta airlines, at 7pm. The plane was on the board for 9:15. There was a lovely receiving line of employees and very few passengers. We had followed instructions to Terminal 2 as was marked on our boarding passes, but quickly discovered we were actually leaving from Terminal 4 -- which we were told was quite a distance and we would have to take a shuttle bus from gate 19. It was early and we were so amused by the short lines at check-in and security that we went to the Delta Club -- in Terminal 2. The club in terminal 4 is outside security and that was logistically impossible. 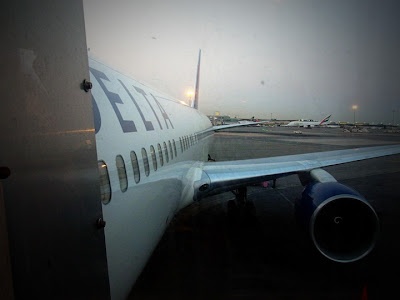 The club was crowded and without any character. We decided the boarding area had
to be better. We were wrong. As soon as we sat down and got comfortable they announced that the shuttle was leaving and we should get ready to board. Which was also not true. It was 45 minutes before we boarded, and after we reached the plane, which was on the Tarmac and not at a gate, we waited another 45 minutes to get off the bus, and climb the stairs. Yes steep stairs in the middle of the Tarmac. But this was only the
beginning. 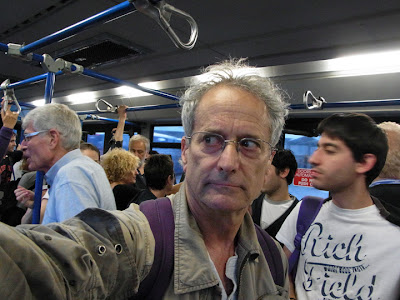 We waited another 45 minutes until we left the middle of the Tarmac to get in
line to take off. Intermittently, the pilot apologized because it was so hot on
the plane. Duh... A sign that more problems were on the way perhaps. It was at
least another 45 with the plane just idling in line when the pilot came back
on to say, the problem with the air-conditioning was related to the air
circulation, and we would proceed back to the gate. 45 minutes later the pilot
announced that we would need to change planes. I threw up. I have never done
that on a plane but I just let it rip. The bad news was that there was no vomit
bag. The good news was that we were changing planes. 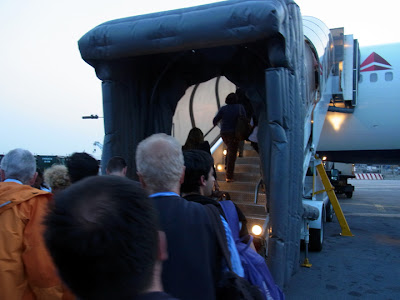 We were told to proceed to gate number 6. We had arrived at gate 4. 300 of us
proceeded to gate 4 waited about, you guessed it, 45 minutes and were told that
there was yet another gate change and now we needed to go to gate 5, which was
closer to the aircraft. I have no idea what that meant. Anyway, lucky us, we
were offered a $6 voucher for complimentary food service, but only grunion
donuts was opened. For $6 you could almost get coffee and a donut (it is the
airport, after all).

Not to be deterred, I ate a donut, had some coffee and perhaps, said a prayer.
Is Italy worth all this trouble. I think it is but i'll let you know in 45 minutes.

I think you must have had one of the worst pre-flight experiences I have ever heard of, and everthing occuring in 45 minutes really was just icing on the cake. I really hope you have a great time in Italy.

And yes i know italy is not near greece. Im in ancient civilization mode.