Other than Newburgh, NY…… San Casciano de Bagni might be my favorite place in the whole world. Yes I love Pienza with a passion that cannot be explained, but that can be attributed to the Romeo and Juliet thing. In San Cash, as we refer to it, we have amazing friends, two of whom own the most delightful B&B in Tuscany, or Umbria. And the others live in a castle (not a pretentious castle), have their own swimming pool with healing mineral waters, and are the sweetest people imaginable. But I'll get back to that. First I want to finish the trip saga --which you already know, has a happy ending. But can you believe that Delta Airlines will no longer fly Jewish passengers (or anyone with an Israeli stamp in their passport or anyone who has a religious symbol that is not moslem related -- I assume that's a cross), to Saudi Arabia. Not that we know anyone who would want to go there, but it should be fascinating to see how our government responds to the outrageous agreement by Delta to comply. But that's not what I wanted to blob about.

It was neglectful of me not to mention the people on the plane who were seated near us. You know how when you are sitting in the waiting area, before you board the plane, you see a family where the adults have no control over the children and you think, Geez, I hope they are not sitting near us. It would be torture to have to deal with that for seven and a half hours. Well, did we get lucky. The children and their Nanny sat near us. The parents, grandparents, and friends sat in First Class. The children were incredibly well behaved unless a member of their family came to make sure things were OK. Not that they would have given up their seat for the Nanny (who was a grown-up), but just to pose for people on the plane. And pose they did. In fact, the father unfortunately posed too long when we were about to land, and the other child, she must have been at least four, cried, screamed and carried on so, that he was forced (he did it with such reluctance), to sit with her on his lap while we landed. The Flight attendants were not too happy about this but it was the better of the choices they needed to make. It never occurred to him to just switch places and send the Nanny to First. I guess she must have had cooties.

Anyway, AS LONG AS WE'RE TALKING ABOUT LANDING (oops I forgot I didn't have to yell). The pilot, as this pilot often did, announced our progress and asked people to take their seats. It was late and Pisa is a small airport so he wanted to be certain we had a gate. The majority of people respected his request. But their are always that few, who think the rules are for everyone else. In desperation, one of the Flight Attendants had to slap a guy on the hand who was still fooling with his suitcase and she pointed and shouted at someone else who refused to sit down and shut up. We landed.

We went through customs and went to find our bags. David went to get the rental car and I said I would collect the luggage we had checked. We were among the first people to clear customs so when I got to baggage there were very few passengers waiting with me. But soon enough there were hundreds, among whom were the grandparents of the children who sat near us. The grandmother had the 4 year old, in a carriage, turned so it and she blocked a good portion of the conveyor belt. When we saw our bags passing by for the third time, and the carriage and kid and grandma prevented access, we suggested she move the baby back a bit. Her face was such that I expected a, "Do you know who I am?" And at almost the same time, one of their other traveling companions, came running over to tell Grandma that they had all been searching for her and were very upset that she had disappeared without announcing her intentions to take the baby and block everyone who was trying to retrieve their bags. Which the poser/father had already done. 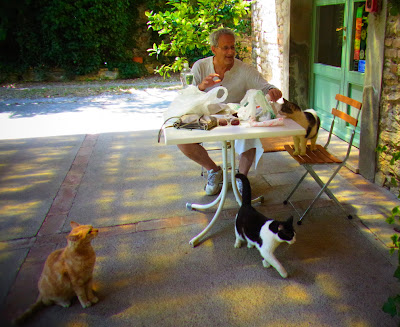 DB and the "Crocetta cats"
I managed to identify David's black roller bag, which looked exactly like every other black roller bag on the belt, except everyone else had some way to identify, their bag-- a ribbon, a stamp- and David didn't. So I simply looked for the one without any special marking. As it turned out, we had to take another shuttle to the rent-a-car building, but we didn't have to wait 45 minutes. 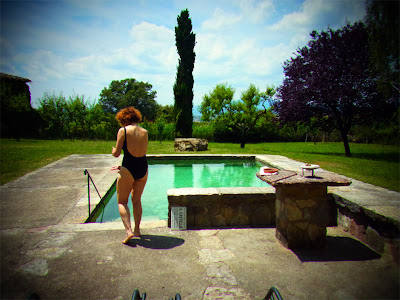 at the pool...
We arrived in San Cash yesterday, to many joyful reunions. But today we were reminded of all our friends and family with whom we have shared this always memorable experience. A big hug to -- in chronological order, Jordan Kai, Joyce K, Doug W, David F, Melanie O, Joe and Marthena C, Birra Billy and Cathy, Patrick and Timothy and Pablo B, Joe O, and certainly not to be forgotten Soozy M. We're Just Sayin’…. Iris 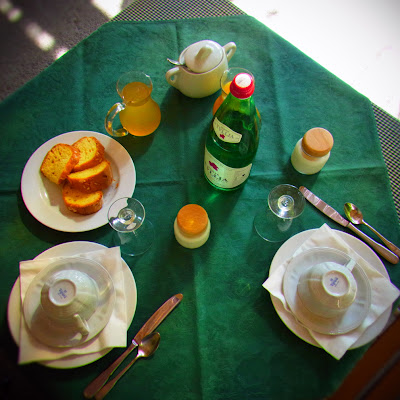 a breakfast worth waking for
Posted by Iris&David at 12:40 PM