So what do you want first, the good news or the bad news? Nevermind, I like to end on a happy note.

A tree fell on our house. There was a storm. A big storm. The hail was big as golf balls (and I don’t even golf.) The sky was so black it was impossible to see 2 feet in front of the car. You couldn’t pull over because you couldn’t see what you might be pulling on to. It was terrifying. Certain the car would be lifted and twirled until I was not in Kansas anymore, I shouted all my goodbyes. And then I was at Joannie’s house, and I lived. However, although we did not lose electricity, a giant branch fell in the back. It must have hit with such force that it knocked over a large photo of Jordan and broke the glass on the frame. It’s looks like the damage was minimal and the house is still adorable. That’s part of the bad news. 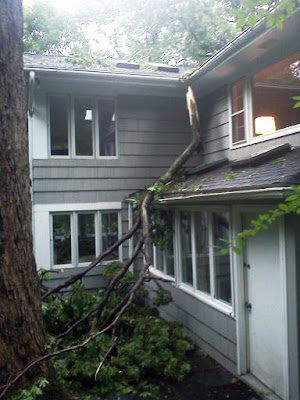 When the invitation came for the Tony awards and after party, the first thing I said was, “I have to call Aunt Peppy.” But she is longer able to answer the phone. And so now life begins for all of us, as orphans. My guess is that there are a whole lotta 60+ year olds who have become recently orphaned. With the death of Aunt Peppy, for me and my cousins, her passing was also the end of a generation. Now we are the senior generation – from our eldest first cousin, who is in his early 80’s, to the youngest first cousin – late 50’s, none of us will ever think of ourselves as “the kids”, anymore. On a lighter note -- (what does that mean? What can be lighter about a note?) That’s the end of the bad news and it is not what I wanted to blob about. 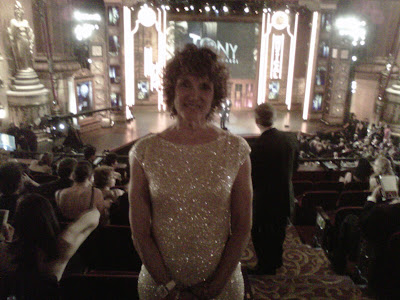 Imagine the sheer joy of a struggling producer, receiving an invite to the Tonys, and the After Party and an actual ticket for the ‘gift bag.’ (It’s always about the gift bag – with dreams of expensive make-up, new tech toys, trips to foreign lands, free tickets for shows). I’ll get back to the gift bag. 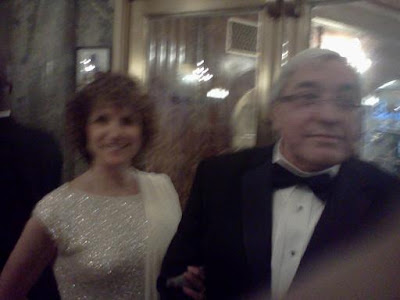 Big Fish Big Pond, in attendance
We arrived at the red carpet fashionably late. The doors closed at 7:20 and we arrived at 7:15. Not because we were so fashionable, but because we were having drinks and a schmooze with other insiders around the corner. My dress, (my mother’s dress), was quite smashing. Not only did other Tony guests stop me to remark about it, every server at the after party had a comment (and you know they all have a sense of style). The show was entertaining and even watchable for the first time in many years. We had good seats and were able to see everything that we were supposed to see and more. Loved that the “Book of Mormon” took so many awards but, along with Norbert Leo Butz, it would have been terrific if Donna Murphy had taken the Tony for Best Actress in a Musical. 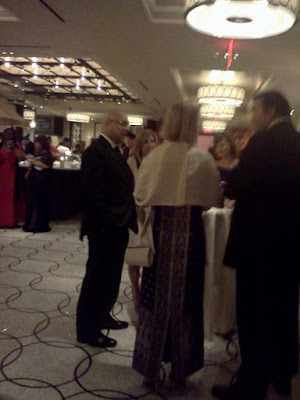 the After Party
We commandeered the second bus to the party, which was at the Plaza. There were at least two floors of tables and chairs. Twenty open bars, 25 food stations, including sushi, a raw bar, a sliders bar, grilled fish bar, grilled vegetable bar, cheese and cracker area, desserts galore and of course, like any good Bar Mitzvah, a pasta station. The selection and quality were excellent. It was a colorful scene, with Stephen Sondheim holding court in one room, Tony winners accepting congratulations in another, and theater gawkers trying to take photos with celebrities like Stephen Colbert. Everyone who is anyone in the theater, as well as a great many rich corporate executives were there – I like to think--with me. 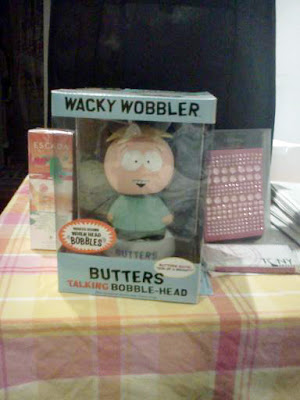 the SouthPark Bauble Head
At the end of the evening we walked to the 5th Ave entrance, turned in our prize tkts and got the GIFT BAG. It was the only moment of disappointment during the whole event. The contents were not expensive and or elegant toys… The was a bauble head, a bar of candy, a cell phone holder and some cheap cologne. It certainly wasn’t an Emmy or an Oscar gift bag. So who cares! My first year in NY and I got invited to the Tonys. This year was just practice for the future, when we sit with the winners and accept our awards.
“Gefilte Fish the Musical” or bust! We’re just sayin’.... Iris
Posted by Iris&David at 6:20 PM