What Doth It Mean? 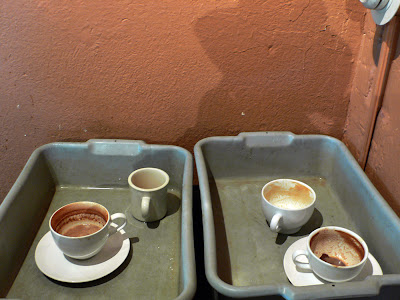 I think we’ve turned a corner. The last decade or so saw the emergence of companies who were focused on building their “brand” (I find that a really annoying concept) and wrapping it all in the ribbon of “customer service.” All the geniuses who teach and graduate from Biz School seem to be locked on this idea of “branding” and all the things which it brings to a company’s perception by the public. I suppose when you think about it, large organizations are really amazing beasts. Coordinating thousands of people, what and how they perform their functions, and making sure the equipment works, is truly a marvel. Imagine that you had to actually be the person in charge of , say American Airlines, and know that in all 100+ stations, the ticket staff, baggage handlers, mechanics, gate agents and crews would always show up where and when they were supposed to. That the planes would work most of the time. That you could count on the airport support to let you move those planes around. I mean, its mind boggling (yea, there are a lot of thing which boggle the mind, but very large arrays of people working in coordinated groups always gets my attention.) So many things to go wrong, so many people to potentially screw up. So when large groups succeed, you really do have to marvel at it a little bit. Whether it’s a heavy group (like an airline) or a light one (like Starbucks) you have to marvel at their ability to get thousands of people to show up for work each day, and perform their team functions in a way that lets the company benefit.

It’s so easy, especially when you see a company dealing with badly or under trained staff (most, but not all cable TV phone reps, for example) to imagine their ability to stay in business is marginal. Generally speaking, I find that the kids (ok, even the 54 year old kids) at Starbucks are somewhat better trained, though not always, than the folks at Dunkin Donuts. The Dunkster has made an enormous investment in the last five years across the country taking their stores to places previously well beyond the DD tradition. (They were started in New England, and it’s not uncommon to find a half dozen DD stores within a dozen square blocks. You wonder how any of them stay in business.) I was so impressed by them five years ago when they began attacking Starbucks by serving espresso drinks for a buck less than the vaunted Starbucks “grrrrrrandé latte” that I really thought they were going to carve out a new, value oriented coffee market. I even bought a few shares of their stock. The problem was, many of the folks working at DD didn’t really GET the espresso thing.. that it isn’t simply a stronger version of “coffee” but a whole other drink requiring a little extra effort to master. On top of that DD wouldn’t provide personal sugar and milk tables, you had to tell them up front how you wanted your coffee, and more often than not they got it not quite right. So, the battle of the coffee flavored beverage drinks continues, each trying to secure their own “brand” as the one of choice amongst millions of coffee flavored beverage drinkers. There was a couple of year period when I actually did the grande latte/cinnamon scone thing at Starbucks on a regular basis. But the ongoing hockeypuckization of those scones finally wore me out. The coffee is still OK, the iced probably the best of all But in their rush to create a branded (green Logo, please) presence everywhere they made a chill sitting area, often upstairs, with tables and power points to keep the laptop crowd happy. People made it a place to keep their offices. A place to conduct business meetings. A place to gather and surf the net. You could pop into a Starbucks on the corner of 8th avenue and 39th street, at 11 in the morning, grab a coffee and run upstairs to the “lounge,” and if you came back a couple of hours later, you’d have seen probably half the tables peopled by the same ones there at 11, plugged in, and paying no rent for their offices. 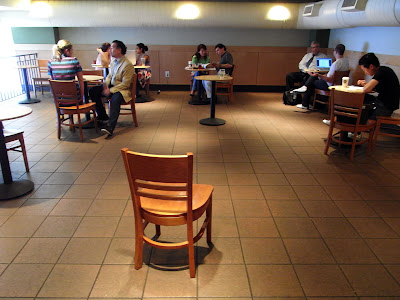 Upstairs at 39th and 8th, in the old days of 110v
The HQ mavens at Starbucks at some point years ago must have done the math, and figured out that even though some of those sitters might only have a coffee or two, maybe a scone, that it was still worth their while to cater to the ‘connectivity’ crowd. Well,until recently that is. In what I find a far stronger “branding” move that anything I’ve seen there in years, Starbucks at 8th avenue and 39th street has recently done the unthinkable. They have taken all their 110v outlets out of service. The places where the plug ins used to sit happily in pairs, near the chairs, and especially adjacent to the computer table which seems to have been brought in for just this purpose, are now covered with new, freshly painted solid covers. You can walk the whole of the establishment and find nary a power point. So it opens back up the whole discussion about the role of a café (in the French sense, where you pays your Euros and stay as long as you like, or the former American model which made you feel guilty if you stayed longer than 20 minutes) in society. Do we encourage behaviour which seems to minimize conversation in an otherwise social environment? I have gotten those “looks” in some café’s for seeming to break the inviolate rule of quietude. (But, yes, I even speak to strangers on elevators. Go figure.) But for Starbucks, I am assuming this decision came from some place higher than simply the store manager. I can see that part of the new “Branding” effort on the part of the company is going to include “hurry your little sweet selves up.” I don’t blame them I suppose if it comes down to being able to serve people for whom there are no places to sit. Restaurants definitely practice a similar motif, in bringing your check whether you ask for it or not. Success has its price. But to me this is a seachange in so many ways. Starbucks was the incredibly welcoming place where in the new century, yuppy moms would bring their toddlers to have a sixteenadjectiveflavoredsyrupadded Frappacino, one with a calorie count at LEAST as high as the Chocolate Malteds from Fernwoods Ice Cream store which I had as a high schooler. That there is no longer a welcome mat out for those little mini offices and the people who occupy them, is a sign of things to come. I guess I’m just not sure what. I know that Dunkin Donuts will probably not engage the idea of wifi anytime soon. I do see the “free Wifi” signs popping up in the least likely places. Greek diners. Lounges and bars. Wow, there is nothing groovier than a Rum & Tonic a chance to trade stocks on Etrade. Make mine a double. I need that electrical flow as long as I can keep it. We’re just sayin’… David
Posted by Iris&David at 11:25 PM