Jimbo's (and an entree to the Hamblogger)

While we are continuing to blob here, I have also taken on an adhoc role in helping find good burger joints around the country, around the world, by my photographer friend Justin Sullivan. He works out of San Francisco, and is, in short, dedicated to hamburgers. So he started a blog called the Hamblogger, and I have signed on as a sometime contributor. Ad hoc, I believe, describes it. You find a good burger, you photograph the hell out of it, and then write something as if you were the lone food writer for the Herald Trib. So, here is my new (today) contribution to the Hamblogger... and I hope you'll check it out too. I'm amazed how much people dig burgers. We're just sayin'..... David 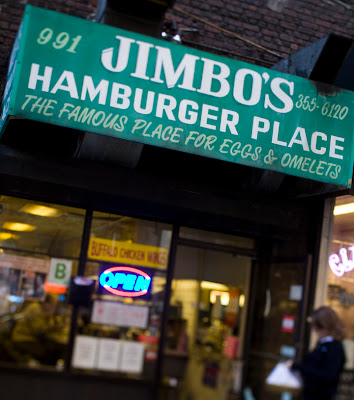 (Correspondent’s note: this, like most postings here, is being written just after returning from the restaurant in question, and follows severe handwashing with smelly disinfectant soap, and a two minute gargle with Listerine to render the writer ready to actually lay fingers ON the keys.) 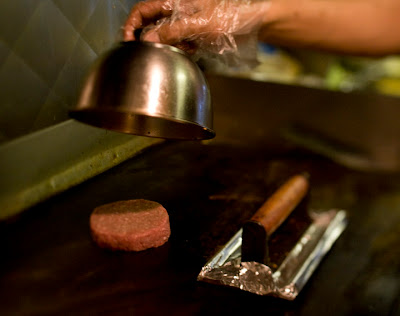 Jimbo’s Hamburger Place in Manhattan (island, not beach) is the kind of place we all wish we could find more of. Somewhere in the swirling dustbin of the techno/ipod/cellfone/textwhileyouwalk age is a desire to find something less complicated, less reliant on technology, less bound to a future whose life seems bound up in uncontrolled button pushing. Jimbo’s is that kind of place. Starting as a hole in the wall burger joint in the 1950s by an Arkansas imigrée whose moniker stayed with the place long after he departed, this miniscule grill has been serving up burgers, toasted cheese sands, and a small variety of grilled goodies for decades. It is the archetypal “analogue” café in a world of binary. Just 10 counter seats and a couple of small, crowded tables, the place is a microcosm of the sort of intimacy which marked luncheon spots for years. Jimbo got the place going, left his name and over the years the ownership has changed a couple of times. 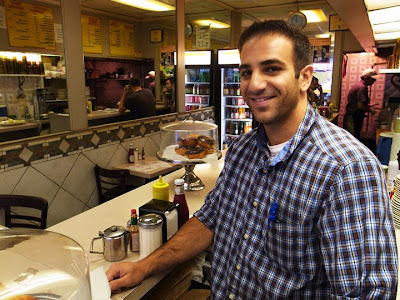 Today the proprietor is Abe Mostafa, a young man whose father came to New York in the 1970s from Egypt, and whose family has been churning out burgers for nearly 30 years. While there are a few other places around the city calling themselves “Jimbo’s” they aren’t a chain. This is the original, and a one of. 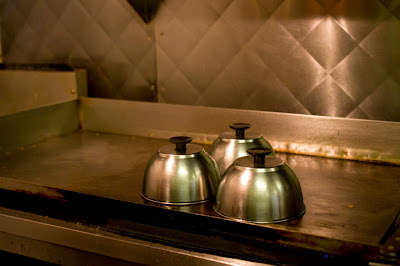 I once did a story in Missoula on the search for the most perfect slice of American Pie. In that quest I met two women who each had been making pies for small café’s since the end of World War II. By their count they had made something like 40000 pies each. The mind boggled at imagining the amount of rolled out dough that meant. Standing next to the tiny grill at Jimbo’s, it was difficult to imagine the enormous number of burgers that had been turned out in the last fifty years. Each cooked the special “Jimbo’s” way… with a silver cover steaming meat as it grilled. It looked like an aerial view of a small Eskimo village. The igloo like shiny metallic covers keeping the juicy flavor inside the dome. (Maybe that’s what they hope will happen at the Superdome when the Saints play.) 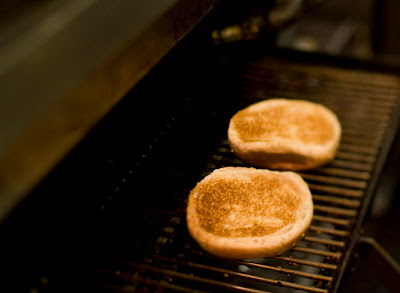 I ordered a bacon-cheese deluxe, with onion and tomato. The bacon was probably the closest to the “well done” crispiness I have seen in a long time at restaurant. We’re talking crispy. The bun was toasted in the broiler, a good sign. And the mountain of grated cheddar created a kind of orange morass which needed herding back onto the burger once the plate was served. I have never been a fan of McDonalds fries, inspite of all the accolades they get (I prefer nearly anything Dutch or Flemish) but though frozen, these little sticks (done “extra crispy” as asked for) were quite impossible to avoid. 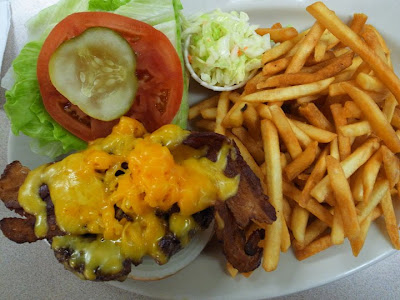 Eating the burger was pretty hopeless by hand: I got one good bite, and the juiciness of the meat (“never frozen”) just erupted, and caused the bun to quite literally bite the dust. But maneuvering my way with knife and fork wasn’t so difficult, and the flavor of the meat/cheese/tomato/mushedupbun was quite satisfying all the way to the end. At the end, there remained only traces of bacon, bun, meat, and cheese, and it required one last fork shoveling to finish the job. The meat is a hearty size: I didn’t weigh it up I suspect about 6 ounces, and perfectly formed. Under the silver dome, it cooks up nicely and remains very juicy. I’m not sure a burger can be too juicy and still be done, but this was close.

Jimbo’s is the kind of neighborhood place which draws returning customers in large numbers. They do a good take-out and delivery business, and Abe told me that a surprising number of former neighborhood residents who have moved away return to Jimbo’s for a nostaligic burger hit when they’re back in town. The place is cozy and welcoming. While I was there one guy came off the street, asked for two orders of whole wheat toast, no butter, and took them away when done. Hey, it’s New York, stuff like that happens. But being New York, you come to expect that a place that’s been in business for almost 50 years must be doing something right (though that’s not always the case) and at Jimbo’s, they just keep on keepin’ on. 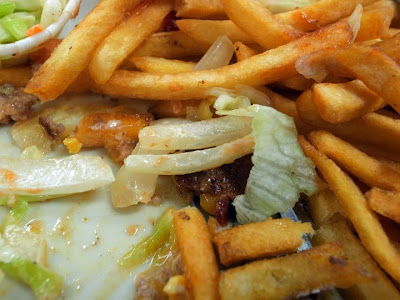