There is no whining involved in the blob, however… today is Mom’s and Aunt Peppy’s birthday. Aunt Peppy went out to lunch and had a Jack Daniels. Mom wasn’t able to be there. At least not all of her. When she died, you may recall – if you are an avid reader, Aunt Peppy said that the only way she could live with the loss was to believe that half of her was buried with her twin and half of her twin remained a living part of her. Mom drank scotch. Aunt Peppy didn’t care. She said that the half of her who remained above round was going to celebrate their 90th with the drink that she preferred.

That’s what it was always like for them. They loved one another for 89 1/2 years and just couldn’t be together for more than a few days at a time. They were very different characters, and when I say characters I am not kidding. Aunt Peppy was always the head of some committee or organization. She was a life long member of Haddasah, kept a Kosher home, was a serious religious person and tried not to smoke on the Sabbath –sometimes it worked. She always thought she was in charge (as Aunt Sophie would say) , and their other siblings didn’t make a big deal about it. She was neither flashy nor fancy but she was elegant in her demeanor. She didn’t eat in a (non-Kosher) restaurant, except for an occasional salad. 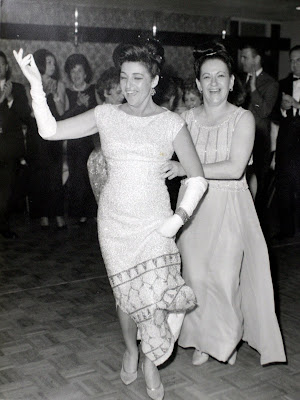 Rose and Peppy... doin' their thing
Mom was neither religious nor an organization person. She worked as a hair dresser (in our basement), and a sales rep for an uncle’s knit company. She drove a peach car and wore feathers and fringe. My brother never wanted her to come to parent-teacher night because he thought her appearance was embarrassing. And yet today he spent a good number of hours with her gold glitter sneakers. No one in Boonton had quite the sparkle that Rosie had.

They were both incredibly funny. And they loved to play cards. They were not great cooks but no one had the guts to tell them. Peppy baked and Rosie defrosted. They made great soup, (chicken, cabbage, and split pea), but hardly ever had a fresh vegetable lurking anywhere on a plate. They graduated from canned peas to frozen because if they were packaged that meant they had government approval. She ate out, mostly in diners, the IHOP and Chinese. And despite her introduction to dim sum and some exotic selections, she insisted she never had duck – every time she ate it. She July, we have replaced our labational toasts of “Cheers” and “Here’s to ya…” with …. “ I’ve never had duck.”

What my cousin Eden and I discovered as kids, was that when one of them was sick, the other would feel it. The conversation went something like, “Did your mother hurt her leg?” “Yes, why?” One of us would ask. “Because my mother is limping.” 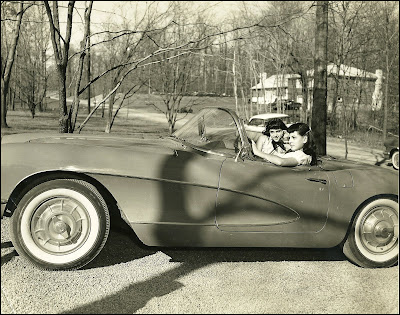 Iris and Eden in Larry's (another cuz...) '62 Vette
It is hard to imagine how that connection could be broken, because despite how they lived their lives, the arguments, and the differences, they were not only from one mother, they were from the same egg. When you see them in the Gefilte Fish Chronicles, at times they appear to be impatient, almost annoyed at one another. But that was how they expressed affection. Never comfortable with the idea of separation, they simply never said goodbye. Not on the phone, not when they parted, and not even when Rosie died. Nope, they remain one entity in different places and wherever they are tonight, they will light those ninety candles together. We’re just sayin’…..Iris
Posted by Iris&David at 10:13 PM