What A Party! Party?? 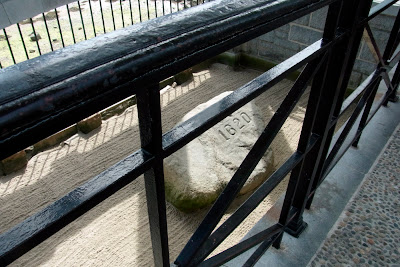 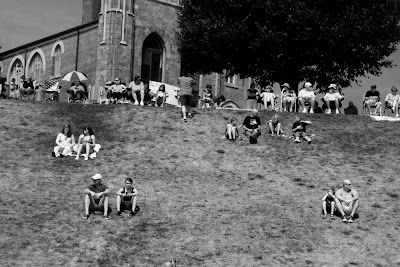 they come from far afield, and sit upon the hills of Plymouth....
The July 4th parade in Plymouth may have been an precursor to a whole new political trend. The lack of party affiliation. In the parade, where there were 60 floats, and at least 30 were political candidates from the South Shore, there were only two with party affiliate designations on their signs. We inquired about whether they were Dems or Repubs, and they seemed startled, even uncomfortable, but eventually the fessed up to party of choice. Anyway, there was one candidate who was running for Sheriff who, on his literature admitted he was a Dem. And the other was a float for the Tea Party – that is quite a Party, as we have all seen and heard on the news. Is this a sign that the good Old American two-party system is on the wane? (What does wane mean? Wane is one of those words that no one uses anymore because there seem to be better choices. Like decline seems so much hipper, and deteriorate much more visual). Moving on…

David had never seen Plymouth Rock. So imagine his surprise when he discovered a mere pebble (by Ayers Rock standards), protected by fencing and concrete barriers. “I guess they think it’s going to escape,” was the most sensible explanation shared by a 6 year old sharing the view with him. Yes, Plymouth Rock does not meet expectations – especially when you have waited your whole life to give it a glance. The first time I saw it, was when, as a young mother, Seth and I explored many historic sites in the commonwealth. Well, we went to Sturbridge Village almost weekly because they had great cookies, and we went to historic parks, where Seth was chased and terrified by a loose and asocial goose, and we went to Plymouth Rock. It was before anyone thought it would escape. Although there was a chain link fence, nothing else protected it. Seth was pretty bored with looking at a rock so the highlight of the trip were the fabulous ice cream cones I bought as a reward for driving all that distance and not being very impressed. 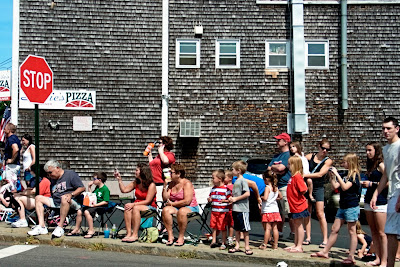 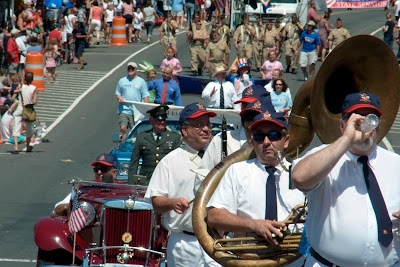 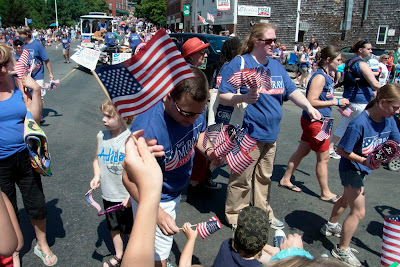 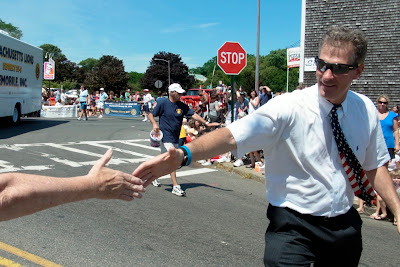 Scott Brown for Senate.. at least we know where he stands 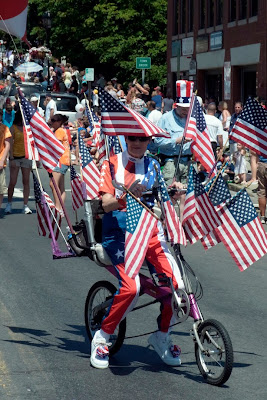 But back to the politics of today. There were candidates who sent groups of people with signs, but themselves were no shows. And the new Senator ( Scott Brown -- who is pretty cute) was there greeting as many people as possible. There were candidates who came with bands (mostly made up of ex hippies and no doubt on the verge of receiving Social Security), and there were some, who were running for Board of Education, who personally greeted and touched every hand in the crowd. That will tell you where the real power lies. Where the real work is done. And additionally, it a sign of the power of that position. It is unclear whether they can have Party affiliations but no one did so the point is moot. (Another word like wane that sounds like an animal call.) 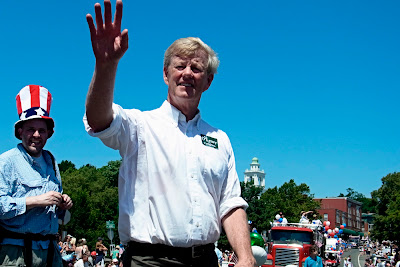 Rob O'Leary for Congress...R or D? 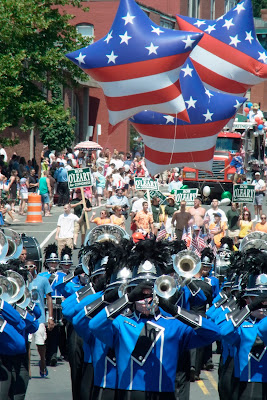 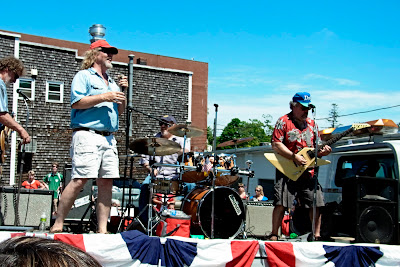 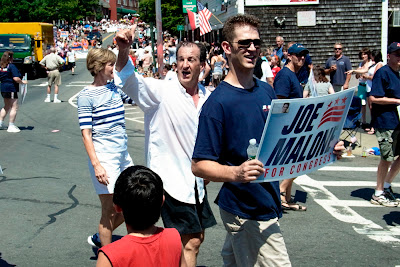 Joe Malone for Congress...R or D? 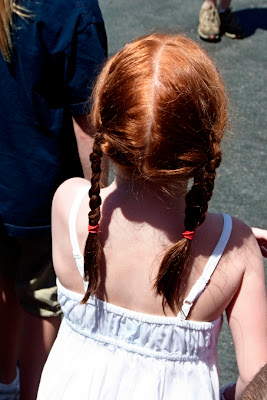 And it’s not only at a parade. I realized when I was watching a Governor and Senate race last week, that neither the incumbent or the challenger were identified by party. Have the national political parties so alienated the public, that people who are running for elected office are afraid to talk about who they are and what they believe in – other than no new taxes and no big government. I think I liked it better when candidates talked about issues, took positions, and stood for something. Most of the time, the public would align with one group or another but it wasn’t as ugly or mean spirited as it is today. And the interesting thing is that the public prefers humor to venom. They don’t trust anyone who says what they are against rather than what they are for. 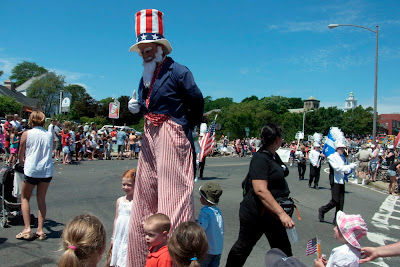 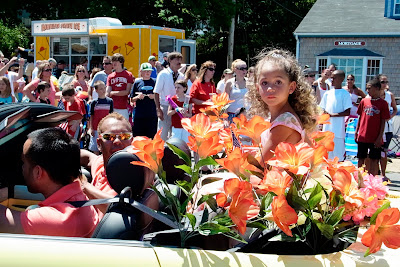 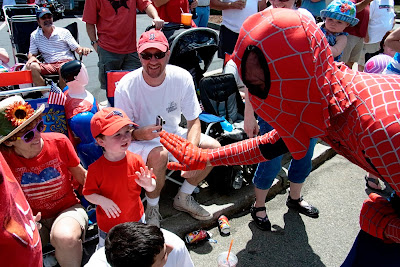 Zach and Spiderman, in the flesh 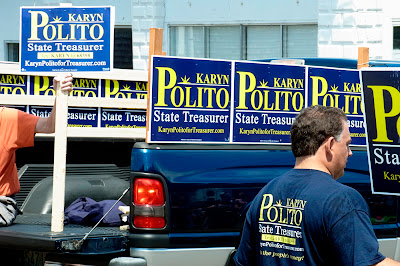 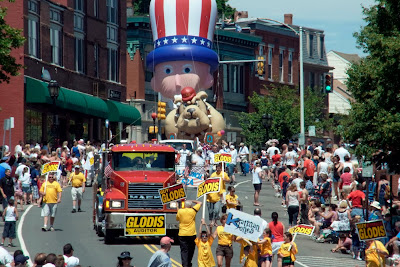 But such is life. We all had a wonderful time. Lots of family having fun together. Zak met Spiderman-- his hero and David chased after John Talcott, Jr., the 102 year old Navy veteran Grand Marshall who refused to ride in the car provided, and insisted on walking the whole route. He was in better shape than most of the crowd – or at least, he had a better costume. We’re just sayin’… Iris
Posted by Iris&David at 5:44 PM

So much for The Rock.
Like the goldfish that your kids win at a fair that requires your buying the little bowl and food and an underwater castle and then, it (no affiliation) dies---
I wouldn't know if The Rock had died/run away or been replaced many times over.

On another topic: It's time for a "Daughters: Take your Mom/Pop to Work Day."

But there's a backlash to this career-driven/materialism-driven path. On some longish days, I think women's lib is highly overrated. In my next life, I want my career to require only that I look great. With the help of my friendly plastic surgeon and my work-out partner, Lars, it's entirely possible. Dearest granddaughters: Be a butterfly forever. Or if you chose, a forester. Just make sure you choose.

I still think of it as "Take your daughter to work" which like Title 9 was created for very good reasons.

Sharing any loving time with a child leaves a tender handprint.

We did take our daughters to work. We took them everywhere we could. Sometimes that included day care and we walked out the door to work/career with two hearts saddened. I do want choice preserved for them forever. Choices lead to joys and consequences, many unanticipated.
I told myself I would parent with "quality time." Remember that phrase?

The generations have come round about. Our daughters now can take us to work. Doing this on a specially designated day recognizes them and their efforts.

Ross Perot once talked about the joy of standing in his son's shadow. It's that kind of respect and joy that I intend.

As for the rest, I wish I hadn't been so dismissive of those who took a different path just even, e.g the path of looking good.