We buried “Mama Rose” yesterday. All the guests wore sparkling rose stickers and the immediate family was in sequins. Her grand children spoke eloquently about the impact she had on their lives and how they had become better people because of the unconditional love she lavished on them, no matter where they were in their lives.
She would have been so proud.

A few months ago, when I was making my every six week trek across the country, to let her know I still cared, she told me that she didn’t think that (when she died) there were going to be many people at her funeral (If she ever died.) “My friends are all dead,” she said. “There aren’t a lot of people left in NJ who even remember me anymore. But don’t you dare bury me in Seattle. I want to be next to daddy.”

“Oh gee Ma,” I said, “We thought we would just throw your body in the Pacific Ocean, since no one will come to the service, and no one remembers you, we just thought it wouldn’t pay to make a big fuss about it.” 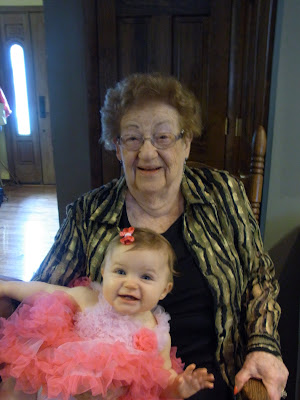 Aunt Peppy & Rosie Jean
As it turned out, (and we were not surprised), there were lots of family and friends, who wanted to pay their respects to this amazing woman who had made some kind of impact on their lives. They traveled great distances to share their stories and their sorrow. Many of the friends were mine and Jeff’s who, through good times and bad, had come to admire and respect our parents. Some people were there who didn’t even know mom, but she had done something kind for one of their parents or some relative – maybe when she was a volunteer at St Clare’s Hospital.

If you are Jewish, you are supposed to get buried the day after you die, unless it’s the Sabbath and then you wait until Sunday. Once the person is buried, the family sits in mourning (shiva) for three to seven days. Mom died on a Friday. It wasn’t quite sundown but that didn’t matter because we had to arrange for her body to be sent back to Newark. (And I know it was only her body because her spirit departed early in the day.) Skipping all the spiritual stuff – we needed to bury her next to Dad in Beth David, in Elmont, NY. So as it turned out, we couldn’t have the funeral until Tuesday and we had been mourning from Friday. It was a painfully long goodbye, but my cousins, Rosalie and Dick, opened their house to us and surrounded us with support.

Last night, my mother’s twin (the last one out of eight still alive), talked about mom and how she was dealing with it. “For the first three days, I kept saying, Rosie can’t be dead. Someone has made a terrible mistake. Then, every time I admitted to myself that it was true, I would start to cry. Then I would say, it isn’t true. I’ll talk to her later and I’ll know she’s OK. At the graveside an amazing thing happened. I figured out a way to live with this horrible reality. I knew that as we lowered her into the ground, half of me went with her. And at the same time half of her stayed in me.”

That works for me, Aunt Pep. And sad as I am that half of you is gone, I am just fine with “half of mom lives inside of you” What more does anyone need to say. We’re just sayin’…. Iris
Posted by Iris&David at 11:08 PM

Iris, your mom's passing has touched many more people than you realize.

May her memory be a blessing for your family.

I felt like I knew her from your blog.