Where Do They Go?

About five years ago, at 3am, having had dinner at a local “not New Jersey but not bad”, diner, my daughter and a few friends were driving home. Almost home, they were rear-ended by two drunks who spoke enough English to say that it was not necessary to call the police or her father. She was pretty shaken but her friend Alex had the good sense to write down their license plates, call David and the police. By the time David and the police arrived, (no surprise David got there first), the perpetrators (that’s legal talk) were long gone. But, because Alex had thought clearly, the police were able to drive everyone to the guys apartment where the kids were able to identify them because Alex had recognized the sweater one of them was wearing as ‘’one of last years Gap models’. The story goes on and on with all the victims (Jordan and friends came from all corners of the earth), appearing in court, the prosecutor being totally incompetent, and the criminals being allowed to go back to driving drunk in the middle of the night and probably killing the next person they hit… but that’s not what I wanted to blob about. The car is my subject of choice. 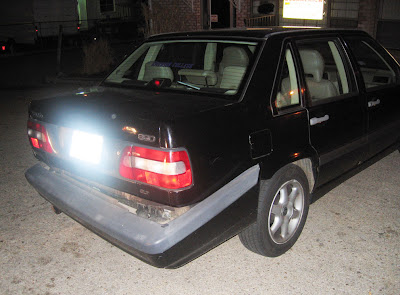 the Volvo, after the 3am accident
The 14 year old black Volvo 850 had served us well until that hit from behind. Basically the car was totaled—according to the insurance people. They said the car was worth $5000 and it was going to cost $6000 to fix it. Our insurance company and agent were State Farm. For over twenty years we have paid premiums to State Farm on our house and all our cars. Needless to say, it’s been thousands of dollars. So rather than sit back and weep for our vehicle, we told the insurance people that if they didn’t pay to fix it, we were taking our business elsewhere.

They took a deep breath, swallowed hard and paid to put the car back on the road in working condition. It was probably a mistake. The car has never been the same. It was driving OK but, the car like so many old people, has become progressively temper mental. For example, in the winter it often doesn’t want to be out in the cold, so it doesn’t start. In the summer it just wants to be left alone, so the air conditioning doesn’t work -- this discourages anyone from trying to get inside. There are also issues with the way it looks: paint is peeling, the gear shift looks like it was in a fight and the rubber sealing around the windows is ripping. But these are vanity rather than safety issues and David won’t take her to the beauty salon. More importantly, the mileage gage stopped working at 124,000 miles, although David still quotes that number as the amount of miles the car as been driven. We all know it’s far greater, but we play the game so the car doesn’t overhear what we say and get exhausted just from the idea of driving that far.

All our cars have needed repairs this week so having a vehicle in the shop is a sensitive subject. But last week, when the Volvo didn’t pass inspection David admitted that the car had probably driven it’s last mile. He thought we should offer it to one of those organizations that tow it away, sell it to make things better for small children and the handicapped, and give you a pittance of a write-off. Then, having looked at new car prices (I thought they were giving them away because the dealers are in such trouble), he changed his mind and had the car repaired enough to pass inspection. The guy that fixes the car is also an inspection station. $1400 later the dear old Volvo is back on the road. But it is driving sluggishly and if you go over 50 it shakes.

“We need to sell this piece of crap”, I said lovingly last night.
“Why? He said. “It’s still got lots of life. After all, it is only 14 years old with 124,000 miles.”
“I don’t think so.” I replied, just amazed by his total blind eye to the problem. “How many 14 year old 850’s with more than 124,000 miles have you seen around? I will not let any loved one drive it and really, we shouldn’t take it on the road either – even though the air conditioning does appear to work right now.”

We have not reached a decision about what to do. David, thank God, does get attached to people and unfortunately, things. He never throws anything away. I know if there were a Volvo retirement home where he could be assured it would be loved and someone would care for it until it went to Volvo heaven, he might consider that as an option. But for now, I guess it will live in Arlington and remain an old eye sore, but still part of our lives. We’re just sayin’... Iris

Now, I have a Jetta and love it too.

I drove my 1990 volvo until the bitter end when "electrical problems" were beyond the diagnosis of any doctor. For the last 8 months all it took was a screwdriver to start the beast but once running it was and will remain the best vehicle I've ever owned (Don't let my 95 bmw hear).