I spent the last weekend at the Kennedy Space Center, in central Florida, where every manned space mission has been launched from in the last 48 years. Everything you ever remember from “The Right Stuff” (space wise, not X-15 in the desert wise) happened right in this complex, an amazing amalgam of concrete, blacktop, briny inland yeecch water, the occasional alligator, and miles of sandy beaches. Sort of like the rest of Florida except with rockets attached. We (royal We) are now at one of those tipping points (always a delicate phrase when speaking of manned rockets) where decisions need to be made without overtly political input as to which direction the program should go. There are only a few more than a half dozen Shuttle launches left in the program, at which point the remaining Shuttles, like the SR-71 Blackbird airplanes, will be taken from service and replaced by.. well there isn’t really a replacement YET, but there may be some day. Currently the geniuses in charge (these are, frankly, NOT the scientists, but the folks who figure out how to build a new rocket and make sure pieces of it are manufactured in at least 38 states—enough for cloture) have authorized a 4 or 5 year window, in which time there will be no American heavy lift capacity vehicles: the Shuttles retired, and the new Ares not ready for prime time. We’ll be relying on, as General Eisenhower said in his speech to the Europeans announcing D-Day, “.. our great Russian allies.” They have the goods: perhaps a bit ordinary, since they have been perfecting the same big-ass rocket engines for the last 40 years, eschewing exotic and untried in favor of “wow, it works damn near every time.” Even one of the U.S. current unmanned vehicles, the latest version of Atlas, relies on Russian engines because we know they work. Nothing fancy, just success.

Well I don’t mean to belittle, for the truth is, just getting to see the Shuttle sitting on the pad with the giant red ET (external tank) attached does fill you with awe. And though it was dwarfed by the Saturn V Apollo rockets of the late 60/early 70s, it remains a giant of engineering achievement. When you think of all the stuff we throw out every day, the fact that you can re-use the shuttle dozens of times is quite cool. It remains big, and brawny, and in the end, when its launched, you see, in that cloud of noise, smoke and flame, something quite extraordinary. It is, rather like I felt about the Saturn V launches I saw in 1969: it’s something that every tax paying citizen (or J-1 Visa holder for that matter) should have a chance to witness. At the very least it gives you a profound sense of worth for all those horrible checks you wrote to the IRS, even when you realize that all the money you ever paid in all the years you paid taxes, put together, wouldn’t buy even one wing panel for the Shuttle. But think of it as yours and it becomes a little more friendly of an experience. 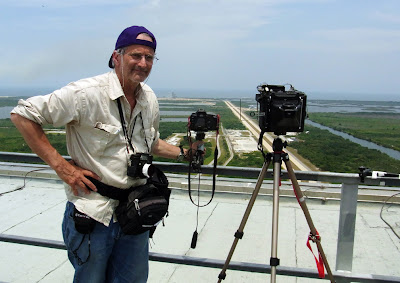 In 1969 while living in Miami, I covered the launches of Apollo X, XI and XII. It was the supreme moment of the space program. The Manned program had begun just 8 years before (think of it this way: George W Bush announces that we will go to the moon- 2001, and this year we actually DO it.) For those of you too young to remember John Kennedy maybe this helps put it into a time perspective. Yes, we designed and flew three systems concurrently, each adding to the knowledge of the next, but done with a combination of precision and energy which would appear very uncool today (Mercury/Atlas, Gemini/Titan, and Saturn/Apollo). Not only did they have cool names, but the stuff worked. There were no giant computers to run all the numbers. In fact the Apple or HP you are reading this on has infinitely more computing power than any of those capsules did. They got by with less, and made more of it. They knew they were taking chances, but they didn’t take stupid chances. It was most certainly a New Frontier. It was all being done the first time. There weren’t any books to read. They had to write the books. Engineers worked 80 hour weeks while their spouses (mostly wives.. in the 60s engineering was pretty much a ‘guy’ thing) bowled at the Rocket Lanes in Titusville. And when it finally came time to launch the rockets, we all waited with baited breath, unsure yet full of confidence that everyone along the way had done his/her job with dedication to the big task. 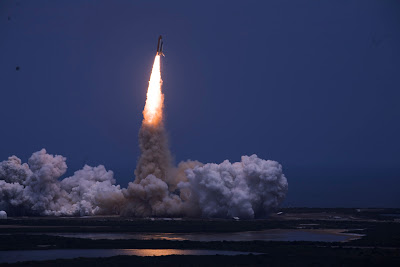 Now days I must say that I wonder if that same sense of purpose is there. The astronaut teams are still amazing, selfless, and ready to sacrifice. They are backed up by some great engineering folks. But the stories you hear about how things don’t get done quickly because of Union work rules, how simplification of tasks is derailed by a need to make sure a large number of political chits are cashed (read that as spreading the work around), and other stories which don’t tend to make headlines, and you wonder if the same verve which took us to the moon in 8 years, is still there. All bureaucracies, I well understand, eventually become most preoccupied with looking after their own survival, often to the detriment of the real mission. In this case, I think the bureaucracy has acted like it always does, and puts itself ahead of that amazing mission. 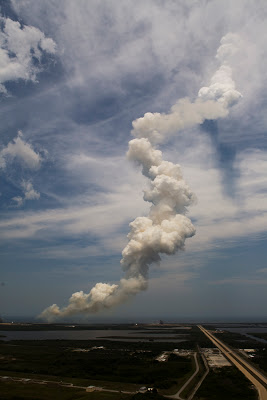 This week, the crew is going to do a final refurbishing of the wonderful Hubble Space Telescope, that fantastic toy which as given us the absolute most amazing views of our solar system and universe. There will be another few shuttle flights scattered over the next year, but I worry that as the shuttle goes offline, there will be not only a lack of hardware to take up the task, but a supreme lack of public interest in making the space program something of continued import. I think we have proven to ourselves that the fancier things get, the more our attentions are scattered, and if you don’t believe me, just watch a 22 year old constantly monitor his Blackberry for some supremely unimportant email which hasn’t arrived yet. It’s the ultimate picture of ennui, and yet if that same kind of ho hum attitude takes over our view of what the space program ought to be, then it will truly be a sad moment. Yet, watching and feeling the incredible noise of a launch, the remarkable speed of the ascent, the power that the hand of man has created, you don’t want something like that to end. We need to keep it going forward. And now, this piece will end in three, two, one, liftoff…. We’re just sayin’… David
Posted by Iris&David at 2:12 PM

Amen. I definitely hope to make it to KSC before the fleet is retired. Anxious to see the rest of your take. Thanks for all your hard work.

I never covered a space shot..but I'll bectha it's more exciting than El Dorado! Nice portrait, by the way.

David, You certainly put it in poetic perspective. I covered several Gemini and Apollo recoveries and a ton of shuttle launches and landings. It was an electric time where we cut the crap and got the job done. Now, as you wrote, I'm not sure we have the guts to reach for the stars. There was a time when we were willing to give a hero's welcome to Dr. von Braun and his cadre of scientists, fresh from a flight from Nazi Germany. All was forgiven! Now...

My that sure is a purple hat you got on backwards there David! Just curious, does the front have the letters L S U inscribed in gold?