Bolt, and I mean it!

I’m so pissed. I wrote 7 graphs (stupidly) using the AOL Mail writer, and just as we passed exit 15 it just did a big beach ball, waved goodbye, crashed, and took all my idiotic words with it. I’m on the Bolt Bus headed to New York. I had written a very almost witty account of taking the bus in the era of cutbacks (the “groovy” wifi/110v at every seat bus.) 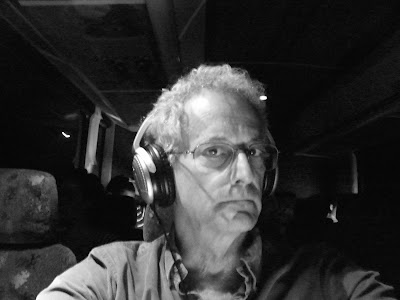 Your correspondent, in full BOLT Bus mode
In an era two generations gone from when the Greyhound passed through small town America, picking up young men and women and their duffel bags, and took them to the big cities, the arrival of the new bus system is quite timely. If you go to the Greyhound stations, you will probably still see primarily Loners and Families with Kids, and many bags, making their way to a new life somewhere. The Bolt Bus and the Mega bus, more narrowly aiming their business models at the alternative to short haul flights on busy routes (NY to Boston, Philly or DC) aim to provide that semi luxurious experience to a whole new kind of bus rider. 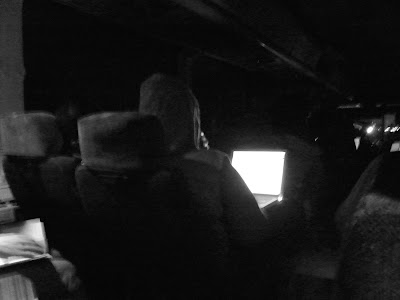 Two rows up from me, on the left is a young genX’er looking at Craigslist job opportunities while she has 4 or 5 iChat windows open. Just ahead of me on the right is a young man with the de rigeur George Clooney 3 day beard watching The Mummy on his wide screen Toshiba laptop. 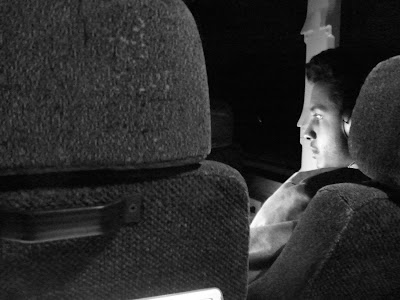 He is lit by the soft glow of that laptop screen, a common look on the bus. On the left, another 20something has put down her paperback (some few people actually READ) long enough to fill out an entry form for a marathon, and started reading through A Guide to Running. 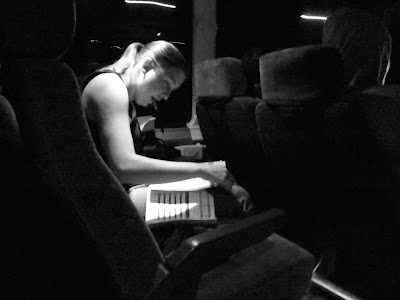 This is a self starter. She is someone you might think about hiring. Motivation is the most desparately lacking factor in hiring young people. Take it when you can find it.

I thought about my options when trying to determine how I’d come back to the City. Just as I was online ready to book this seat, I got an email from DELTA announcing new Walk Up fares for the shuttle, up to 60% off. How could I not see what that was about. Well of course, shuttle fees are so bad, that even at 60% off they are $170 one way (same price as Virgin America to San Francisco). So with cabs you’re looking at over two bills. The bus... with a cab to the metro is about $25. And it’s true, in the four + hours of the bus ride I could have flown to Missoula, Phoenix or the Azores. But at least I have had the chance to update my Facebook Page (wow, Dave that’s really worthwhile!), enter two photo contests, read several Photo magazines, and look at a few photo related sites on my laptop. I think I still prefer bus/train/plane to driving, since driving lets you do none of
the aforementioned Life-enhancing activities. But since there is no food served on the bus, you must bring your own vittles. (Note to food carts: someone should bring a first-class sandwich/plate lunch place to the 10th& G bus lot in DC. Money awaits you.) I took a few minutes at the deli near my local Metro stop to get an absolutely forgettable ham/swiss on a ciabatta. Now you would think that if they bothered to have ciabatta rolls, that they might actually care about the sandwich they’d make with it. Did I mention the limp lettuce? In the days of lousy sandwiches ( I guess those days still are amongst us) when it was easy to get a bad sandwich, you sort of expected nothing special. But it seems to me that at the moment you enter into CiabattaVille, the bar is raised. Considerably. You start throwing bread at me with Ci spelling, and pronounced CHEE-AH… it better be good. Slather something on there, maybe even a Secret Sauce. Tempt me. But don’t just litter the sandwich with two dorky slices of tomato and a wilted piece of lettuce that even a pet rabbit would hold his nose over, and expect me to be happy. If you are going to ride on the quasi-chic bus, there ought to be some way to complete the experience. No catering waiters are needed: we don’t need the old French train tradition of the little food cart on wheels, whistling up and down the aisle selling chips and gum. But it would be nice if there was an easier way of connecting a reasonable bus ride with a great sandwich. Nothing is more annoying than being the person across the aisle from the pastrami on rye with Russian, and not having a chance to partake of it. Not that pastrami is that easy to come by these days. A lot of places claim to have pastrami, but they would be, frankly, run out of Brooklyn if they tried to pawn the stuff off as authentic. So, hop on board, pretend you’re in the new century: use the wifi, plug in your cell fone charger… I’ll see you on the corner of 33rd and 7th. Next to Sbarros. Say, there’s an idea. Grab a stromboli and a Yoohoo. Your mileage may vary, but you will arrive. We’re just sayin’…David
Posted by Iris&David at 12:19 AM

You would think that Delta would figure passengers have an alternative, as the Bolt Bus..Geeeeeezz, a 60% mark-up as a 'walk-up' fee..And they wonder why people aren't flying! As I read your account, I could not help, but think about how interesting it is the true diversity you see when on a bus, although it's been a while since I had. Thanks for sharing.
I, too, entered a couple in a competition..Ahh, maybe I got a shot this time..