Whenever I arrive in a place where there are Presidential campaigns the first thing I do is visit the Headquarters offices because I think they are an accurate reflection of the campaigns. For example, in 1976 (yes when I took my dinosaur to work), a Boston reporter wrote a piece about the three leading campaigns – Harris, Udall and Bayh – Jimmy Carter wasn’t leading in Massachusetts. The article talked about how the Harris campaign had a million people, the Bayh campaign had incredible technology and the Udall campaign was using reverse directories. For all you young folks, reverse directories were the way you located likely voters without a great deal of technology. (If you knew the address, it would tell you who lived there.) It showed ingenuity, something on which we were not short and without money of which we were. The Udall campaign was friendly and welcoming and we had lots of volunteers and unfortunately fewer voters. 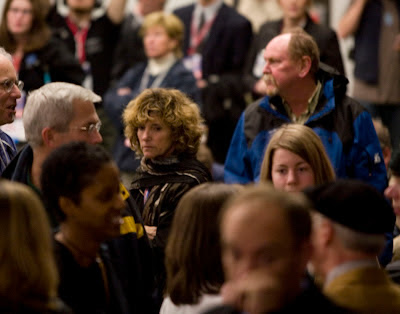 Your Correspondent at a Hillary rally, election eve, Manchester, NH
In 1984, if you visited the Hart campaign you would find a great many volunteers, the tables covered with used coffee cups, old donuts and empty pizza cartons. It looked like a campaign should look. The Mondale headquarters looked like a business office. It was not an inviting place to work or learn about your government to be.

We are in New Hampshire looking at all the candidates. We have visited many HQ’s because, as I said, I like to get a feel for the campaigns. The people in the Hillary Headquarters are a bit suspect of strangers. The Edwards people are nicer. The Obama people have figured out how to use volunteers – rather than ask for donations and the Kucinich people – well to be honest, I can’t find their HQ.

The first night we were here we went to the debate. ABC and Charlie Gibson did a terrific job. The host St. Anselms College did their best. There were was a bit of confusion, as is always the case, with credentials. And there were lots of answers to questions that I didn’t fully understand. However, I must admit that my favorite answer to any inquiry was when David, who was shooting for “People” asked to be in the pool and was told No. I asked who made the decision about Pool positions and was told, there is no one making the decisions. OK it’s politics but I suggested that a local reporter for a NH publication was probably not as good for national ABC as the shooter who was working for “People”—the only magazine anyone reads anymore, I think. Anyway, there was no one making decisions so David didn’t get into the pool which was irrelevant since they didn’t let the pool stay in the debate. And the one real moment, when all the candidates were pointing and trying to get Charlie to call on them, was not recorded- except by ABC video. That being said—ABC was a terrifc host and Charlie (on my list of all time favorite TV personalities) was just a class act.

On Sunday morning we went to an Obama event. Here is where I have to confess that I am one of the worlds great cynics. I am so cynical that calling me skeptical is almost like saying I am “glass half full”. Anyway, I was prepared to think he was a good speaker but without much heart to support the mouth. In addition I have perceived him as a Gary Hart-like candidate. One who is comfortable with what he says but not with touching the audience. Like after each speech he appeared to flee so as not to have too shake to many hands or answer any questions. And the ‘change stuff’ truly gets on my nerves. The Democrats are fighting about who wants the most change, can change, is the agent of change, and carries enormous amounts of change. But by the end of the event I felt that Obama was the ‘us’ we used to be. He was both inspirational and sensible. He mostly talked about hope. He announced that he refused to have anyone try to take his hope away. He said that some people wanted him to be more seasoned—to stew the hope right out of him, but that was not going to happen. This was probably a carefully choreographed speech and even the moment I liked best –when he called his state coordinator Jack Shapiro up to the stage he said that Jack had worked very hard to get everyone in the audience to vote for him. Then he put his arm around Jack and asked everyone who was undecided to raise their hands. Then he instructed this energetic talented young man to “go get um”. It was a way to thank Jack and to express his confidence in Jack’s ability. Too many politicians never say “thanks” so it was a special and noteworthy moment.

In the afternoon we went to an Edwards event where they produced the family of Nataline—the young woman who died because Cigna Insurance wouldn’t Ok a liver transplant—until it was too late and she died. Additionally, there was a middle aged man who had a cleft palate and couldn’t speak for 50 years because he had no health care. It was supposed to be a moving moment but it was soppy and disturbing. Touching your heart with a story has to be more intimate. It is a strategy that is intrusive and uncomfortable. Edwards says he will battle the insurance companies, he did it successfully as a trial lawyer and he will do it again as the President. But, in a way, it diminishes the importance of what a President should be.

We finished the day at a Ron Paul protest about being excluded from the Fox Republican debate. It was hardly as interesting as Dennis Kucinich saying, in an interview, that he wanted Ron Paul to be his vice president. Talk about reasons not to take candidates seriously.

There is no other state quite as interesting as New Hampshire is when it comes to Presidential politics. It is, unlike Iowa, where military personnel serving elsewhere and invalids who can’t attend a caucus, a place where independents can declare right before they vote, and everyone in the state has seen all the candidates up close and very personal. Sure there are whacko’s running for office – like a guy named Vermin Supreme 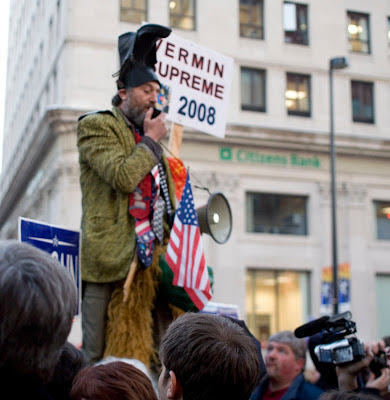 who wears a rubber boot on his head, or the guy who dresses trash and yells, “have I been elected yet”? But it is also a place where you can walk up and ask a person running for this important office, how some decision they make will impact on your life. It is the last time you will be able to judge a candidate without having to do it in some high priced media campaign— it is invaluable. It is New Hampshire. We’re just sayin...Iris
Posted by Iris&David at 1:24 AM

Live Free, or choke on a donut.

Why can't the last be first? I say next time let Hawaii be the test state. Too much snow and ice influencing people's choice.

Wow, I was going to vote for Kucinich but now I think I'll go for Vermin Supreme. Think he'll have a chance against Romney in the national?

Christian, I don't think there is anyone who stands a better chance!