But I Love My Car

How does an older person deal with the loss of independence? Yesterday, David and his brother Tom had a conversation with their mother about giving up driving. She is about to be 90 and still in good shape but there is a bit of short term memory loss, hearing and her response time is not where it was—whose is? This ‘no more driving’ discussion is one of the most difficult a child can have with a parent. I had it with my mom shortly after her big ole Taurus became intimate with two parking meters, and right after she took the mirror off the right side of the vehicle when she was pulling into the garage. Jordan, Devin and Alex came racing up the steps to give report of the disaster, and to indicate that they were never going to ride with her again because it was too frightening.

Going from “driving “to “not driving” was a terrible transition. First of all, her neurologist thought it was OK for her to drive short distances—which is where most accidents happen. So not only did I need to contend with her stubbornness but with a report from a medical professional indicating I was wrong. I think I mentioned to the doctor that I thought it would be a good idea for her to drive with Mom before the diagnosis but she refused so I was left with having to insist I was right and the doctor was wrong—not a confrontation one wants to have with a Jewish mother. We argued but she continued to drive until she had, what we fondly refer to, as another pause. That’s when for at least a few minutes, she blacked out. Did I mention that is why we went to the neurologist? Anyway, after she was rushed to the hospital because her neighbor found her on the kitchen floor, I hired a person to live in with her and drive her everywhere. So I thought she would thank me for saving her life, but instead she still blames me for taking away her independence. “If I was still driving” she says even today when she can hardly get around using her walker, “I would be fine”. 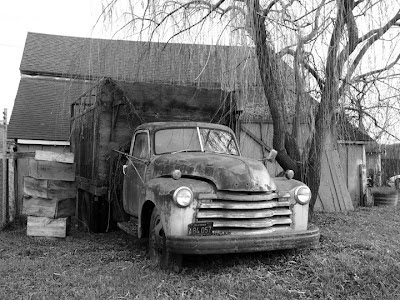 A Napa valley truck, no longer driven
My guess is that there are millions of progeny in the same place. Certainly David and Tom were there yesterday. They were absolutely reasoned in their approach, having strategized about it for much too long. They thought the legal approach was the best route to success. “Mom” they explained, “You are driving with an illegal Utah license (she lives in California) so if you get in an accident you are liable and could well lose everything. And they went on... “Mom you’ve always been ahead of the curve, moving from one place to another when you knew your life was about to change.” And “Mom you don’t need to drive because at your independent living facility they provide a service to take you anywhere you want to go.” And she said “OK, I get it but I just had it washed and it looks so clean.” And, “Well, what if I were to take the California test so that I would be a legal driver?” Parents hear only what they want—that goes for all of us. Ultimately they will have to deal with her straight on. Something like “look Mom, either you are going to kill someone or you will get killed and we’re rooting for the latter so we don’t have to deal with the mess.”

Somewhere in the 1970’s my uncle, who had several heart attacks but seemed in OK shape, gave up his license because he had, unbeknownst to any of us, short term memory loss. One day, when he was gone for many hours, we were concerned and went out to look for him. We found him in a parking lot in tears. First he had parked the car and forgotten where he parked it and then, after he located it, he couldn’t remember how to get home. It was horrible to have to tell him he couldn’t drive anymore, but he was so frightened about what had happened to him, that he reluctantly agreed. And I’m not sure which was more difficult, telling him he couldn’t drive or seeing this brave and wonderful, always a hero to us bigger than life personality, as a weeping, frightened, fragile older person.

We all know that what we are doing is right and we all know that our decisions are made for both ours, and the public good, but so what. Our folks have always depended on their cars, in part because they didn’t want to depend on us—or anyone else. Then we come to them and calmly say, “You can no longer do what you have done for the last seventy years. Oh no, you must give it up without any warning and before you create some kind of tragedy.” This one act says more to them than “it’s dangerous, you can’t drive” It says, you are old and we are now making the decisions for you that, although you have made all your life, you just can’t be trusted to make anymore.

I remember a few years ago when I got a ticket for speeding. I’m sure it was not my fault. It must have been the speedometer. It was expensive and inconvenient because, in order to avoid points on my license, I had to hire a lawyer and pay a big fine. And when my license expired I had to retake the “test”. I studied for days and even then it was not easy to pass. When I went to the Virginia department of motor vehicles and saw the people who were supposedly competent to drive, it was horrifying. Most of them didn’t speak any English, so they took the test in Spanish, but as in many states, the traffic signs are not international symbols nor are they in other languages. How, I thought, are these people going to be able to navigate in the US. When we took my Mom to get her non-driver’s id—so she could get on a plane—she was in a wheel chair and could hardly stand and they actually asked if she wanted to take the driver’s test. Both of these examples are illustrative of the fact that it’s America so anyone is free to do anything. But wouldn’t it be nice if there was a driving Gestapo to monitor who should really be behind the wheel and who, upon receiving a call from a desperate child, would immediately find the parent, rip up their license, take their keys and list the car in the classifieds. We’re just sayin....Iris
Posted by Iris&David at 7:08 PM