Then there is the 'other' September 11 -- the coup d'etat in Chile in 1973 when the Chilean military (backed in no small regard by Nixon & Kissinger) ousted President Salvador Allende. I was on the first plane out of NY headed south that night, having just returned a couple of days before from Paris. It was the early days of my working for GAMMA (then being led by Raymond Depardon) and no story was too far away or too distant a topic to cover. I'd been in Paris the week before, and answered the fone from Chas Gerretsen, the GAMMA photographer who'd been living in Santiago for months, advising us of a bad day in the street, and that his film was headed to Europe. So Chile was already in the back of my mind that morning when we heard that Chilean Air Force planes had bombed the Presidential Palace. It was still the world of 16mm cine film, and 35mm Tri-x, so nothing was instantaneous, but required time to process and print. The man who had been the Chilean Ambassador to the UN, Gabriel Valdez, was on that Braniff flight leaving JFK, and the early word (wrong , of course) was that he might be the new man chosen to take over the Presidency. We made a few pics of him in First Class as he sat uncomfortably, and in Miami, dropped that film, even as new journos hopped on the plane. Joining there was the venerable Bob Sherman, a freelancer from Miami who I ended up sharing a room with for two weeks at the Sheraton Carrera when we finally made it into Chile. 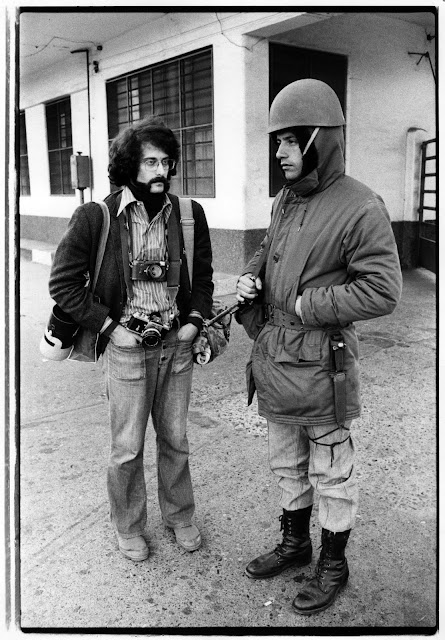 We were in fact supposed to fly to Santiago, but the Junta had closed all flights in and out of the country for what turned out to be almost a week. Diverted to Buenos Aires, we spent each day trying to figure out just how to get into Chile, and only after six days of nail biting was the first flight permitted in - a Press charter full of writers, photographers and tv cameramen. The airport was essentially closed, and we had to unload the bags off the 707 ourselves, and since there were as yet no taxis, we found a dump truck and a bunch of us climbed into the bed in the back...Rolling through the town at dawn, quiet smokey streets greeting us along the way, we made our way to the Carrera, which is in the same square as the Moneda, the Presidential Palace. As we turned the last corner into the square, the late Bill Montalbano, a very suave and savvy Miami Herald correspondent, who knew the place well, just sighed, "...this is gonna be something...." And seeing the bomb damage and bullet holes.... it was. This picture was made later that day by Bob Sherman - and for the life of me, I cannot understand how I went into a world of a right-wing anti-"extremista" junta looking like this. I was just turned 27 and like a lot of young photographers, I suppose I thought I knew best. But I'm just glad I was able to do my work, and aside from being arrested a few times, able to get my film back to the office. Forty two years later, it all seems so fresh.  We're just sayin'...  David
Posted by Iris&David at 9:58 PM