Birthdays are of course given to relative levels of celebration. Nothing is cooler than being 5 or 6.. being able to blow out the candles in one big breath, all your kindergarten pals gathered around for cake. Later, it starts to take on slightly iffier connotation. One of the very few times my mom ever embarassed me was my 13th birthday. (That would have been 1959, and I suspect I was more concerned with the state of the Juno II moon probe attempts than the type of cake.) But as I blew out the candles, now surrounded by a pack of 8th graders, she announced... with nothing intended but love and admiration... "well, I guess that officially makes you a teen-aged teen-Ager!" I did secretly groan... but as I was to find out, there are worse things than your mom extolling your wonderment. The least fun birthdays are usually the ones on the road, solo... in some place that might have been good for a story, or even for pictures, but which after hours kind of turned into a not terribly fun place to be. 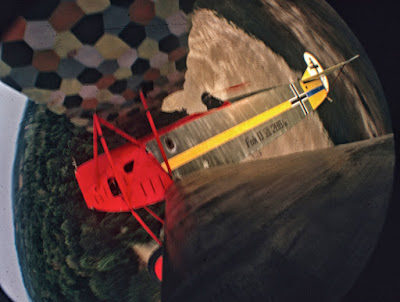 This picture, taken at Cole Palen's Old Rhinebeck Aerodrome, was shot the week I turned 24, in 1970, just a couple of weeks before I left for Saigon the first time. Even then I was trying some wacky stuff out.. this was a Spiratone screwon fisheye lens adapter, which you screwed into the front element of your 50mm, and pretended it was really a fish eye. I had seen a story in the TIMES (and I still remember the picture by Wm. Sauro, of the TIMES staff) and for a guy who grew up loving airplanes, both models and full size, it was a place I had to be. I spent a day at the Aerodrome, flew one or two missions in their camera plane, and wired this Fokker D Vii with my Nikon on the outer strut. And for once, Ed, "that Fokker was actually a Fokker!" I even tried to see if I could talk LIFE into assigning me the story.. ..but in the end, off I went to Vietnam, leaving the LIFE story to my pal John Olson. He was much better at attaching cameras to places they didn't belong, and eventually had a 4 or 5 page story on the old planes. I went back to the Aerodrome a year ago, and it has grown immensely - some 60 beautiful antique planes, though they just had a fire at their gift shop, and will be doing a fund raiser next week to try and rebuild it. If you like planes, especially planes that are made out of baling wire and canvas, the Old Rhinebeck Aerodrome is worth a trip. They still do the hokey stuff with Snidely Whiplash and Miss Kitty (the names have been changed to protect the innocent) but above all, you get to hear the sound of rotary engines, a sound which was designed a hundred years ago, and pretty much died out about 80 years ago. There is no sound like it.. the engines doing On/Off to act as throttle (there is no throttle... just On, or Off).. as they touch down at the end of a flight. It almost sounds like a kid getting ready to blow the candles out. We're just sayin'... David
Posted by Iris&David at 8:53 AM