Life: A Bowl of Soup

Is the testing period over? Well, it’s never really over, it’s just delayed. I knew that. But there are days, and today is one of them, when it SEEMS the testing is over. That long, makeyououtofbreath winter snow storm day watch, the ones the Weathermen go bonkers about to remind you that Snowmegeddon is Near, that kind of day which you makes you wonder if you will ever see the sun again, is briefly banished, to let us feel the faintest of today’s warm breezes. That cold day is over. Today in DC it is just beautiful. Spring-like, dare I say. You can wear a moderately heavy coat, but you don’t need to. All of a sudden you’re wandering around looking like the Michelin Tire man, shoulders and arms all puffy and plump. You realize the simple little jeans jacket would have done the trick. Those are the kind of moments which make you feel that spring might be on the radar, if not yet upon us. There are still a few large pyramids of ice encrusted snow in the back yard and the north side of the house which gets no sunlight. It makes you understand how in the days before refrigeration, a well marshalled hunk of snow and ice could have helped keep that slaughtered buffalo meat a little longer in the basement.
‘
I do feel like the northeast was tested this winter. Lots of cold, lots of snow, and lots of – inspite of all the bellowing weathermen – surprizes. Having grown up in multiple-feet-at-a-time Utah snow, I always was shocked and dismayed at how the capital of the Free World (their title, not mine) was so ready to succumb to a mild flurry as if it were the Black Plague, itself. Deserted streets, untended schools. Food stripped from grocers’ shelves. This was always what happened when one of the little storms would drop a couple of inches of snow on the DC area. In Rochester, you would have been ashamed to react so meekly. But here, it was always the way... make a run on the grocery stores...because there is no food left in America. And get ready to stay home for days at a time because – so goes the thinking -- unlike every winter for the last 300 years, there will be a snowstorm. The relief from that kind of “woe is me” panic which grips this town is palpable, and today I saw the actual proof of it. 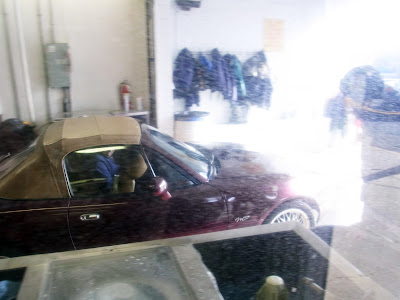 The carwash on Glebe Road was open, and cars were lined out two blocks waiting to get in. A clean car in the post salt-and-sand storm environment is a joy to behold. And it remains one of those reminders of how this country has changed so much in a generation. As you pull into line, an “all-business, no guff’ Latina takes your order, writes a symbol on the car windshield denoting Silver/Gold/Platinum service, and as the car makes its way down the washeria, you go inside, pay an Ethiopian woman on the cash counter, take your receipt and hand it to the Salvadorean crew chief (of ‘last step’ hand driers), and then hop in your car, and away you go. This, after a modest lunch of spring rolls (steamed not fried) and a bowl of wonderful Phø at the Tay Ho Vietnamese soupeteria. Where half the clients are Asian, half Latino, and a few native English speakers like myself. It truly is a melting pot wherein the pot contains a soup which is sublime. 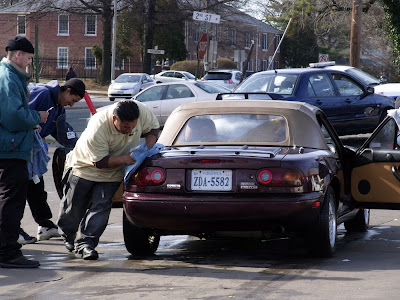 Last night I attended a dinner downtown with nearly two dozen former Vietnam War reporters. Most of us had fallen into other more modern aspects of our lives, yet all retained a certain fondness for Vietnam, and perhaps its people, and our own lives, as they were lived there. Just a year ago, one of the more colorful members of this group, a no – bullshit Dutch photographer named Hugh Van Es, had a cerebral hemorrage, and was taken to hospital in Hong Kong, his home since the end of the war. As he lay several days dying in his bed, messages about him, wishes to his wife Annie, his medical status updates, and maybe most importantly stories about him began to circulate amongst a small group of reporter friends. That small group kept growing on the internet, the way the internet does those things, and within a few days, almost 300 people were sharing their memories of Hugh (all you need to know is that he had his own stool at the Foreign Correspondents Club bar in Hong Kong. That and the fact that amongst the many fine pictures he did, was the photograph of the last helicopter on the roof of the apartment building, the one everyone knows, that final gasp of indignity, as the US officially departed Saigon) After he passed away, all these newly rediscovered friends ended up on a Google group bulletin board. It remains a wonderful venue for speaking about lost friends, issues during the war, and sometimes how Vietnam does or doesn’t engender parallels to Iraq and Afghanistan. The board has taken on a life of its own, moderated by a former AP reporter living in Sydney, and it remains one of those modern day online wonders. In the era of blogs and very little reporting of the old style, this group of journos remains the last real bastion of true journalistic reporting. Next month will be the 35th anniversary of the fall of Phnom Penh and Saigon. The “end” of the wars in Indochina (not really, but for the Americans anyway.) There will be a large contingent of former reporters (the group is aptly called “Vietnam Old Hacks...”) who will gather in both capitals to meet old friends, and no doubt ponder what the worlds of Cambodia and Vietnam are like, 35 years later. Would that in 2045 we will all have a pleasant four day stay in Baghdad, or Kabul, sitting in small cafes, nibbling on honey-drizzled sweets, and remembering what the “oughts” and “teens” were like. Last night in DC a small contingent of that group gathered for dinner, most of us for one reason or another unable to attend the April reunions in Asia. There were a few well known scribes (Bernie Kalb/CBS and Richard Pyle/AP) as well a number of folks I had never met there – they all having worked in Vietnam years before or after I did. But as Bernie Kalb so sublimely put it, “..my DNA is powerfully filled with Vietnam. I dont let go of Vietnam, and Vietnam does not let go of me...” (Here is a little video of everyone introducing themselves last night..)

That wonderful lunch that I partook of today, those amazing Vietnamese rice noodles in the world’s greatest broth might never have existed had we not had all the twists, turns, tragedies and sadness of the War. Perhaps the families who settled here, opened soup cafes, and raised their kids as the archetypal “new” Americans, would have been able to somehow maintain a life in the Vietnam of the 70s. The war had a lot of after effects, not the least of which are the hundreds of little cafes which now dot the American landscape, and which provide a place to sit for an hour or so, and savor something so simple as a bowl of soup. I’m sorry for the war, for all the killing and destruction of a culture that took place. But I’m not sorry that in it’s aftermath a new generation of Americans includes the kids of those Vietnamese expats. And on a spring day like this marvelous Sunday, as we all try and ponder where we’re going I feel the gift of their arrival here. 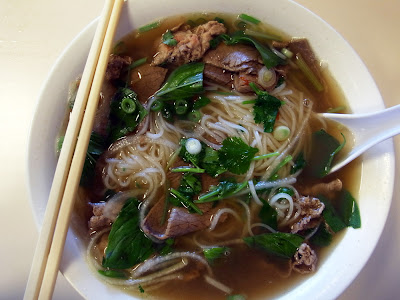 Vietnam - I often ponder how one year of my life can take on such dis-proportion. I would like to see it again, without the bullets and bombs. As for Iraq and Afghanistan, I fear history will not be too kind concerning our endeavors there.Photo and print journalists from the post WW2 era told us about the end of the British Empire, yet we continue to make the same mistakes.
Reeder