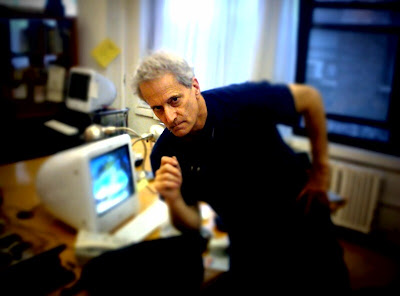 DB by Dustin Ross/Contact (iPhone and some wacko kewl software)

Don’t look back. They are definitely gaining, no ifs, ands, buts or maybes. This is the weekend of the PhotoPlus exhibition at the Javits Center in New York. It you like cameras or dig anything to do with photography, then this is the “Santa’s Workshop” of the photo crowd. All the new announcements by the big companies are timed for one or another show similar to this one, and this year I’m sure will be no exception. Canon and Nikon, the big dogs are doing their collective things, but the way things are evolving, the fact is that software and ‘post’ production products are becoming as big a deal as the “taking” end of things. So now it’s not just a question of having a D3x or a 1D Mark 4. At one time (a few years ago, before digital took over the known world) your average photog would have loved nothing better than a new box in which to shoot tri-x or Velvia. In fact one of the great ironies of the ‘digital age’ is that at the time when 35mm film cameras were achieving the ultimate in speed, quality, and useability, an incredibly expensive, not very capable digi cam became the king. The one thing it could do was send a picture NOW. And NOW is what it was all about for those in the press. Now, a decade later the emphasis now seems to follow the “processing” side of the creative process. We have turned “photoshop,” the name of a wonderful and very capable editing program, into a concept, a view of photography which now assumes (“ah.. he must have photoshopped that!”) that far from being true, most pictures are suspect from the moment they are made, as to what they actually represent. I’m sure there are a few post-hippie types who would be able to tell me about what its like to trip on LSD, that festival of color and light. (I was always afraid of getting caught.) I suppose it probably looked, occasionally, like an overdone HDR picture (High Dynamic Resolution.) HDR is one of those processes which were originated to try and get photographs to more correctly replicate the human eye. It attempted to capture not only the shadows of s scene (the dark bits..) but the highlights, too, and everything in betwixt and between. We are used to looking at pictures which have come to look rather like how our eyes see the world. The new cameras go well beyond that range, and when you use an HDR workflow (isn’t that a sexy word?) it brings out all the detail in both the darkened shadows, and the bright highlights. God help you if the world really looks like that. But it is a “look” and one which can indeed be very eye catching. Sam Kittner, a Washington photographer has created a stunning set of HDR panoramas, of mostly DC subjects.

photo: Sam Kittner (kittner.com)
They arrest your view, and make you want to linger as you look. It’s as if we have taken photography and made a new painterly tool out of it. As someone who spent most of his life in the documentary/photojournalism world, I find myself torn: on the one hand there is something very captivating (or potentially so, when well done) and at the same time bothersome that we are messin’ around with ‘reality’ a bit too much. Of course you could also say that a 600mm lens with its sense of compression, creates a view of the world which is nothing like what you can see with your own eyes. In essence, it is an extension of that eye, a funneling of the vision into a very small cone, isolating the areas around it.

I’m actually glad the rules exist (such as they do) for my kind of work. It’s not that I don’t have a fanciful notion now and then to blast a picture with the latest software grooviness, and see what it yields. Certainly if you’re working in the realm of commercial or strictly artistic photography, pretty much anything goes. But at times it’s tough to turn that “Honest view of what I see” button on and off. I have often, however, loved quoting Bullwinkle, who was once portrayed in a smock and beret, with a palette of paints and canvas at hand: “I paint what I see…. And THIS is what I see…” camera panning to an absolutely incomprehensible Kandinsky-like bowl of artistic mush. Well, I DO shoot what I see. But it’s what happens to those images afterwards which is changing the world of visual communication as we know it. Credibility is often lost as pictures which were cheated along the way chip away at the essential believability of every image. I guess I am over that, already. I mean, who actually believes what they see anymore? The latest thing to pop me in the head is the software version of a photo techique which I have been working with for a few years. Using a lens which is slightly angled to the film plane (or the chip plane) you can create certain narrow fields of focus which basically let you emphasize what you want your viewer to see. Well, you could, I suppose say that this is as unreal a representation as something “done in post…” Maybe.. but I still feel there is something a little more holy about what we do in the camera. That may eventually lead to some wonderful little things which you can do to your camera, adjustments which would give you some other kind of ‘creative’ way of putting that image onto a chip. Today, Dustin Ross, the digital whiz kid at Contact wow’ed me with the new “Tilt Shift” program on his iPhone. Damn… its amazing what they can stuff into something the size of a ½ pack of smokes. In a few seconds he shot the picture, pulled it out of his “photo album,” worked it for all of about 30 seconds, and then emailed me the picture. Had I just dropped in from say, 1978, and seen that, my jaw would have dropped to my sneakers. We are already becoming so blasé about these amazing new tricks, that they have to keep getting reinvented, every month or two, just to keep one’s attention. I worry long term about the ability of the free press to exist, and should it exist, and maintain some modest level of credibility from the public. And of course there will always be questions about manipulation of images in ways which potentially go from creative artistry to propaganda. Wouldn’t those guys who spent their careers taking people out of Stalin and Mao’s pictures have had a field day with this stuff.

The only thing we know is that it’s not going back to those simple days of Velvia and Tri-x. But meanwhile, have a great time at the PhotoPlus show, push it one stop, and call me in the morning….We’re just sayin’… David
Posted by Iris&David at 10:46 PM

Now there's no need for your tired old Graflex. Just upload your image here, adjust the parameters and download your tilt/shift image. Besides, I have a lovely retirement home here in CA for your beloved 4x5 camera. I'll take her to the beach every day I swear.