Now THIS Is News

Don’t you love it when the issues of the day are so ridiculous that they provide entertainment rather than worry. When you can reflect in the realm of stupid rather than the reality of the economy and the war –wherever it is now. Such was the case this week with Obama’s trip to meet with the Olympic Committee, (who, anyone that has ever dealt with them knows, they are corrupt and obscene). And the Letterman revelations about having slept with a number of women who worked for him. These are so good, I hardly know where to start. 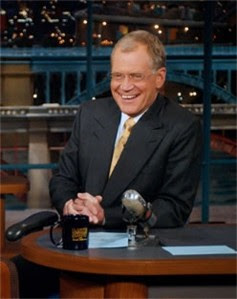 Let’s first talk about the President and why he made the pilgrimage to Copenhagen. I wish I had known he was going because my boyfriend from third grade lives there and would have given him a more genuine welcome. Never mind, maybe they’ll meet some other time. My guess is that the Olympic committee, having received more payoffs from Rio, had made their decision well in advance of the President’s arrival. So the trip was a waste of time, except to provide fodder for the right wing and additionally, humiliate the President (who happens to be an American regardless of what you’ve heard) because no one really likes Americans anymore. At least they are not supposed to on TV.

My only objection to the trip was that he is the President of the United States and not the Senator from Illinois anymore. He needs to be perceived as having a world view, rather than advocating for his home state. Some would say that the Olympics are an important world event. This is true. I doubt however, that he would of made the trip if Fargo, N.D. was vying for that sport’s prize. I could be wrong, but not usually.

The fact that Chicago was at the bottom of the list is no surprise and moot. The facilities available right now could not compare to the other places. They would have had to rebuild the city (it’s a livable wonderful city now), which is easy in Beijing, because you just tell people to pack and go, but which is certainly never going to happen in an American city – unless there is a hurricane or an earthquake. I just wish the White House “thinkers”, would stop thinking photo op and start thinking about what makes sense in terms of the President’s time.

On to Letterman. Let’s be honest. Who really cares about who Letterman slept with. I wanted to hear juicier, maybe even perverted stuff. In these times of “get over it”, when our elected officials are unfaithful, who cares about consensual sex. And what was this totally stupid CBS producer thinking? Why would you try to blackmail a celebrity with nothing to blackmail them about. You can be sure if Letterman had done anything unforgivable, like raping a thirteen year old girl, he would have paid the guy big bucks. (I also love that this was the third most important story of the week and I’m sure there will be more to come.

While the economy is in the toilet (despite the good PR), and there were more job losses this month again, and the health “care” issue seems to be on the back burner or, at least, not on the front page of every newspaper in the country, it is almost a relief to read and hear about stuff that is truly entertainment, rather than pretending it’s news disguised as entertaining. We’re just sayin’.. Iris
Posted by Iris&David at 5:02 PM

While PJ's seems to be having difficulty getting media outlets to hire a professional PJ due to cost, just think of the money spent on Letterman's spin-cast. Now you could argue it's already sunk cost, but really WHO CARES! He's just another man who can't keep his dick in his pants. Wow big news there. That's NEVER happened before. The entire concept of celebrity disgusts me. It use to be a person became well known due to their works and or accomplishments. Now all you have to do is whip out your penis or spread your legs and have 8 kids.

I think those Vets that retreated to the hills in Hawaii after VN had it figured out. Our society, is it worth saving? Does anyone really care? Will anyone even read this?

Love your blob. I have to admit I first came to it because of David but I found not one but two intelligent sensitive human beings. Keep it up.

Nowhere near the 30 magaton thermo-nuclear hydrogen warhead that you dropped on John Edwards!

You sure have mellowed since your guy won...

I like your blogs too. David's book (44 Days) came yesterday - I finished it this am. Great work!!
Reeder

Gee Belles Dad,
I think being out of politics (now a Broadway producer), has done wonders for my disposition.