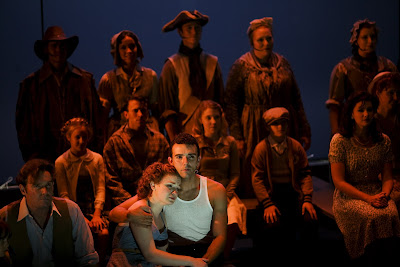 If you were going to invest your time, or dare I say money, in a unique new musical, I would bet on Michael Holland’s “Hurricane” now at St. Clement’s theater, as part of the New York Musical Festival. The subject of the show is the 1938 freak hurricane that decimated parts of Long Island and Connecticut, and totally destroyed Napatree, Rhode Island. 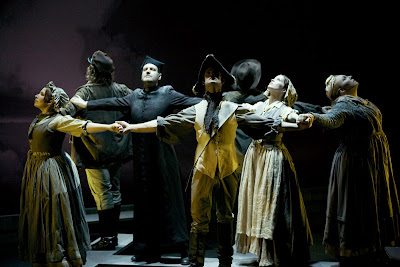 The book is an intricate series of personal stories about the people who lived and died during the storm. It is surprisingly easy to follow the story lines, despite the complexity of the people and their relationships. And the music is quite simply gorgeous and extraordinary.

The simplicity of the set combined with exquisite costuming all help to enhance what are already authentic and stellar performances by a gifted ensemble cast. And despite the opening night technical glitches, the combination of words music and talent show provided the audience with an overall incredibly moving experience.

But don’t just take my word for it. Mike Cohen of the Public Theater said:

“HURRICANE's serious intent and high aspiration and musical complexity...?
I thought the performance as is communicated extraordinarily.

The choral work was stunning -- musical direction and the young man at the
piano were tremendous -- and I remain particularly haunted by "Norm's"
character and performance and the delivery of his numbers (I don't have
the program at hand right now. The actor's last name was Watt(s), I
think...?) His soldier solo and Boogeyman song and his handling of the
musical/dramatic scenes re: the loss and death of the children was
particularly moving and memorable, I thought/felt. Among many other
moments, of course.

I'm already looking forward to seeing the piece again in the future -- I
have no doubt it will have one -- and can't wait to see how it continues
to grow and develop.”

Well known producer, Ken Davenport, who has yet to see the show said:

“Hurricane has almost 30 castmembers. I often tell festival producers to produce small shows, because they come off better. Well, in true "embrace your flaw" fashion, the Hurricane producers have come out saying they are proud to present a show with "the biggest cast ever seen on a NYMF stage." There are Broadway vets, kids, and even a couple of ghosts. Oh, and I've gotten three unsolicited recommendations to see this show. There's some sort of storm brewing . . . and I want to see what it is.”

Yes, there is a buzz about this storm. The show, which was to have 6 performances, added two additional shows and still the entire run is sold out. Let’s hope it has life beyond NYMF, so many people can share the experience. This definitely gets a Sadie 3.
For more info http://www.hurricanethemusical.com