Over the last few weeks I have received, via the internet, some of the most moving, articulate, sensible, smart, clever, comprehensive, and substantive, pieces of information about the election. Most of them were about why we should vote for Obama. Some of them skewered Palin, some addressed issues of deceit in McCain advertising, and many restated the close connection between McCain and the President as well as the fact that McCain is totally out of touch.

When I read the e-mails I am heartened by the interest in the election but I am concerned about all the talk rather than action. It’s like all the Democrats are talking to themselves. And after the conversation finishes, what do they do about winning the election? I don’t have a concrete answer (except going out on the street with a Harry Truman Truth Squad) but I know it has to be more than talk.

There are three issues that I think resonate with the public – the economy, health care and the war. It’s funny to use the word resonate when what I actually mean is they make people have a range of feelings anywhere from helpless to confused to frustrated to incredibly angry. What I don’t understand is why people aren’t out on the streets screaming about the state of the nation. I get why kids aren’t protesting the war—it’s not immediate for them. I think if there were a draft, there would be serious protests. But alas, there’s no danger of that in the near future— unless McCain is elected and we use up all the people who are presently fighting somewhere. There’s nothing he wants to do more than have a war. It’s who he is. He can’t help it. He was born, grew up and lived a military existence – there is no other way for him. And Sarah Palin—his new mirror image wants to go to war with Russia and Iran and probably Aruba. But why isn’t there a mother’s march, a women’s march, a workers' march, and “I lost my home” march. Talk about a Harry Truman Truth Squad – what is more truthful than the possibility and reality of all the impending losses.

Back to talking to ourselves. We e-mail, we text, and send youTube video. It’s non stop and repetitive. It seems a waste of time because we are not reaching the undecided. But look at what’s gone on. At first Palin was a bad joke. Even I wrote that I thought it was a sign that McCain didn’t want to be President. Then the Republican machine went into action and she became a serious if not critical part of the ticket. Then her kid got pregnant (or news of it leaked out), she talked to Charlie and an investigation about improper conduct threw a big fat fly in the political ointment. So the machine worked overtime and accused the media of disrespecting her – they had the nerve to ask pertinent questions about her qualifications. Shame on them. Then there was talk that the investigation was too political and she wasn’t going to cooperate, maybe she did support the Bridge to Nowhere before she didn’t, but she sent her kid off to Iraq on 9/11 and weren’t the Towers more important more important than a silly bridge.

Last week things were terrible and the twins, McCain and Palin were riding high. Who cares if Sarah dismisses all the gains women have made over the years and who cares if McCain thinks the economy is just fine – well maybe not. Who cares if he voted for the legislation that produced this crisis. Who cares if he is out of touch. People like them. They are the new cutest couple. And Obama was virtually invisible—except for the e-mails and concerns expressed by the media and the public about why he wasn’t fighting back. So then the Obama campaign released a few commercials and Obama made some speeches and had lunch with Bill Clinton who said as soon as he finished his Foundation work (sometime in the next century) he would go out on the road for Obama. Whatever could the Obama people have done to the Clintons to cause such distain? Wish I had that to gossip about.

Moving on to this week. Things are looking less bleak. Despite the fact that McCain is up in the polls (isn’t the polling mostly by phone and isn’t it possible that people with cell phones -- all the kids -- have never been asked to participate) that people are actually starting to question what he says today, as compared with what he said yesterday or years ago and now there is some question about who this Governor from Alaska really is. Maybe the “I want to have a beer with him/her” reason to vote for the leader of the nation, is not working as well as it did in 2000. We’re still talking to one another but the tone is a little more optimistic and the questions are coming fast and furiously. 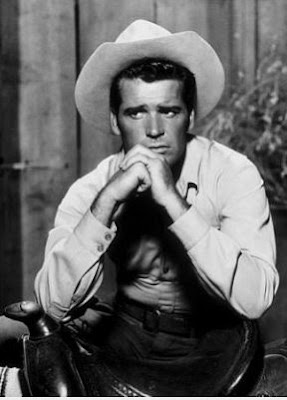 the Real First Maverick...Bret
And speaking of questions, don’t you think James Garner (use your Google) must be pretty upset about someone else being called the first Maverick. We’re just sayin...Iris
Posted by Iris&David at 10:09 PM

And it seems that after several crucial weeks, the Dems may have finally moved on from the
Pit Bull / Ms Piggy thing - a calculated and well planned distraction that could cost them the election.

As per the Harry Truman era, we no longer live in that world. It's not about who's a joke, out of touch or perhaps even an idiot. And it's certainly no longer about who is qualified and/or who isn't... it's all about HOW to win the election (See Pit Bull / Piggy thing above)!